Did Bill Morneau even sleep a wink?

Politics Insider for March 26: Running on fumes, federal ministers take their emergency-aid road show to the Senate—and Ontario throws billions at the fight against coronavirus 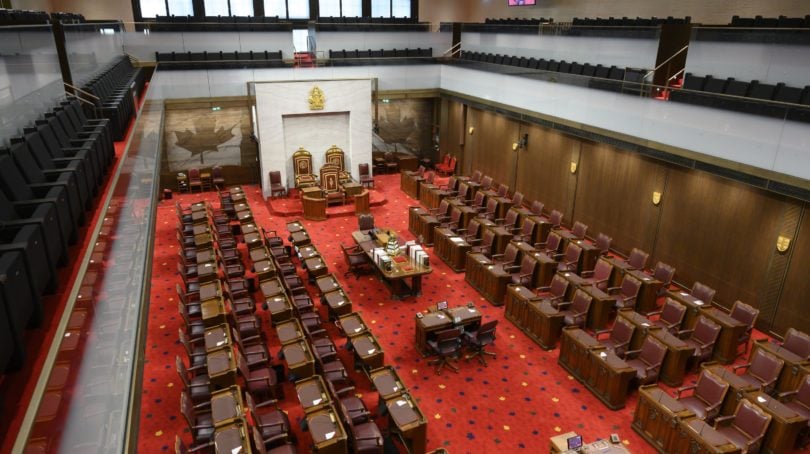 The Senate of Canada building and Senate Chamber are pictured in Ottawa on Monday, Feb. 18, 2019. (Sean Kilpatrick/CP)

Bill Morneau, the face of his government’s enormous federal emergency aid plan, defended and then supported his bill into the wee hours of Wednesday morning. Bill C-13 cleared the chamber just before 6 a.m. Only four hours later, the Senate convened its own rushed sitting. A few minutes later, Morneau strode into that chamber to hear from senators. If he slept, it wasn’t long. He’d swapped his suit, shirt and tie—blue, white and purple to black, blue and blue. He spoke in considerable detail about a bill he’d never have fathomed at the beginning of this month.

Morneau generated a headline when he promised help would be coming soon for Canada’s oil and gas sector.

Eventually, the finance minister made his exit (to light applause), and walked down the street to the government’s daily COVID-19 briefing. By noon, senators had passed the bill and awaited royal assent. Patty Hajdu and Bill Blair, who’d also pulled an all-nighter in the House alongside Morneau, took their questions. Hajdu, the health minister, wore sneakers. Blair, minister of public safety, hadn’t changed ties.

Hajdu took the opportunity to make some news, announcing that she’d enacted elements of the federal Quarantine Act that force travellers returning from overseas to self-isolate for 14 days. No longer is the government asking; they’re now telling.

Theresa Tam, Canada’s chief public health officer, also took questions from a seat in the third row—the second row on both sides of the Senate aisle was vacant, owing to strict social distancing. Surely, at this point Tam’s Bingo card is full. There’s almost nowhere in Ottawa she hasn’t testified. When senators set the trio free, they saw them off with a hearty round of applause. A few minutes later, they received notice of royal assent on C-13 (see the photographic evidence). With no business left to conduct, the Senate adjourned—for now.

As a bunch of his ministers caught up on sleep, Prime Minister Justin Trudeau once again spoke to Canadians from Rideau Cottage (his two-week self-isolation is, incidentally, nearly finished). The PM didn’t mention the unpleasantness of marathon negotiations behind closed doors that salvaged billions in financial assistance for those who need it most after Liberals had surprised the opposition with an attempt to shelve parliamentary scrutiny of federal spending until 2022.

Trudeau moved right on from that messy democratic exercise, but did talk about a signature program enshrined in the bill that’s now law: the Canada Emergency Response Benefit. The coles notes are that any worker who loses their income because of the coronavirus can receive a $2,000 cheque every month for four months. Read the full transcript here.

Coronavirus: The early show: What was the deal with that controversial Liberal gambit, anyway? Why did the party, which had generated goodwill across party lines, nearly scupper it all? Paul Wells, who recognizes that mistakes happen and everybody’s improvising, has some theories:

What on earth got into the Liberals’ heads? Mostly what was already there. First, the firm belief that no decision a Liberal makes is ever partisan, that only opposition to Liberals is partisan. Second, deep impatience with Parliament, a hallmark of Justin Trudeau’s time in government. (Remember when he got up from his chair to push people around because things were taking too long?)

In lieu of a provincial budget, Ontario finance minister Rod Phillips unveiled an economic and fiscal update that included a $17-billion aid package for businesses and workers hit by the coronavirus: $7 billion in direct support and $10 billion in tax deferrals. The measures bump the province’s 2020-21 deficit over $20 billion.

Foreign Minister François-Philippe Champagne‘s office released a “readout” of a videoconference call with his G7 counterparts. As readouts tend to do, this one avoided almost any colourful description of the conversation. Not included was Der Spiegel‘s scoop that the ministers couldn’t agree on a joint communique because U.S. Secretary of State Mike Pompeo insisted on calling COVID-19 the “Wuhan virus,” as is his wont. The six others weren’t onboard.