Tease the day: The Boston bombings and the fertilizer explosion in West have reporters scrambling for answers 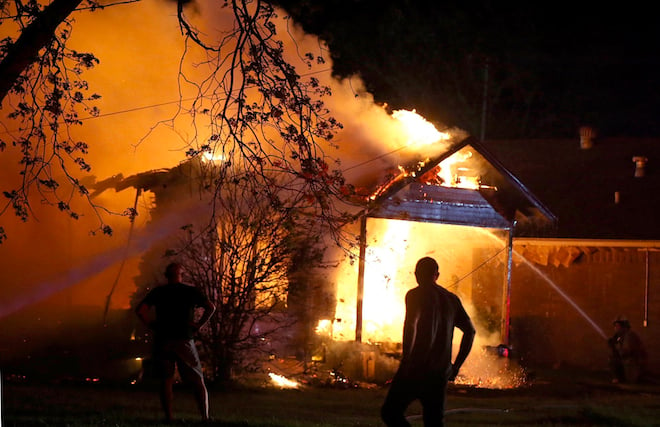 A person looks on as emergency workers fight a house fire after a near by fertilizer plant exploded Wednesday, April 17, 2013, in West, Texas. (AP Photo/ Waco Tribune Herald, Rod Aydelotte)

We’re all waking up to a monstrous explosion at a fertilizer plant in West, Texas—a small community near Waco—that’s killed at least five people, injured dozens, and caused untold damage. The enormity of the blast, which actually registered at 2.1 on the Richter scale, is hard to fathom. Some of the first video emerging from the scene has already found its way to YouTube. On the other side of that link is a loud, disturbing video at the moment of the explosion: it’s not graphic, but it evokes the kind of disorientation that strikes victims of such a jarring experience. The destruction in West is, well, as widespread as you’d imagine in a small Texas town.

The explosion eluded headlines almost entirely, save for one hurried note in this morning’s Ottawa Citizen. But expect reports from Texas to dominate the news today, as anchors and reporters pivot between the casualty count in West and any news coming out of the investigation into the Boston bombings. After a span of relative quiet, disaster journalism is, once again, ubiquitous.

What’s above the fold this morning?

The Globe and Mail leads with U.S. President Barack Obama’s disappointment at failed gun control legislation. The National Post fronts an uncertain day in Boston. The Toronto Star goes above the fold with the gun trade into Canada from the Interstate 75 corridor. The Ottawa Citizen leads with the appointment of Bruno Saccomani, formerly Prime Minister Stephen Harper’s lead security detail, as ambassador to Jordan. iPolitics fronts polling that claims the Liberals are winning the battle for immigrant votes. CBC.ca leads with the explosion of a fertilizer plant in West, Texas, that’s killed at least five people. National Newswatch showcases Postmedia‘s story about Saccomani’s appointment.

Stories that will be (mostly) missed