Dispatches from the Ottawa biography wars

Paul Wells on Andrew Scheer's new 'people-like-me' (read: not Justin Trudeau) sales pitch and the things he chooses to include in life story 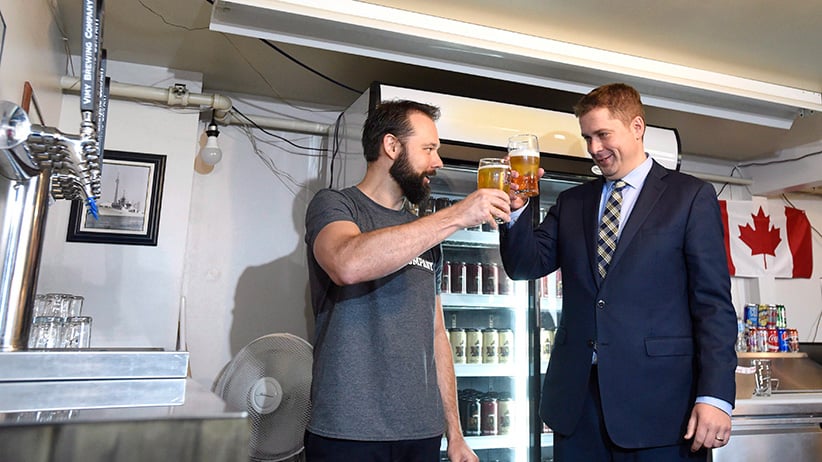 “I grew up in the kind of family lots of Canadians would recognize,” Andrew Scheer says in his latest Facebook get-to-know-me video.

Really? What sort of family is that, and how does it contrast in electorally useful ways with the bizarre family rituals of certain hypothetical other incumbent leaders?

“My mom was a nurse. My dad worked for a newspaper,” Scheer continues. So far, so normal. (I checked: His dad wasn’t a reporter, which in the struggle for grassroots credibility must count as extraordinary good luck.) “They had to make a lot of sacrifices for me and my sisters. It wasn’t always easy. Like a lot of people I had to take the bus everywhere because our family didn’t have a car. And I learned you have to have a pretty good pitch if you’re trying to get a girl to meet you for a date at a bus stop.”

One wants to reach back in time to young Scheer and tell him that part of his pitch should involve reassuring his romantic interests that the bulk of the date wouldn’t actually take place at the bus stop. But he seems to have done fine without our help, because he married young and now has five smiling children.

“I always had to get a job to pay my own way,” Scheer says. “I think that’s a lot of people’s experience.” Well, yes, a lot of people who weren’t literally born at 24 Sussex Drive. “I had a paper route as a kid. I sold popcorn at football and hockey games. I’ve been a waiter.” This gave him insight into the importance of “local businesses,” a term Scheer has lately used in his fight against Bill Morneau’s proposed tax changes. “I worked for an insurance broker at a family-run business.”

READ MORE: Andrew Scheer of the suburbs vs Justin Trudeau and his throngs

Why, Andrew Scheer has built his life in the kind of institutions now under attack from the tax-changing depredations of Bill Morneau and the Liberals. Not that the ad says so explicitly. You’re just supposed to put two and two together. Anyway, Scheer concludes, his fondness for the type of upbringing common to families most Canadians would recognize is “why I’m in this.”

Despite some editing peculiarities—all the time Scheer talks about sacrificing for a life that’s not easy, the ad shows Scheer and a staffer gliding elegantly through the marble hallways of Parliament’s Centre Block—this is a pretty good example of campaigning via biography.

It’s in the nature of such products that they’re needlessly coy. Scheer never does get around to saying whose coddled and decadent upbringing he was saved from, but I don’t think the Conservatives would be crushed if viewers’ thoughts turned, entirely spontaneously, to Justin Trudeau. Now, it’s true that Trudeau’s father worked for the newspapers too, sort of, but in most other particulars his early life contrasts with Scheer’s. Pollsters often check whether respondents believe a given political leader “understands people like me.” The Conservatives’ hope is that Scheer will be seen to understand, and will himself become easier to understand.

Stephen Harper started to emphasize his own humble upbringing when Paul Martin, the millionaire son of a political lifer, became Harper’s chief opponent in 2003. But this is hardly only a Conservative gambit. In Alberta it’s become pretty common lately to hear members of the embattled NDP government explain their policy choices by saying “parents understand” this or that. We are expected to fill in a blank: that Jason Kenney, who is not a parent, doesn’t understand.

It’s normal, when engaging in biography politics, to skip lightly over certain unhelpful details of one’s own biography. Scheer, for instance, does not mention that he has been a Member of Parliament making more than $100,000 a year from taxpayers, with gusts to nearly $250,000, since he was 25. Or that he lived for more than half a decade at Kingsmere, the stately Speaker’s residence in the rolling Gatineau Hills, a commute easily navigated when one has a car and driver at one’s constant disposition.

Nobody should begrudge any MP or any former Speaker such things. And indeed I’d go so far as to say a lot of Canadians would recognize them as a reasonable part of a dedicated public servant’s lifestyle. But one cannot squeeze everything into a short video, and these are the parts Scheer left out.

It should come as no surprise that the Conservatives are emphasizing lifestyle as they go about introducing their new leader to Canadians. Harper’s work to contrast his own life with Martin’s eventually helped him win. And after the year the Liberals have had, culminating in Bill Morneau’s tax trauma and Trudeau’s comeuppance at the hands of the ethics commissioner, they have nobody to blame but themselves if they’ve opened up room for attack on their people-like-me flank.

Not that biography is everything. Scheer establishes his credentials as a bus-rider, and elsewhere has complained that the Liberals have scrapped the Conservatives’ public transit tax credit. It will be up to voters who commute to decide whether that’s more important than the Liberals’ sharply increased spending on public transport.