In her Simcoe-Grey riding, people are denouncing and defending Kellie Leitch. But there's one thing that unites them. 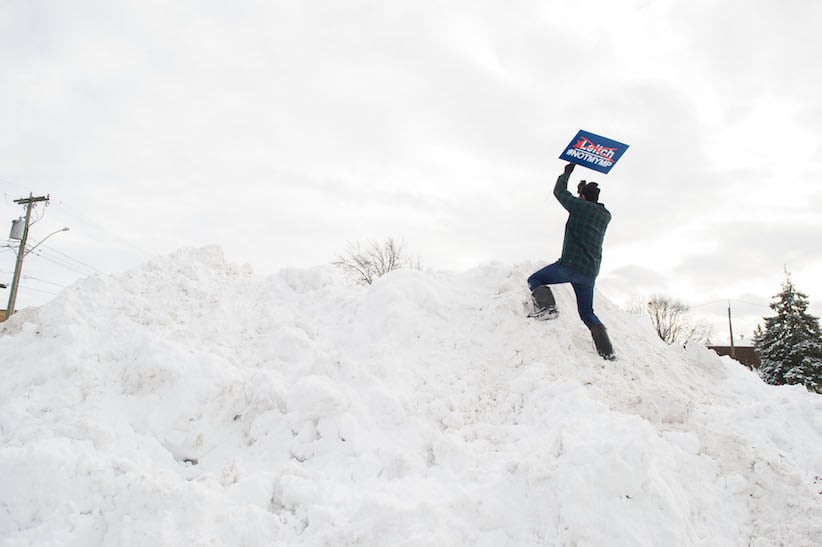 Mark Ruzylo, one of the co-founders of a movement against Conservative party MP Kellie Leitch, places a #NotMyMP sign in the Collingwood area of Ontario. (Photograph by Cole Garside)

The scrambler is Mark Ruzylo, a constituent in Kellie Leitch’s riding of Simcoe–Grey, Ont. who started distributing signs in late November reading, “Kellie Leitch #NotMyMP.” Back by demand, Ruzylo and his family and friends spent Saturday selling 200 signs in three townships across the riding. Their slogan now appears in constituents’ driveways, windows and windshields and has a loud voice on social media; hark, the hashtag sings from Twitter accounts between Halifax and Yellowknife.

“People are saying, ‘I don’t want to name her anymore,’ ” says Ruzylo. “We’re going to refer to her as ‘hashtag Not My MP.’ ” In the town of Avening, where Ruzylo decks the community hall with his signs, constituents complain that Leitch is out of touch with them. She recently announced on Twitter that she supports legalizing pepper spray so women can defend themselves from attackers; meanwhile, her riding’s police detachment has opened a wellness centre to try to prevent the need for self-defence. Leitch reported a false-alarm break-and-enter at her house, but Ruzylo says the community is so safe that he hasn’t locked his door in 12 years. In last week’s Conservative leadership candidates’ debate, Leitch stuck to her call to intensify screening of immigrants, but her riding currently depends on migrants from Jamaica and Mexico to work on Christmas tree farms.

“I’m shocked at her attitude,” says Joan Carruthers, a constituent selling crafts at a Christmas market on Saturday, where Ruzylo’s team sells signs. Carruthers denounces Leitch for endorsing Donald Trump (leadership candidate Maxime Bernier called Leitch “a karaoke version of Trump,” and the anti-Leitch slogan is a play on the anti-Trump campaign, “Not My President.”) When the president-elect appears on television, Carruthers mutes him, and she would do the same for Leitch, despite her husband protesting against the interruption. “I’m the one that operates the remote control,” Carruthers says. 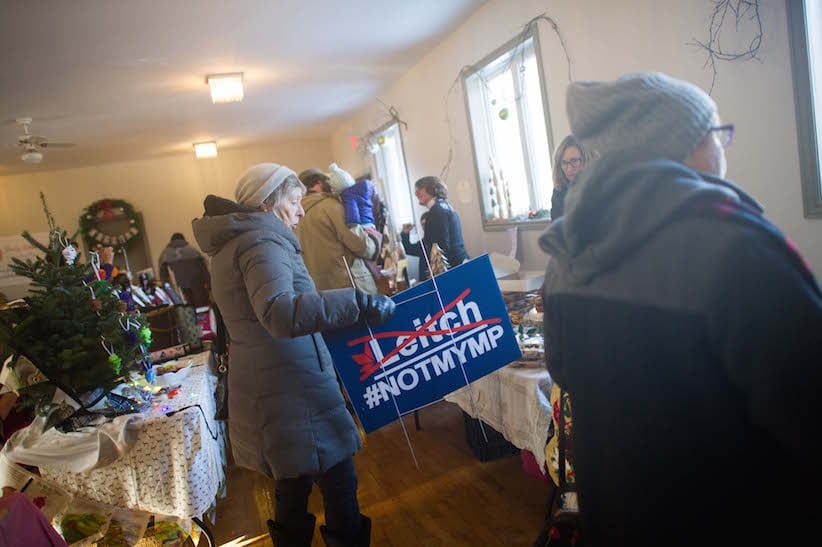 However, for Leitch’s supporters, the signs are not just good old holiday activism. “They should be burned,” says Fred Hamilton, a fourth-generation farmer who produces about one million chickens per year for retailers including Swiss Chalet and Costco. “It’s a disgrace.” At a Santa Claus parade last Saturday, Hamilton says, “a lot of people told me they had to contain themselves from going and ripping them down. A minimum of 25 people were really disgusted.” Indeed, Leitch has a steadfast base, as her rhetoric against “the elites” resonates with people in her region’s town of Collingwood and surrounding villages. Although Collingwood was an internationally renowned shipping hub in the 1800s, its port closed in 1986, and the region has since suffered the closure of canneries and a Goodyear plant. The riding has voted Conservative since 2004, giving Leitch 46.6 per cent of the vote in 2015.

Leitch’s supporters are restraining their anger to words alone. “I wouldn’t put up a sign saying, ‘I support Kellie Leitch,’ ” says Bob Giffen, a fruit farmer. “I’m not into the conflict.” However, Giffen says, “she’s our MP, no matter what they say. I don’t think she needs to be bashed.” Giffen says Leitch has listened to him when he tells her about the need to protect Canadian manufacturing. “It upsets me to see [that] juice concentrate all comes from China,” he says. “It’s a crime that we don’t have people making applesauce and canning peaches. You can rest assured that every peach in a can is coming from Taiwan.”

“Peach” is a nickname that Ruzylo is considering for Leitch herself. It hints at “impeach” and is easier to say than “Not my MP.” Given his duties as a father of three and a high school vice-principal, Ruzylo doesn’t plan to expand the campaign to the site of the leadership convention in May, the location of which remains undetermined. However, he continues his campaign locally, sometimes scooting into traffic to offer a sign to a driver who honks and handing out complimentary images of Leitch portrayed as the Grinch.

Despite their differences, supporters and denouncers both share Canadian pride. While the farmers are proud of Canadian products, Ruzylo, too, adores the land, once moved to tears while driving by the Georgian Bay, singing the lyrics of the Stan Rogers song, “Northwest Passage.” And while Ruzylo denounces Leitch atop the snow, her supporters will endorse her in the race to the top of Canadian politics. “It’d be nice,” muses Giffen, “to have a prime minister right next door.”