Do Peter MacKay or Erin O'Toole stand a chance against Justin Trudeau?

Politics Insider for May 22: A new Abacus poll reveals the same cleavages, cities have a new leader in Ottawa and Shopify goes 'digital first' 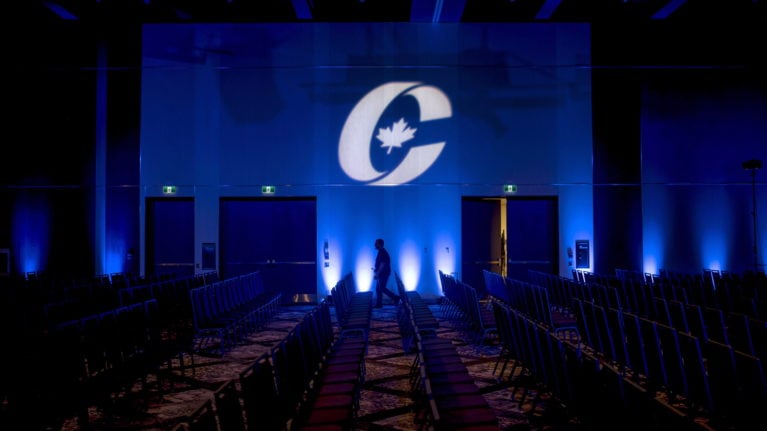 A man is silhouetted walking past a Conservative Party logo before the opening of the Party's national convention in Halifax on August 23, 2018. (Darren Calabrese/CP)

In the before times, horse-race polling was all the rage. But as partisanship took a back seat to emergency sittings, spending and scrutinizing, who even had time to talk about voter intentions? Of course, that break from political reality was always going to be temporary. (Philippe J. Fournier crunched the numbers earlier this month on all the most recent polling.)

Now, a new Abacus poll surveyed the nation’s voters and the results revealed all the same regional cleavages, some exacerbated. Outside of Alberta and Saskatchewan, the Liberals have sewn up 42 per cent of the vote, a 15-point lead over the Tories. Within those two Prairie provinces, the Conservative vote has held steady at 54 per cent, 31 points more than the Liberals. It’s not even close in the Atlantic, and Team Trudeau holds a commanding lead in all-important Ontario.

Oh, and Abacus has both Peter MacKay and Erin O’Toole—whom the Hill Times reports are waging digital war against each other—trailing Justin Trudeau badly in head-to-head polls.

Pyrrhic victory: Just a single day after an Ontario judge overturned Jim Karahalios‘s banishment from the Tory leadership race because the subcommittee that booted him didn’t have the jurisdiction, the committee that did have the authority wasted little time in showing Karahalios the door.

Canada’s cities have a new top dog in Ottawa. Carole Saab, a lobbyist whose run at the Federation of Canadian Municipalities (FCM) spans a decade, will take over for retiring CEO Brock Carlton this summer. Before she was an FCM mainstay—and named consistently by the Hill Times as one of the city’s top lobbyists—Saab spent four years working inside Jack Layton’s NDP.

The FCM has been pushing the feds for a multi-billion-dollar funding serge for cities hit by the pandemic. And it has been active on Parliament Hill, lobbying officials in the Prime Minister’s office and an array of other important places in Ottawa.

If your prime-minister-calls-world-leaders Bingo card had the president of Mozambique, Filipe Nyusi, cross that off the list. Trudeau spoke with Nyusi yesterday and thanked him for “ongoing help” to repatriate Canadians from the southern African nation. Today, the PM will try to burnish Canada’s credentials in a virtual meeting with UN representatives of Arab League countries. Meanwhile, the Canadian Press scored an interview with Marc-André Blanchard, Canada’s UN ambassador, as he heads back to New York City for the home stretch of the Security Council election.

Meng Wanzhou will be thrust into Canada’s spotlight again next Wednesday when a B.C. judge will release her findings on whether or not Meng’s alleged crimes in the U.S. would be considered crimes in Canada. If they’re not and Meng prevails, she could be a free woman. Otherwise, Associate Chief Justice Heather Holmes would then hear arguments from the defence team about Meng’s alleged mistreatment during her arrest. Either way, a decision on her extradition to the U.S. hangs in the balance.

A new non-profit with some serious political power players from all over the political spectrum and corporate world hopes to mitigate the impact of COVID-19 on women in Canada. The Prosperity Project is headed up by Pamela Jeffery, a founder of the Canadian Board Diversity Council. The team includes 60 women including former Ontario privacy watchdog Ann Cavoukian, Indspire CEO Roberta Jamieson, former B.C. premier Christy Clark, Ontario Liberal MPP Mitzie Hunter and Sleep Country Canada founder Christine Magee.

Shopify CEO Tobi Lutke dropped some mega-news on Canada’s tech community yesterday, tweeting the company would go “digital by default.” When Canada’s most valuable company makes a decision like that, questions inevitably follow. A city councillor in Ottawa, the home of Shopify’s HQ, wondered if the company would still locate its workers in the city. How would the move not disadvantage women? Would the company upgrade everyone’s internet? What does it all mean for real estate markets? And what of Shopify’s reputation for having tricked-out workspaces?

Progressive progress redux: The little Senate grouping-that-could now has enough senators to constitute a “recognized” group in the chamber. The Progressive Senate Group netted another turncoat, Pierre Dalphond, from the Independent Senators Group. Dalphond told CBC News he was dissatisfied by recent moves by the “facilitator” of the ISG, Yuen Pau Woo. Peter Harder crossed over just last week. Woo, for his part, blames recent defections on a misunderstanding.

The Senate has stumped your humble newsletter correspondent. A quiz in the red chamber’s newsletter challenged readers to launch a virtual tour of Centre Block and identify, among other trivialities, an NHL logo. If you find it, please email us the team name and the logo’s location in Centre Block. The first reader to educate us gets crowned Politics Insider Nerd of the Week.

The family of Maxime Miron-Morin, one of the HMCS Fredericton personnel who recently died at sea, released statements to the public yesterday. His wife, Kathryn, wrote that Miron-Morin had a “rare ability to teach himself anything. His mother, Marie-Claude, wrote that a Rubik’s Cube was “always close at hand”—even an 8×8 cube—and he could solve them with his eyes closed. Marie-Claude wrote that she “was not reassured” by his deployment overseas, but Maxime assured her he’d be okay. “His desire was so strong,” she wrote. “I could feel it.”