Dodging and weaving Quebec's Bill 21 on the campaign trail

Politics Insider for Sept. 9: Cuzner's regret, how to fight trolls and the credibility question facing the leaders 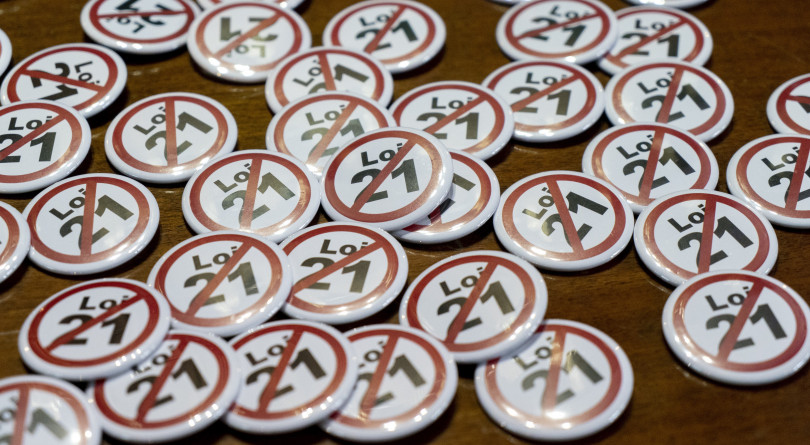 Badges are seen as part of a campaign in opposition to Quebec's secularism Bill 21. (Paul Chiasson/CP)

Debate week is here: On Thursday Maclean’s and CityTV will host the first leaders debate ahead of the Oct. 21 election. The editorial from the latest print edition explains why Maclean’s is hosting this debate:

There’s a federal election around the corner—at press time it had not yet been officially called, but our money is on Oct. 21—and once again politicians are eager to explain how beneficent and pleasurable life will be under their doting rule. Left as a series of uninterrupted monologues, however, the various forms of political grandstanding, exaggeration and misinformation that comprise a typical campaign offer little to properly inform the electorate. To truly grasp the pros and cons of each party and its leader, you need to get them all in the same room and make them talk. You need a debate. In fact, you need several. (Maclean’s)

Have your say: Don’t forget to submit a question you want the leaders to answer. Go here to do that.

Not safe or sound: The latest seat projection from 338Canada shows that while the Liberals might have an edge over the Conservatives, it’s far from a solid lead. Based on recent surveys the Liberals are positioned to win an average of 165 seats (five short of a majority) versus 141 for the Conservatives. However 338Canada’s Philippe J. Fournier dug deeper by breaking the results down into safe, likely, leaning and toss up projected seats for each party. As he writes:

The Liberals are projected leading in 63 districts that are labelled either “leaning” or “toss up”, by far more than any other party. In Quebec, a modest two-to-three point swing to the Bloc or the Conservatives could flip several rural seats in the province. (Léger measured the Liberals at only 29 per cent in Quebec outside of Montreal and Quebec City.) In Ontario, among the 30 GTA districts, more than half are projected leaning or toss ups, including several with the Liberals as current favourites. A moderate slip in the region could also hurt the Liberals and return the edge to the Conservatives. (Maclean’s)

Do-over: With Liberals hammering Andrew Scheer‘s Conservatives daily on social issues, awkward questions have regularly come up about those Liberals who themselves voted against same-sex marriage 15 years ago. In 2004 ahead of a historic vote to legalize same-sex marriage Liberal MP Rodger Cuzner polled his constituents and, finding most opposed to the idea, joined dozens of other Liberal backbenchers, along with most  Conservatives, to unsuccessfully vote against the bill. It’s one vote he’d take back if he could, he writes:

Rather than summoning the courage to do what I knew in my heart to be right, I cast my vote and then spent the following months trying to convince myself that my decision was principled. I had hidden behind a promise I had made to my constituents that night in Inverness.

I disappointed several people that night, people I care about deeply—not the least of which was my late mother Kay, a life-long liberal, a progressive and community activist. I disappointed Mr. Chretien, and many of my friends, some who never pass up an opportunity to rib and remind me of that vote. And I disappointed many gay and lesbian Canadians who sought only to be extended the same rights to marriage as their fellow citizens. (Maclean’s)

It worked so well before: Having struck blows against Scheer on the issues of abortion and same-sex marriage, the Liberals have picked up a new social issue thread to pull at — Scheer’s apparent tip-toeing around the issue of private school tax credits. While Scheer last month said he wouldn’t go ahead with promise for the tax break “at this time,” Liberals are pouncing on that qualifier, which Scheer repeated last week. “Andrew Scheer would weaken Canada’s public education system with a reckless plan to fund private schools,” said Employment Minister Patty Hajdu. (Huffington Post)

Enough. Full stop: With online abuse targeting Environment Minister Catherine McKenna now spilling into the real world, McKenna revealed she sometimes requires a security detail, something not typically afforded to Canadian cabinet ministers. “There are places, yes, that I have to have security now and I don’t think that’s a great situation,” she told the Canadian Press, while describing some of the verbal assaults she’s been subjected to while out with her children. “I’m someone who is trying to do my job, live my life, and talk and engage with people, and it makes it harder. I’m not going to let this stop me but I wish it would stop.” (Canadian Press)

While the revelation about real-world verbal abuse against McKenna brought out the usual trolls and conspiracy theorists, the attacks drew condemnation from across the political spectrum, with Stephen Taylor, the former digital director of Scheer’s Conservative leadership bid and no fan of McKenna’s policies, laying out a trenchant case for blocking, and not just muting, abusers on Twitter: “Blocking an account is a signal to a troll that their twitter world just got smaller. Blocking removes the troll’s ability to use the real estate in your replies to spread troll content/narratives to other trolls. … Indeed, public figures DO HARM to the twitter ecosystem when they shuck their responsibility to quarantine bad faith actors and vile trolls. Narrow their world. Build fences in their playground. DO YOUR PART! BLOCK FREELY AND BLOCK OFTEN.” (Twitter)

WTO bound: With a new ambassador in place (albeit one who might have been a better fit for the job if this was, say, 2017) the Trudeau government has finally acted on calls by long-suffering canola farmers to take China’s blockade of their shipments to the World Trade Organization — a course of action Scheer, along with farmers and the province of Saskatchewan, have been urging for months. “We’d been calling for the national government to initiate the WTO challenge from virtually day 1 of the Chinese decision to exclude canola into their market,” said Saskatchewan’s Trade and Export Development Minister Jeremy Harrison. “If they had initiated it in April, when I think was when we first asked them to do that, that would have been six months further along in this process than we are right now.” (Canadian Press)

Didn’t catch the weekend political shows? Here’s what you missed

Be there: With political headlines last week dominated by the feud between the NDP and Greens after several New Brunswick supporters of the former jumped ship to the latter (or didn’t) Green leader Elizabeth May used her appearance on CTV’s Question Period to lambaste Jagmeet Singh for his neglect of New Brunswick voters: “The problem they have is that Jagmeet Singh let down their members in New Brunswick by never visiting. It’s been two years he’s been leader, in that time I’ve been there three times… First rule of leadership is you have to show up,” May said. “I’m really astonished by this trumped-up anger that we’re seeing from the NDP. I wish we could talk about things we have in common instead of creating this really rather pointless diversion.” (CTV News)

Unchallenged: Will Quebec’s Bill 21 banning civil servants from wearing religious symbols be an issue in the campaign? Given the tap dancing around the debate among MPs representing the Liberals, Conservatives and NDP on CBC’s The House, it seems all three parties would deeply prefer if it didn’t. But some positions became clearer — Conservative MP Gerard Deltell vowed a Scheer government would not challenge the Quebec bill in court while NDP MP Guy Caron, whose boss wouldn’t not be allowed to wear his turban if he worked for the provincial government, said the party still “respect(s) the right of Quebeckers” on the issue. Other positions remained murky as ever — asked directly and repeatedly if Trudeau would launch a legal challenge against the bill after the election, Liberal MP Marc Miller refused to deviate from his talking point: “You can expect the Prime Minister to behave precisely the way Canadians expect him to behave.” (CBC News)

In-credible: What will decide the election next month? Speaking on Global’s West Block Darrell Bricker, the president of Ipsos Public Affairs, said he thinks it will come down to credibility: “In this day and age it really comes down to the leaders of the parties and whether or not they’re perceived as being credible, and whether or not they (voters) perceive a connection. Justin Trudeau was able to make that commitment in the last election and was rewarded with a majority government … the question now is who can steal that?” (Global News)