'Nigel Wright watched Bayne warily, his eyes screwed into him like bolts.' Nicholas Köhler reports from the Duffy trial 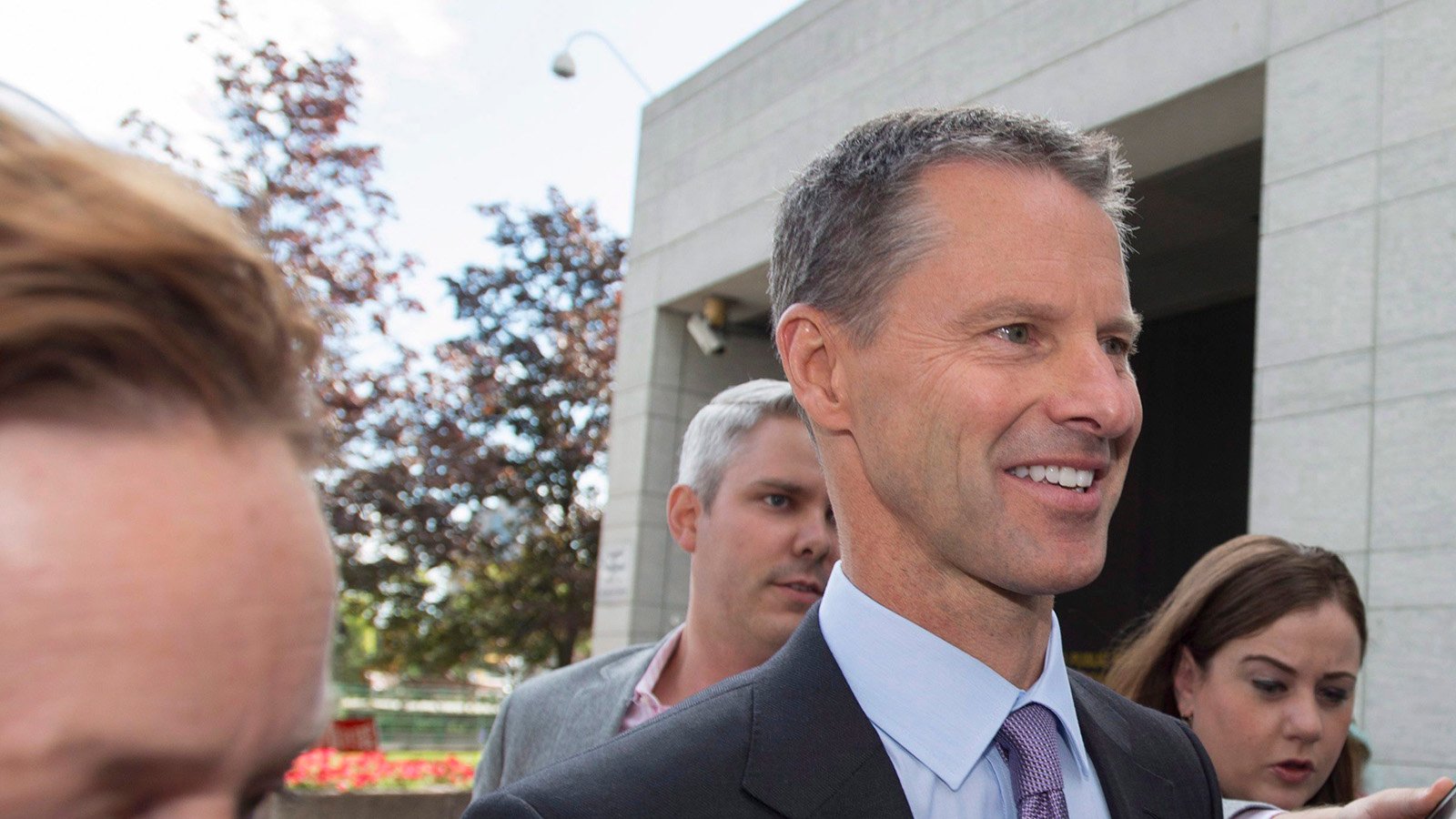 Nigel Wright, former chief of staff to Prime Minister Stephen Harper, arrives with his lawyer Peter Mantas (right) at the courthouse in Ottawa on Thursday, Aug. 13, 2015 for his second day of testimony at the criminal trial of embattled Sen. Mike Duffy. (Justin Tang/CP)

One minute, a loyal yet disgraced servant to the PM sits in the witness box, still defending the boss who, for the sake of political expediency, has cast him adrift, condemned him.

Next, the judge calls for a routine break in the proceedings—we’re in the course of a high-profile political trial, you see—and during the recess that follows, that very boss, seen on live television from the campaign trail, condemns the servant anew.

Perhaps that loyal servant, shielded by friends from his vicissitudes, still doesn’t even know.

Sounds like TV hackery—don’t it?—the kind of brutal dramatic whiplash for which the screenwriter Aaron Sorkin is often castigated. His ’90s-era political TV drama The West Wing, which helps define the Clinton years for many Americans, was rife with this stuff.

Well, it’s not just Sorkin who resorts to such hokum. So does the God of this universe.

Consider the events in Courtroom 33, where Sen. Mike Duffy is on trial on 31 charges of breach of trust, fraud and bribery.

Bayne was examining Nigel Wright, Stephen Harper’s former chief of staff, and he wanted to know why fellow aide Ray Novak’s email to Wright relaying Stephen Harper’s edict on an aspect of the Senate expense scandal was one of very few emails on the matter that Wright had never given police.

The Novak email and another from Ben Perrin, the PM’s in-house counsel, were both redacted from Wright’s binder of Duffy-related emails.

“Privileged and not relevant,” he’d labelled them.

Wright explained that the Harper decision contained in the Novak communication—”Had I known we were going down this road I would have shut it down long before this memo,” the PM said of efforts by the Tory leadership in the Senate to nail down residence criteria for senators—was strictly part of a policy discussion, and not germane to an ethics commission inquiry for which Wright had prepared the materials.

Later, he said, after the RCMP launched a Duffy probe, investigators inherited the dossier as Wright had initially compiled it.

The explanation was barely plausible, and the room sniffed it.

As Bayne quickly pointed out, Wright had included just about every other email at his disposal touching on the expense scandal. Why did it appear he’d redacted only these?

Bayne’s suggestion was unmistakable: Wright remained Harper’s loyal disciple, and he’d failed to include the Novak email because he was protecting his former boss and the Conservative party brand.

This Harper communication, after all, put the PM at the very centre of high-level discussions around how to contain the Duffy expense-claim crisis. In his ruling, Harper had cannily identified the main issue, and it wasn’t about what constitutes residency for a senator: “This issue is about $’s,” Harper wrote, “not this.”

Bayne seemed reluctant to believe Wright’s explanation, and he asked Justice Charles Vaillancourt whether this wasn’t a good time to take the morning break.

It was during that recess, in the lobby outside, that reporters heard Harper’s live hit from Hay River, N.W.T.

Harper was responding to a journalist’s question about another email released in the course of the Duffy trial, this one from Wright to Novak and Perrin, concerning a payment Wright was making to Duffy that forms the basis for his three bribery charges.

“I will send my cheque on Monday,” Wright wrote his two colleagues.

Shouldn’t Novak, then an aide to Harper and now his chief of staff, get heat over this? the reporter asked Harper this morning.

Of course, this wasn’t the issue: Novak, having received Wright’s email, apparently knew Wright was personally covering the $90,000 Duffy was supposed to be providing the Canadian government as reimbursement for travel expenses he filed for simply living at home.

Those patently inappropriate expense claims were, nevertheless, likely not contrary to Senate rules, and today Bayne continued dredging through the details of the hundreds of emails that pinballed between Wright, his PMO underlings, and the Tory leadership in the Senate, all of them struggling with how to keep Duff from stinking up the joint.

Out on the campaign trail, however, Harper was skipping the issue of what he or Novak knew about that $90,000, and here in Courtroom 33 were the two most convenient dupes to stick it to. That’s just what Harper did.

For this and other reasons, Wright did not look good today.

Weak testimony, such as when he tried to explain the redacted message, or the resigned manner in which he greeted the emails Bayne highlighted showcasing his cool manipulation of Duffy in early 2013—hollow assurances followed by “command-and-control” language directing staff to shut the Duffy story down with an alternative, clearly less-than-truthful scenario—left Wright looking tarnished. He appeared to know it, and watched Bayne warily, his eyes screwed into him like bolts.

At one point Bayne pointed at him, jabbed his finger into the air, again and again putting it to Wright that he “forced”—Wright’s word—Duffy into a scenario he wanted no part of. The mistake-and-repay story in which Duffy said he got the expenses wrong and would pay (they agreed he would say this even though it was Wright who eventually coughed up the lettuce).

Bayne accused Wright of strong-arming Duffy to the point of threatening him with ejection from caucus—”You’re going out of caucus if you don’t play this game,” Bayne said, and Wright replied that Duffy might even have believed the situation worse than that.

“I think he took it as a threat he’d be removed from the Senate overall,” he said.

Wright, meanwhile, maintained Duffy was a participant in all this—that he was part of drafting the scenario in which he’d be the star, and that demonstrated to Canadians he was paying for his mistake. “Sen. Duffy was a participant in the development of those scripted lines,” Wright said at one point, which prompted someone in the gallery to inexpertly stifle a laugh. By the look of his neighbours in the front bench, the laugh-stifler was Duffy himself.

Bayne says Wright did these things to stop, in the theatrical words Wright and his underlings used in emails, “our public agony,” to “staunch the bleeding,” to end the “Chinese water torture of new facts in the public domain, that the PM does not want.”

“That’s not the language of ‘doing the right thing,’ that’s not Matthew,” Bayne said, referring to Wright’s talk of the Bible yesterday. “That’s issues management.”

Wright was forced to agree.

Quoting Matthew, talking about Chinese water torture, about “our public agony”—such purple language, again, recalls the highfalutin Sorkin scripts for The West Wing. And like the characters in that now-defunct TV program, Wright and his team and the Tory senators they are trying desperately to corral often come off in their emails as too clever by half—the “kids in short pants” Duffy spoke of in his address to the Senate later in 2013.

Prone to banging out high-blown, lengthy emails, as though emulating their fantasy-land brethren, dreamed up by Sorkin, those inhabitants of a phoney D.C.

And like Sorkin, Wright is capable of the human touch, too.

Today, although he appeared reluctant to say it, he outlined the reasons Duffy told him he could not afford to repay the expenses he continued to believe he had every right to claim—that $90,000. With his bum heart, he could go at any time, and he needed to be able to leave his wife Heather something if he did, Wright said.

Perhaps that makes it a good deed.

“Sir,” Bayne told him, putting an end to the digression. “That is all your side.” Duffy will have a chance to give his. It too may sound like fantasy.