Donald Trump promises to do Justin Trudeau a solid with China. 'We'll see.' 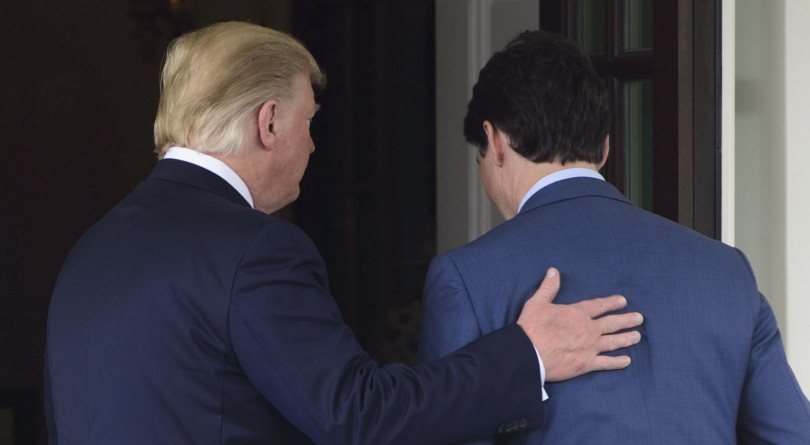 Prime Minister Justin Trudeau is greeted by U.S. President Donald Trump as he arrives to the White House in Washington, D.C. on Thursday, June 20, 2019. (Sean Kilpatrick/CP)

Uninfluenced: So it turns out when Elections Canada actually took a closer look at the 13 social media influencers it had selected to persuade young Canadians to vote, and who Conservatives doubted were genuinely non-partisan, some sure seemed to have partisan leanings. As such Chief electoral officer Stephane Perrault scrapped the video campaign. After the names of the influencers were released—they included athletes, YouTubers, a comedian, a TV host, an actor, a blogger, a photographer and First Nations and disability rights activists—the Tory research squad swung into action. Among the seemingly partisan posts, one praised Justin Trudeau‘s gender-balanced cabinet, among other initiatives, with the hashtag  “#mancrushfriday.” (Canadian Press)

But aside from the potential that some of the influencers had partisan leanings, Conservatives have objected in general to efforts encouraging more young people to vote, since when those whippersnappers do vote it tends to not be for Conservatives. Expect Team Scheer to keep hammering away at that message since Perrault isn’t backing down from voter outreach efforts: “We remove barriers for seniors without asking ourselves whether seniors vote one way or another. We remove barriers for Indigenous (people) without asking ourselves whether they vote one way or the other. We remove barriers based on evidence that barriers exist. … I think it’s quite unhealthy if we start going down that road and then we’ll have to question ourselves as to whether we should have special voting opportunities for seniors in long-term-care facilities.”

Meanwhile, Elections Canada revealed it has already paid the influencers their part of the $650,000 campaign budget, though the agency is trying to recover some of the rest of the money from production companies. (Global News)

Pals again, for now: Trudeau’s relationship with Donald Trump has now gone full circle—from “Justin is doing a spectacular job” to “very dishonest and weak” back to “He’s been a friend of mine. We’ve worked hard together,” as the President said when Trudeau flew to Washington to meet him Thursday. While the two talked about ratifying the CUSMA/USMCA trade deal, the bigger purpose of his visit was to enlist Trump’s help in freeing two Canadians detained by China when Trump meets China’s President Xi Jinping at the G20 next week. The signs were positive: “I’ll represent him well, I will tell you,” Trump said. “We’ll see what happens, but anything I can do to help Canada I will be doing . . . I would, at Justin’s request, I will actually bring it up.” (Canadian Press)

Aiming low: When Andrew Scheer released his climate change plan this week, much of it was focused on the idea that Canada can buy carbon virtue abroad, which if you’ll recall was a notion Stephen Harper used to mock. But it would be churlish to demand that Scheer’s plan make too much sense, writes Paul Wells, for two reasons:

First, Scheer’s goal is not to find the best plan to meet Canada’s climate targets. It’s to fill a 60-page climate position paper with everything he can think of that isn’t carbon taxes. In Everyone… But the People, an account of a 2015 Vancouver-region transit-tax referendum co-written by Scheer’s campaign manager Hamish Marshall, we find this bit of wisdom: “All good campaigns are based around two messages—an offensive or ‘sword’ message to define the election and to take down your opponent, and a defensive or ‘shield’ message to protect against any attacks thrown at you.” Climate is a shield issue for Canadian Conservatives. Scheer just wanted a pamphlet he could wave around and say, “I’ve got a Real Plan.”

Second, Scheer would hardly be the first leader to make little sense on carbon emissions. Justin Trudeau’s 2015 Liberal platform mentioned “carbon” 10 times. Six of those mentions were in reference to a federal fund that would reward virtuous behaviour. The other four mentions of a “carbon price” included not the slightest detail of timing, rate, incidence, or any other useful element of program design. In the event, the Liberals are introducing a carbon tax in their fourth year in office, designed to ramp up slowly and top out, we learn, well below the rate serious analysts say would be needed to reach Canada’s 2030 Paris targets. (Maclean’s)

Aiming lower: Introductions are in order: Liberal climate plan that doesn’t do enough, meet the Conservative plan to do even less, writes Andrew MacDougall:

Scheer has clearly made the calculation that doing even less than Trudeau is good enough for his immediate electoral purposes, if not the planet’s long-term prospects, as voters’ claims to be concerned about climate change have historically outstripped their desire to act, a worldview boosted this week by the release of yet another study showing Canadians still aren’t willing to put their wallets behind their words when it comes to the environment. Is the Conservative strategy cynical? Yes. Is it smart? We’ll see. (Maclean’s)

That’s a wrap*: When the House adjourned Thursday, it may have been for the last time before the election. MPs agreed the day before to wrap things up a day early, though depending on whether Washington makes headway in ratifying the trade deal, MPs may be called back over the summer to do the same with USMCA here. Regardless, the House has passed most of the government’s outstanding legislation. The finally tally for the 42nd Parliament: 74 bills passed. That compares to 122 government bills during the four years of the Harper government’s majority, though the Liberals will tell you it’s not an apples to apples comparison—Harper never had to contend with an independent-ish Senate. (CBC News)

More booze, not more boos: Maybe it was standing in front of a million hecklers that did it. Whatever the case, Premier Doug Ford, who his critics have repeatedly compared to Trump, took a page from the orange-hued commander-in-chief and fired the biggest names in his cabinet. Well, demoted them. It’s the same thing when you’re talking about a finance minister just one year into his job who only delivered his first budget 10 weeks ago. (Global News)