Nov. 19: The Ontario government's planned cuts to Francophone services in the province have Trudeau and Scheer sounding an awful lot alike, while Canada's defence minister warns of Russian interference in the next election 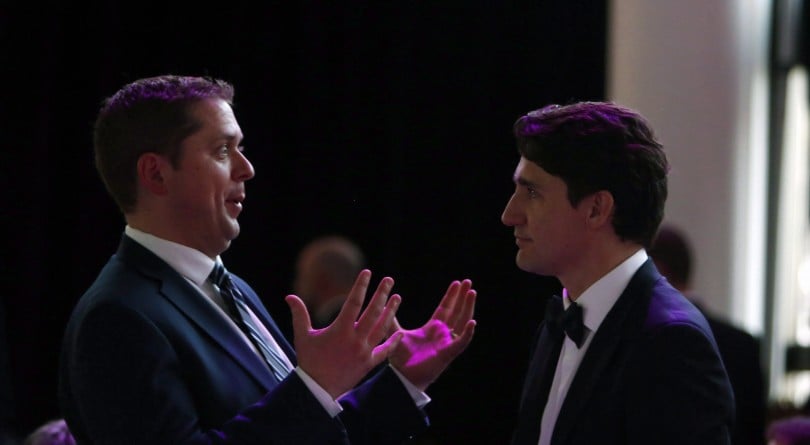 With mutiny in the British Tory ranks, the resignation of key cabinet ministers, a collapsing pound and massive uncertainty over Prime Minister Theresa May’s Brexit deal with Europe, the U.K. is marching face-first into a self-made mess of biblical proportions, writes Tabatha Southey:

This week, just about everyone who actively supported Operation Drown Our Nose To Spite Our Face began bowing out of actually running it, two by two, making their way to the nearest resignation ark as the water rises as if they never themselves called out, “Make it rain!”

Brexiteers won’t quietly disappear, of course. Nor will they ever admit that maybe dropping out of the EU on the assumption that this would somehow just undo the last couple centuries and make Britain a great power again, with all its former colonies lining up to provide it with new, more racist-friendly trade agreements, was a bad plan. They’ll just demand votes of non-confidence on Theresa May’s leadership, and decry the failure of everyone else to deliver on their promises. (Maclean’s)

Against the backdrop of that chaos, Conservative Leader Andrew Scheer has reaffirmed his support for the Brexit vote. “I do believe that the U.K. over the years has given up a tremendous amount of sovereignty,” he told the Canadian Press. “The bureaucratic nature of the EU, the different levels of government, the fact that court decisions in the U.K. can be appealed to a higher level of court in Europe, those are all things I don’t think Canadians would ever accept for ourselves.” (Canadian Press)

To which one pundit was moved to point out “no Canadian political leader has any business signing on to a project that would tear apart an existing political union.” (National Post)

Ontario Premier Doug Ford has been accused of being one of the most divisive politicians in Canada, but he has inspired one remarkable feat of togetherness—uniting both Prime Minister Justin Trudeau and Scheer with his planned cuts to French language services in Ontario. “I was deeply disappointed by the decision of the Ontario government to cut services and protections for the francophone minorities in Ontario,” Trudeau said over the weekend. Meanwhile Scheer said he has “expressed my concerns” to Ford about the cuts and said he told Ford “as prime minister in 2019 I would absolutely work with premiers across the country to ensure that French-language services are not affected by any kinds of changes.” The Ontario PC’s economic update cancelled a planned French-language university in Toronto and eliminated the position of French language services commissioner in the province. (CBC, Canadian Press)

Wednesday will bring Finance Minister Bill Morneau’s fall economic update, and with it the government’s promised plan to boost Canada’s competitiveness in the wake of Donald Trump’s tax cuts and deregulation push.

But in the lead-up to the big day, officials continue to stress that the update will not include equivalent tax measures. The Finance department estimates that matching Trump’s corporate tax cut and capital spending write-offs would cost Canada $70 billion over five years. Besides, one official told the Toronto Star, Canadian companies had already enjoyed a tax advantage over the U.S. and that didn’t result in more business investment, just bigger payments to shareholders. (Toronto Star)

Russian cyber attacks will target Canadians during the next federal election as that country seeks to undermine Canadian democracy, the Defence Minister Harjit Sajjan said while in Halifax for a gathering of security experts over the weekend: “We have taken this into account very seriously in our defence policy. We need to further educate our citizens about the impact of fake news. No one wants to be duped by anybody.” (Globe and Mail)

Remember when legalizing weed was going to eradicate the black market for cannabis? It’s only been a month, but the early evidence suggests a large swath of users are sidestepping government-sanctioned weed in favour of what their old dealers have to offer. (Global News)