Despite the scandal, Duffy's old friends are there through thick, thin and tedium 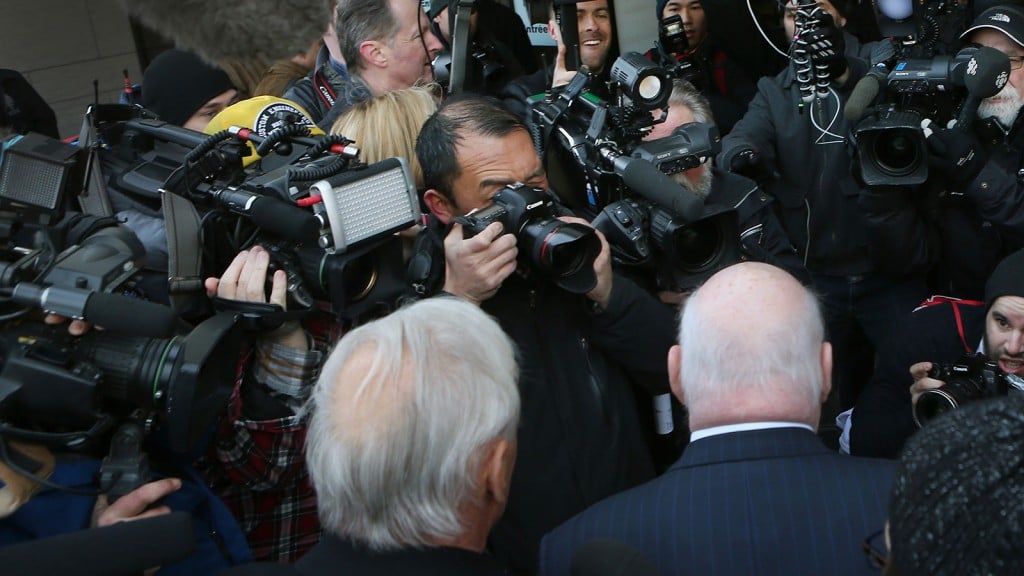 OTTAWA — Eight weeks into the trial of Sen. Mike Duffy and its hours of dry testimony on paperwork and rules, the seats for courtroom guests are rarely full.

But on many days, a few neatly dressed, mostly grey-haired visitors will arrive to sit quietly beside, or directly behind, the parliamentarian and his wife, Heather.

These are Duffy’s true-blue friends — not the political ones that he imagined he had in spades up on Parliament Hill before 2013, but rather the pals from way back, from his time as a broadcaster and man about town.

Marie and Hugh Riopelle are tight enough with the senator that their names appear repeatedly in Duffy’s daily electronic calendars, now part of the trial evidence.

Hugh, a former executive Air Canada, met Duffy through the national press club in the 1970s.

Marie Riopelle comes to sit by her friends, while Hugh is 87 and not as mobile. She says that one cannot underestimate how emotionally devastating the trial has been for the Duffy family.

“That’s what friends do,” Riopelle said of her desire to come to the courtroom. “They would do the same for us.”

One Duffy friend who has repeatedly turned up is retired Hill reporter John Warren, who sometimes hitches a ride to the courthouse with the couple. Duffy and Warren both joined the press gallery in 1971, and live in the same area of Ottawa.

Warren, who worked as a broadcaster with the CBC, isn’t arguing Duffy is innocent or guilty, but feels he’s been “viciously treated” in the public sphere.

“It has to be terribly painful to Mike and Heather Duffy to see this day in and day out and to endure that kind of abuse,” said Warren, who co-wrote a 1993 book on Parliament Hill excesses with now CTV reporter Bob Fife called “Capital Scandal.”

“I just feel a sense of friendly human compassion, that I’m doing the right thing for a fellow that I’ve know and liked for all these years.”

Duffy has pleaded not guilty to 31 charges of fraud, breach of trust and bribery. It bears noting that some of those charges involve another one of his friends, former broadcast manager Gerald Donohue.

Donohue received $65,000 in contracts from Duffy’s office for research and editorial work. The Crown calls it a “reserve fund,” used to pay out other service providers — including another broadcast-era friend, Bill Rodgers.

“He’s well meaning, so I think a lot of the stuff that happened was honest and well meaning,” said Rodgers, following his own testimony at the trial.

Duffy’s circle of friends is also a reminder of his deep roots in Ottawa, another facet of the trial. After becoming a senator, he claimed nearly $90,000 in living expenses for a home he had lived in for several years, while declaring a residence in Prince Edward Island as his primary residence.

Last week, four of Duffy’s Ottawa neighbours watched as one of his former assistants testified, later chatting with the Duffys in an easy, light-hearted way. Heather Duffy’s sister Lynn is perhaps the most frequent visitor.

Earlier in the trial, an elderly man from Surrey, P.E.I., had his son from Ottawa bring him up to the courthouse. All broad smiles and open arm gestures, Duffy’s treated the visitor as if he was coming up for a coffee in his Senate office and not standing outside an airless courtroom.

“I was sitting in on the session this morning and all the rules and regulations, seem to be tied in the middle and loose on both ends,” said Jarad Hanlon, who said he knew some of the same people in P.E.I. as Duffy.

“They could almost do what they wanted, and nobody seemed to know or could advise anybody on anything.”

Of Duffy’s Conservative colleagues, only fellow suspended Sen. Patrick Brazeau, who is also facing charges, has come by the trial of his own accord.

Government whip John Duncan was subpoenaed to testify about a fundraiser Duffy appeared at in B.C. riding. He told reporters he still considers his suspended caucus colleague a friend.

Warren says he hopes the Duffys can eventually find some normalcy, whichever way the verdict goes.

“Time does tend to smooth out a lot of the really painful edges on our experience I think.”