Duffy's trial adjourns until August. Next up: Nigel Wright

Be patient. Stephen Harper's ex-chief of staff will testify on Aug. 11 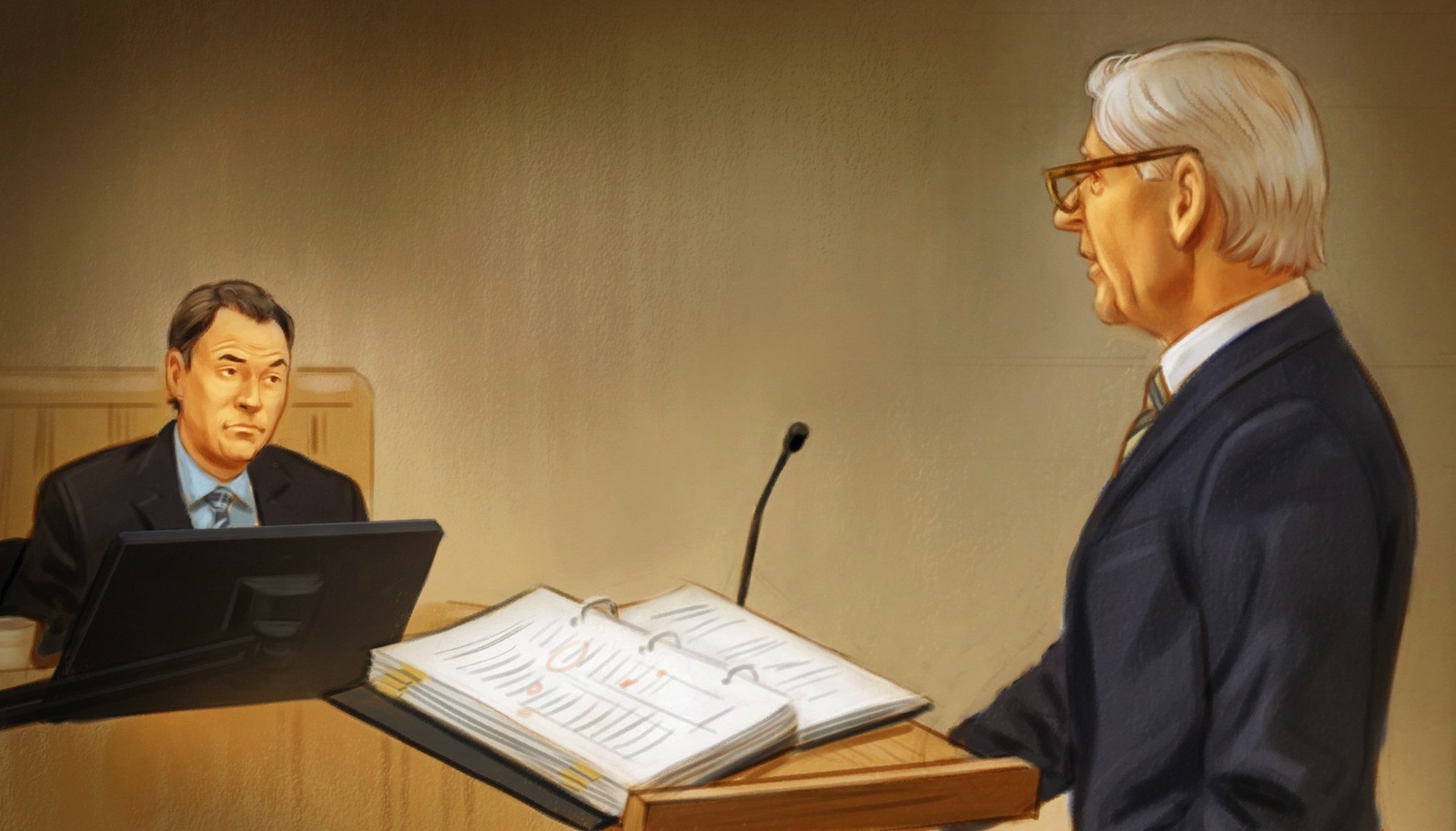 For Donald Bayne, it was like trying to win an argument with Rain Man about how many toothpicks had just spilled across the floor.

Dustin Hoffman was going to win every time.

Grenon had just spent the last two days in the witness box leading court through the ins and outs of Duffy’s financial life, including a $90,000 payment Nigel Wright made to the suspended senator in 2013.

As a brief interlude, let’s just underline here the upshot of the day’s proceedings—that court will not return tomorrow as planned, and that it will reconvene on Aug. 11, when Wright, former chief of staff to Prime Minister Stephen Harper, will arrive in the witness box.

In the flesh. The show we’ve been waiting for.

Even if this is supposed to be the trial of Duffy, charged with 31 counts of fraud, breach of trust and bribery, it is really, all of us hope, a chance to get a peek, through the prism of Wright, into the inner workings of the tightest of closed shops: Stephen Harper’s Prime Minister’s Office.

That’s still a matter for the future, though.

For now, let’s turn to Grenon, whose testimony today completed a three-day voir dire—a trial within a trial—aimed at determining whether Grenon himself can be considered an expert witness for the purposes of this trial, and then how much of his forensic accounting material Justice Charles Vaillancourt will permit as evidence.

Bayne told court straight up he wouldn’t challenge Grenon on the technical aspects of his work, which for the three senators in total took 704.25 hours, at an equivalent value of $95,843 in billable hours (equivalent because Grenon, a civil servant, makes a salary).

Grenon estimated that 60 per cent of these hours were dedicated to Duffy. It was impressive to watch Bayne execute a thumbnail calculation of his own on how many hours that meant he’d spent on his client individually—420, Bayne figured.

Grenon later corrected him: it was 422.

Luckily, Bayne scored the few points he took off Grenon today—and they were not insignificant—on philosophical issues.

First, he tried to portray Grenon as a full-fledged member of the RCMP’s investigative team, rather than as an impartial expert, whose work mandates framed the accounting issues before him as dilemmas in proving Duffy’s guilt.

Grenon argued that his reports could be of as much use to the defence as the Crown.

“We can test that hypothesis,” Bayne countered.

Here we arrived at the second area of difference between Bayne and Grenon.

Noting that one of Grenon’s mandates involved identifying suspicious travel claims filed by Duffy with the Senate, Bayne asked if Grenon knew anything at all about the Senate rules around what constitutes public or parliamentary business. Bayne has, over the course of this trial, produced good moments demonstrating a lack of clarity in those guidelines, and how they appear to allow a good deal of partisan activity.

Grenon conceded that he knew enough about the rules to know he didn’t know them very well.

“You could never give evidence of an opinion about whether or not something was Senate business—that’s for the judge,” Bayne told Grenon.

Bayne went on to poke holes in the idea that Genon’s numbers had much to tell the court at all.

“The punchline of all of this work,” Bayne said a little later, is to add up the totals of Duffy’s various expense claims, generating a grand figure of $493,193.20.

How does that help His Honour determine whether Duffy’s expenses fell within Senate rules, Bayne wanted to know.

Bayne’s point here was that the numbers in and of themselves are not probative—they possess no magical power to communicate the truth of this matter.

Grenon throughout remained a Jedi knight of cool—imperturbable, absolutely confident in his number findings, and yet perfectly at ease with their limitations as well.

“The number doesn’t answer the question of whether it’s Senate business or not,” is how Bayne put it to Grenon.

“That’s for His Honour to decide,” Grenon agreed.

Much of the rest of the day was spent in a competitive shell game exercise, where the prosecution and defence contested the different ways dollars could have flowed in and out of various parking places—Duffy’s various accounts, his wife Heather’s, Duffy buddy Gerald Donohue’s companies—and what meanings lay therein, clean or dirty. They argued over whether Duffy’s spending and use of credit was unsustainable, or whether he merely conducted his financial dealings the same as any other Canadian (Bayne even cited Statistics Canada data to this effect).

The evidence was often thick, and digit-heavy, and news reporters gathered during breaks in the proceedings to puzzle collectively over the numbers and what they meant. News reporters really ought never to do this. That is how bridges collapse.

Now, we were supposed to return to court tomorrow, but Vaillancourt asked for written submissions on the Grenon voir dire, and the Crown had little else to put before him for tomorrow. The prosecution made up for that, in a sense, by announcing Wright’s first day on the stand.

So all we can do is wait. Now it is all about Wright and his arrival on Aug. 11.

What will the Crown make of their witness? What will Bayne do to try and divert that narrative to favour Duffy? It will be a long mid-summer.