Duterte orders S.S. Garbage to set sale for Canadian waters as early as this week

Politics Insider for May 24: Exoneration for Poundmaker, Trump's USMCA optimism and watching for a major B.C. court ruling on Trans Mountain 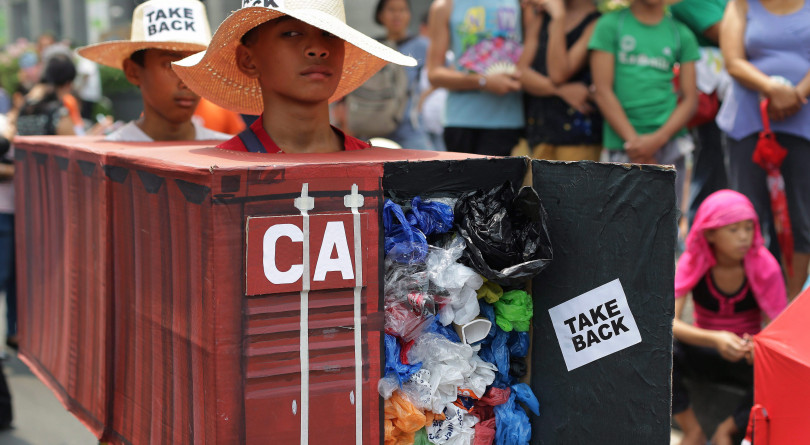 In 2015 Filipino environmental activists wore a mock container filled with garbage to symbolize waste shipped from Canada to the Philippines. (Aaron Favila/CP/AP)

What’s the rush?: Since running for leadership of the Conservative Party, Andrew Scheerhas positioned himself as the deficit slayer Canada needs to put the country’s finances back on track, with his promise to balance the budget in two years. But many couldn’t help but notice Scheer didn’t include a deficit-fighting timeline in his economic policy speech last week. Today Scheer is expected to make it official when he drops his two-year pledge, according to the text of a speech Scheer will deliver in Vancouver which Reuters obtained: “In the last three years, Trudeau has made an even bigger mess of the budget than I thought possible… All of this has made it impossible for anyone to immediately and responsibly balance the budget. Even the most optimistic projections don’t have the Liberals balancing the budget for 20 more years… But if Canadians elect a Conservative government this fall, we will balance the budget in about a quarter of that time.” (Reuters)

Several prominent economists were pleased by the news. “Well, welcome to team #SmallDeficitsArentABigDeal, Mr. Scheer,” tweeted UBC economics professor Kevin Milligan. “Now that we all agree on small deficits, I look forward to a substantive debate on tax policy.” (Twitter)

Has Scheer been taking advice from economists? More likely he’s been listening to pollsters, who have tracked the collapse of support for Ontario Premier Doug Ford and his deficit-slashing cuts. (Toronto Star)

Delayed justice: More than 130 years after Chief Poundmaker was convicted of treason Prime Minister Justin Trudeau exonerated the prominent Saskatchewan chief, describing him as “a peacemaker who never stopped fighting for peace. A leader who, time and time again, sought to prevent further loss of life in the growing conflict in the Prairies.” Poundmaker’s exoneration has been a long time in coming. CBC spoke with the authors of the 1997 book Loyal till Death: Indians and the North-West Rebellion, which for the first time debunked the myth that Poundmaker and other First Nations leaders took part in the Northwest Rebellion of 1885. (Canadian Press, CBC News Q&A)

Lu’s canon: China’s ambassador is back with more warnings for Canada. In a speech Thursday Lu Shaye said Canada-China relations are at a “rock bottom” low not seen since diplomatic relations were established between the two countries decades ago. And while he never mentioned the name Meng Wanzhou, he made it clear relations won’t improve unless the Huawei telecom executive, who was arrested by Canada on a U.S. warrant last year, is freed. “It saddens us that the current China-Canada relations are at a freezing point and face huge difficulties,” said Lu, one of the most volatile envoys to Canada who has penned several op-eds variously describing Canada as a back-stabbing nation of white supremacists for arresting Meng. “The knots shall be untied by those who got them tied.” Also not mentioned by Lu: China’s arbitrary charges of espionage against two Canadian men, the death penalties handed down to two other Canadians for drug trafficking, or Beijing’s ban on Canadian agricultural imports. (Globe and Mail)

Trashy homecoming: We spoke too soon yesterday when we wrote that conflict between the Philippines and Canada had been averted. Philippine President Rodrigo Duterte, who threatened to declare war on Canada over dozens of containers of rotting garbage left there by a failed Canadian company, rejected the Trudeau government’s offer to remove the trash by the end of June. Instead a spokesman for the president said the 69 containers full of waste will be loaded on a ship “this week or a week after” and be sent across the Pacific to be dumped in Canadian waters. (Canadian Press)

Going swimmingly: President Donald Trump thinks Speaker of the House Nancy Pelosi is “crazy” while Pelosi urged his family to stage an “intervention” with the “villainous” Trump for the good of the country—but other than that Trump thinks the NAFTA-replacement deal will sail right through Congress. (Canadian Press)

Bitumen battles I:Later today we’ll find out if a B.C. appeals court will let that province throw yet another wrench in the Trans Mountain pipeline expansion plan. B.C. asked the court to rule if it has the authority to impose a permitting regime on any increase in oil sands bitumen flowing through the province. Whichever way the court rules, expect much fulminating from one side or the other, and the immediate launch of an appeal to the Supreme Court. (Canadian Press)

Bitumen battles II: If the B.C. court does rule in favour of the restrictions, watch for Alberta Premier Jason Kenney‘s head to explode. But on Thursday Kenney was in a conciliatory mood. He and three other provincial party leaders told Trudeau they will accept Bill C-69, the Trudeau government’s proposed legislation to overhaul the environmental assessment process for major transportation and energy projects. Just one catch: the Bill must include all 180 amendments passed by the Senate energy committee, some of which had wording identical to proposals submitted by industry lobbyists. (CBC News)

DUCK! Nothing says Government of Canada like $78 pens, thousands of rubber ducks, branded golf balls and socks. Those were among the promotional items several federal departments and crown corporations disclosed they had purchased over the past two years. Those pens for instance? They were bought by Farm Credit Canada, which lends money to farmers and was the biggest spender when it came to self-promotion among the government organizations that responded to an order paper question put forth by Conservative MP Jamie Schmale. (iPolitics)