The legislation still requires the approval of the Senate, which means Mauril Belanger may not live to see it become law. 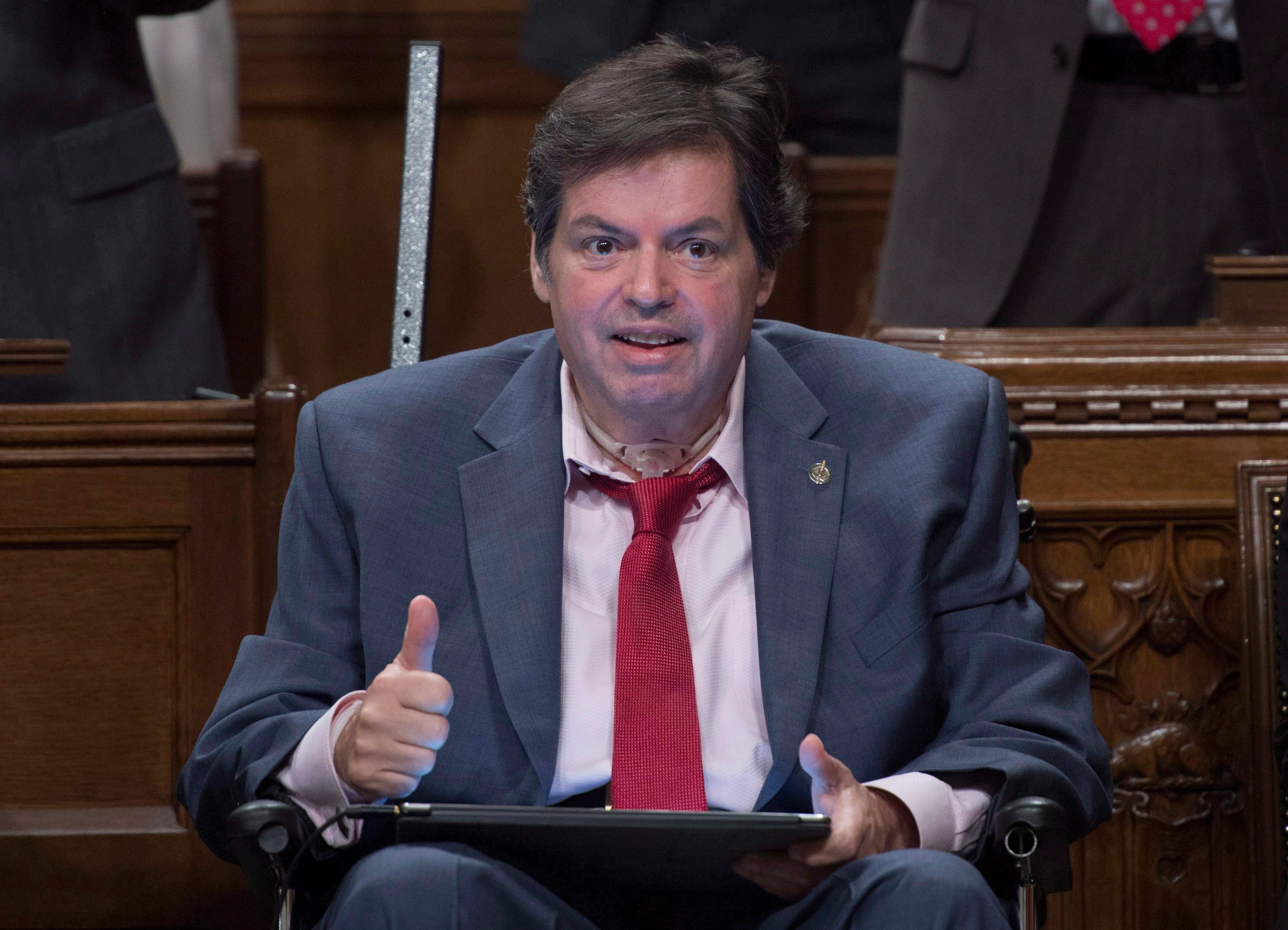 The legislation still requires the approval of the Senate, however, which means Belanger — who was diagnosed last November with Lou Gehrig’s disease — may not live to see it become law.

Bill C-210, which would change the second line of the anthem from “true patriot love, in all thy sons command” to “in all of us command,” passed third and final reading in the Commons by a margin of 225-74.

As the vote began, Liberal MPs stood and applauded Belanger, who sat in the House in his wheelchair. Many flashed him a thumbs-up sign, his trademark gesture, as their votes were registered.

When it was done, the entire House broke into an impromptu rendition of O Canada, as well as a rousing standing ovation.

The anthem change has been a Belanger cause for years, but took on far greater urgency in recent months after it was confirmed he has an incurable, fatal, neurodegenerative condition also known as ALS.

Belanger ran and easily won election for a seventh time in October, but found he was having difficulty speaking during the final weeks of the long campaign. He went public with his condition at the end of November, saying he would drop out of the race to be Speaker of the Commons, a position he had long coveted.

Belanger’s disease is a particularly aggressive version of ALS — a fact made plain by the alarming rate at which his condition appeared to erode.

By January, when he introduced his bill, he had lost his ability to speak, and so needed a voice generator to convert text into computerized speech — the first use of such technology in the Commons.

Related: Mauril Belanger on updating O Canada: ‘We are in 2016!’

In March, he was named honorary Speaker. He shuffled down the corridors of the Centre Block using a walker. He had to be helped into the chair. He presided using a tablet and, at one point, mopped tears from his eyes.

In early May, he used the iPad again to open second reading of his bill. He seemed noticeably thinner. His collar was loose to accommodate a tube inserted in his throat to help him breathe and keep his lungs clear of fluid.

The Conservatives opposed the bill on the grounds that important pieces of the national heritage shouldn’t be trifled with. If they are changed, it should be with broad consent of Canadians, they argued.

However, a number of Tory MPs — Gerry Ritz, Peter Kent, Michelle Rempel and Candice Bergen, among others — voted to support the legislation.

Belanger has said the change would actually return the anthem closer to the original “thou dost in us command” — wording that was changed to “all thy sons” in 1913, presumably to honour men in the armed forces at the approach of the First World War.

Since then, Belanger said, women have won the right to vote, to run for office and to die in combat as members of the military and the anthem should not slight half the population.

The Conservatives tried to resurrect “thou dost in us command” in the 2010 speech from the throne, only to face strong public opposition. They dropped the idea.