Earl Cowan, the fly in the Conservatives' rally ointment

The Tories had refined their recipe for a smooth rally down to a science. But maybe they'll now need to vet even their most ardent defenders. 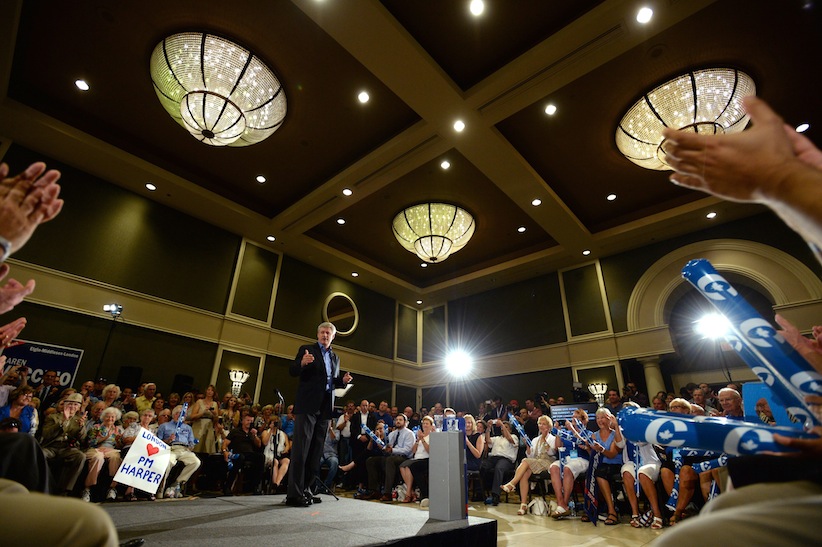 Conservative leader Stephen Harper delivers a speech at a rally in London, Ontario on Wednesday, August 19, 2015. THE CANADIAN PRESS/Sean Kilpatrick

The Conservatives seemed to have perfected the recipe for a perfectly brewed rally. The party’s prescreening process directs possible attendants online to submit their identifying information—an application of sorts, with no guarantee of acceptance. A team of campaign organizers checks the names, and only those approved as supporters will get event bracelets taped around their wrists. Should a foreign party member slip through the doors, officials are quick to decontaminate. At a rally in 2011, a teenager admitted to the event was hastily removed when officials found a Facebook photo of her wearing a T-shirt from the Liberal campaign.

But based on a recent embarrassment, the Conservatives will have to do more than filter out their foes. At a rally in Toronto Tuesday morning, a now-legendary Conservative supporter gave a piece of his mind to journalists for their coverage of the Duffy trial, which, in his opinion, is a non-issue. “You’re a lying piece of s–t,” were a few of his words. He told the growing scrum that Harper knew nothing of Duffy’s trial: “Harper doesn’t read income tax forms, you idiot.” Before security could remove him, he accused a CBC reporter of creating “fantasy issues” and cheating on her own taxes.

Social media comments suggest the grey-haired man to be Earl Cowan, a Conservative supporter with a history of incendiary comments similar to the ones at the rally. A Toronto Star report also cited unnamed sources identifying the heckler as Earl Cowan. A Facebook profile under this name includes a post from 2013 saying “our Senator Duffy has not done much wrong,” and, “when the media learns the difference between trivia and real issues, our governors will not have to waste time making excuses.”

A man identified as Earl Cowan voiced extreme opinions at a Toronto mayoral debate in 2014, when he told Olivia Chow to “go back to China.” After the Supreme Court struck down prostitution laws, a post on Cowan’s Facebook page stated, “I suppose career councilors in schools will now offer this as a career option and travel agents will update the attractions to tourists.” He also suggested putting “all Toronto politicians and media people into rehab somewhere in Greenland and let Rob Ford run the city.”

Cowan appears to be somewhat elusive, with no phone number listed in the Toronto directory and no friends or photos on Facebook. After the Chow confrontation, he handed out a business card reading nothing but “Earl Cowan, Farmer.”

Conservative rallies might be homogenous, but that does not guarantee they’ll be smooth. The Conservative Party did not respond to requests for comments on their vetting process, but it seems campaign organizers will have to further vet each attendee, including their most passionate followers. Reference checks, media training and a personal interview should do.