Ed Broadbent: Influence, ideas and an unfulfilled quest for power

On Nov. 15, Maclean’s celebrated the best of Ottawa with the ninth edition of our Parliamentarians of the Year awards. Former NDP leader Ed Broadbent won the ceremony’s lifetime achievement award. View the full list of award winners.

The Canadian federal election of 1968 is remembered for Trudeaumania, the mass response, especially among young voters, to Pierre Trudeau’s insouciant style as leader of the Liberal party. But Ed Broadbent, running for the first time as a New Democrat that year, brought his own ’60s feel to the race, if only at the local level.

Broadbent was born and raised in Oshawa, the auto industry town just east of Toronto. By 1968, though, he was a young, left-leaning political science professor at the city’s York University. Heading home to stand for office, he brought students with him to campaign on his behalf, alongside the auto workers he had grown up with. “It was absolutely terrific to see the interplay,” he recalls. “You had these very young, hip students coming into Oshawa with these very traditional working-class families that I admire and was very close to.”

He won by the narrowest of margins, and went on to sit in the House until 1990, the last 15 years as NDP leader. He briefly reprised his career as a parliamentarian as MP for Ottawa Centre from 2004-06. Outside electoral politics, he headed the International Centre for Human Rights and Democratic Development from 1990 to 1996, and lent his name to the Broadbent Institute, a social democratic research and training organization, whose board he chairs.

For his long service in the House, and his energetic contribution beyond the chamber, Maclean’s honoured him with a lifetime achievement this week at the annual Maclean’s Parliamentarians of the Year awards. In a wide-ranging interview, he looked back on a life that began, as he remembers, with an idyllic childhood.

Born in 1936, Broadbent’s first memories are not of the Depression, but of the Second World War years and the postwar boom that followed. His auto-working family wasn’t rich, or politically active, but Oshawa was prosperous and everything seemed possible. At the University of Toronto, he weighed liberalism, conservatism and social democratic ideals, and settled firmly on the latter.

Although he went on to study at the London School of Economics—an intellectual hub of the left—he was influenced by conservative thinkers, too. He contends that a willingness to learn from opposing schools of thought is undervalued these days. Still, Broadbent was a staunch social democrat. After entering the House as an MP in 1968, he won the NDP leadership in 1975, narrowly defeating Rosemary Brown, who was then sitting in British Columbia’s provincial legislature—the first black woman elected at the provincial level in Canada. Broadbent speculates that she might well have beaten him, had he not been nominated by NDP icon Tommy Douglas. Brown, who died in 2003, became a friend, influencing Broadbent’s thinking on issues including child care and equal pay. “I learned to see issues from a feminist perspective,” he says. “Rosemary got me beyond the level of abstraction on feminist issues.” 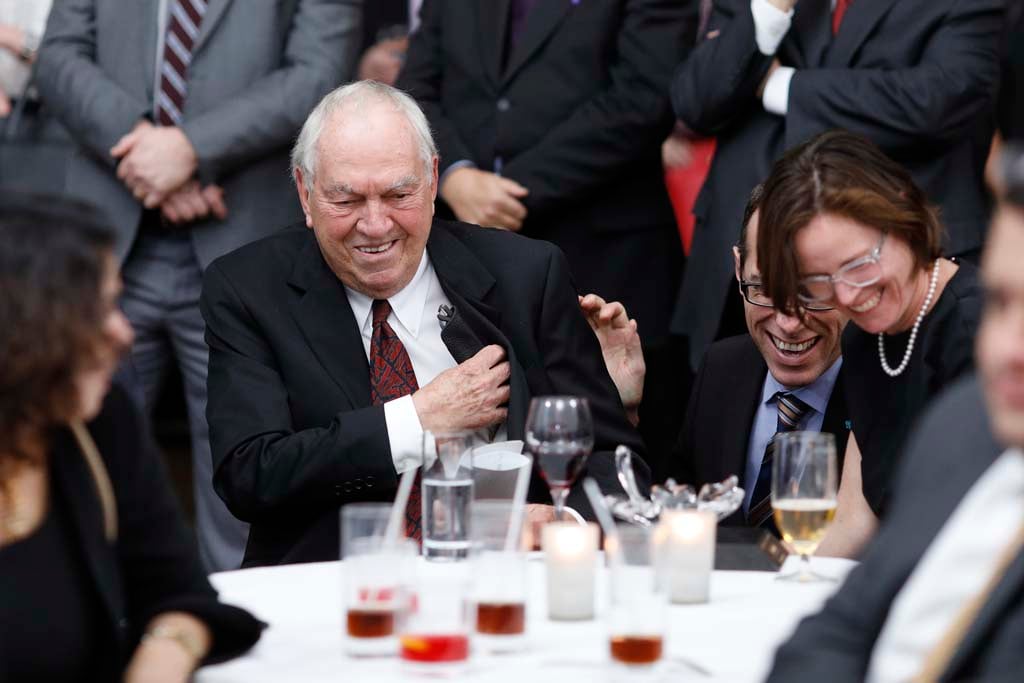 Lifetime achievement award winner Ed Broadbent laughs during the Parliamentarian of the Year Awards at the Fairmont Chateau Laurier in Ottawa November 15, 2016. Photograph by Blair Gable

In these days of the rise of Donald Trump and the shock of Brexit, Broadbent is preoccupied with the “grotesque inequalities” he sees at the root of right-wing populist successes. “When there’s a conflict between mere economic efficiency and social justice, [political leaders] have got to start coming down on the side of social justice instead of economic efficiency,” he says.

Like all other NDP leaders to date, Broadbent never won the chance to put his ideas in practice as prime minister. But he argues his party has succeeded in pushing others to the left. Indeed, he says Pierre Trudeau once told him his most satisfying stretch as prime minister was 1972-74, when he relied on NDP support to sustain his minority government.

What would it take for Broadbent’s party to achieve the ultimate goal of an election win that eluded him? Something similar to the intoxicating mix of supporters he brought together in Oshawa in 1968—union stalwarts and urban activists—remains a model for the coalition the party needs to assemble in larger numbers if it’s ever going to happen.

Until then, New Democrats can at least take solace from having put as distinguished a parliamentarian as Broadbent, our 2016 lifetime achievement honoree, on the national stage.