Election campaigns are all about positioning. Those who see Stephen Harper cleaving to the hard right should look again. 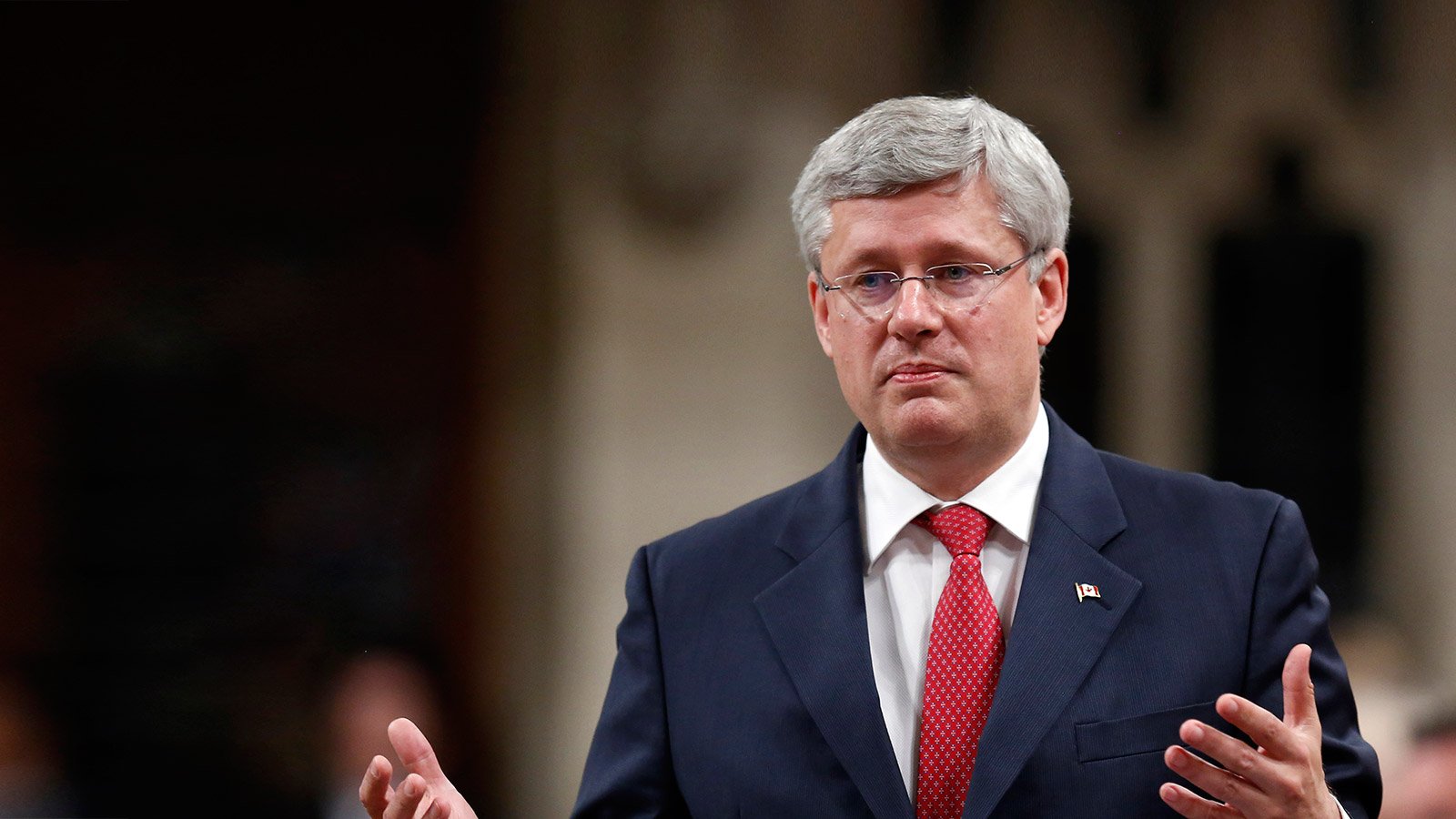 In 2010, journalist Marci McDonald published The Armageddon Factor, a book about the reign of Prime Minister Stephen Harper. Its thesis was as fraught as the title suggests: Harper was leading the country toward a virtual theocracy, in which progressive social measures like abortion and gay rights would be reversed so as to please his vengeful God.

According to McDonald, Harper is particularly dangerous because he “sidestepped the minefield of the culture wars” that beguiled his predecessor Stockwell Day, whose public belief in creationism earned him ridicule and electoral defeat. Instead, McDonald argues that Harper came to power by selling himself as a porridge-grey economic conservative, if only to make the country properly Christian for the coming apocalypse. This “born-again Prime Minister” betrayed his evangelical roots only when he declared “God bless Canada” at the end of his victory speech in 2006. Cue ominous music.

McDonald’s take, long familiar amongst Harper’s foes, hasn’t come to pass. Far from being a Trojan Horse for the Bible-thumping set, Harper has virtually ignored the social conservative voices within his own party. He has avoided any action, or even debate, on abortion and has quietly solidified the gains of the country’s gay rights movement simply by not challenging any of its many victories over the last decade. In fact, Harper’s decisions during his eight years in power suggest he is an entirely different Trojan Horse—one whose gallop looks liberal.

Consider the Conservative government’s contribution to the multinational fight against Islamic State. It took weeks for the Prime Minister to arrive at a decision to send Canadians overseas to fight in Iraq—Canadian military expert and former Liberal candidate Jocelyn Coulon chided the government for its “strange indecision”—and even then our commitment was a relatively modest one of a handful of aircraft, with support staff and military advisers. Though this was depicted as senseless warmongering by the opposition, it drew praise from Liberal stalwarts Bob Rae, Lloyd Axworthy and Ujjal Dosanjh. (Not that Canada could have given much more. The Conservative government’s familiar “support the troops” rhetoric notwithstanding, military spending today as a percentage of GDP is lower, according to NATO figures, than it was under the previous Liberal governments of Jean Chrétien and Paul Martin.)

The Prime Minister’s recent United Nations speech, meanwhile, was positively dovish in its tone. In contrast to Barack Obama’s fiery condemnation of Islamist terrorism the day before, Harper vaunted Canada’s role in improving maternal health around the world, and he spoke of the “virtuous circle” of “freedom, prosperity and peace.”

The rise of social conservatism, so feared by many of Harper’s opponents, has never materialized. On the issue of abortion, Harper opposed a private member’s bill from a member of his own party that would have reopened the debate over when a fetus becomes a human being. Nearly a decade of Conservative government hasn’t altered this fact: Canada remains one of the few countries in the world where there are no legal restrictions on abortions whatsoever. While he has yet to show up to a Pride parade, Harper hasn’t attempted to curtail the march of progress when it comes to gay rights. It’s quite a contrast to his supposed allies within America’s Christian right, who continue to harp on both issues.

On the question of working poor, the Harper government’s Working Income Tax Benefit, which supplements the wages of lower-income individuals, was heralded as “a pathway out of poverty” by the left-leaning Citizens for Public Justice. And Harper has not been afraid to cross the business lobby, having overseen the neutering of the Temporary Foreign Worker Program, depriving many industries of cheap (and often exploitative) labour.

Harper’s few stabs at rock-ribbed conservatism—the government’s tough-on-crime legislation, its attempts to curtail refugee health benefits—have been so clumsy that the courts shot many of them down. His government’s attempts to amend prostitution laws stand a good chance of suffering the same fate. Unintentionally or not, this has allowed the government to maintain a liberal status quo while railing against unelected judges—a bit of red meat for Harper’s hungry base.

Finally, there is the Senate. Previous incarnations of Harper despised the institution, yet the Prime Minister has done little of effect to curtail its size or political influence. Harper has instead embraced Senate patronage with great gusto, appointing 59 senators since 2006. In this, he has been almost as effective as Pierre Trudeau.

The next federal election is a year away, yet the unofficial campaign has already begun. Labels and positioning will become increasingly important in the coming months. Both the NDP and the Liberals have staked ideological territory on the left, believing that Canadians generally tilt to that side of the political spectrum. Yet this strategy relies on having a Conservative Prime Minister who is as unflinchingly right-wing as Marci McDonald’s caricature of yore. Clearly, this isn’t the case.