So much of our future depends on planes, trains and automobiles. It's time to put politics aside and fix things. 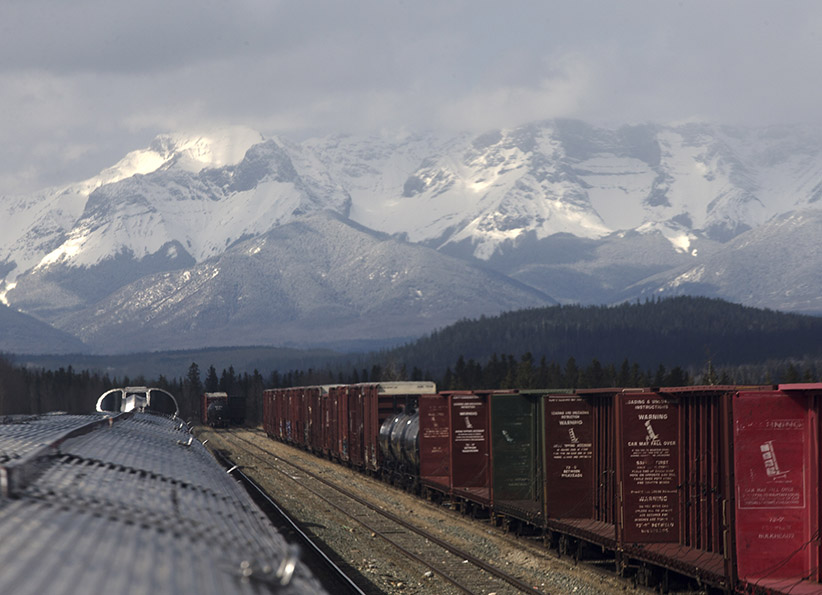 Scenery along the track aboard the Canadian, a Via Rail train between Edmonton and Jasper Alberta. (Bernard Weil/Toronto Star/Getty)

You can’t trade if you can’t move—there, we just saved you the time required to read the new 500-page, two-volume report on Canada’s sclerotic transportation system. For an even greater boost to national productivity, the federal government should take immediate action on the report’s many vital recommendations. They would vastly improve how our goods are shipped, hauled, flown and driven to market—and our future prosperity depends on it.

Unfortunately, accepting good advice is not always a simple matter in Ottawa. The report “Pathways: Connecting Canada’s Transportation System to the World” is authored by controversial, floor-crossing former cabinet minister David Emerson, who abandoned the Paul Martin Liberals after the 2006 election to become the Conservatives’ minister of international trade. (Emerson declined to run in 2008.) Originally commissioned by the Harper government, the report was accepted by Prime Minister Justin Trudeau’s government last week with suspiciously little fanfare. Political optics aside, however, ignoring this report would be a grave mistake.

Canada has made considerable progress modernizing and streamlining its transportation networks since the early 1980s, when much of the country’s air, road, rail and water infrastructure was under direct government control (mainly due to protectionist fears of the private sector and foreign investment). The realities of free trade have slowly unclenched the public sector’s tight grasp, but there’s still much to do. Out of 140 countries, the World Economic Forum ranks the overall quality of Canadian roads at 26, our ports at 21 and our airports at 16. For a country encompassing so much distance and so dependent on trade, it’s time to steal a march on our competitors.

“The world is moving to an open market for air services,” the report observes. To provide an immediate infusion of new capital and competition into the airline industry, Emerson recommends foreign investors be allowed to own 49 per cent of Canadian passenger airlines, up from the current 25 per cent. If that sounds familiar, it’s because a similar blue-ribbon panel said the same thing in 2008. At some point, the federal government will need to accept this advice. Emerson also recommends airports, along with seaports, be allowed to pursue private-sector share-capital investment to fund much-needed improvements, as is the case with many successful competitors around the world.

Emerson further highlights the most frustrating aspects of passenger air travel—his panel heard “near-universal condemnation of the existing state of security screening services at Canadian airports.” He suggests a move to “risk-based” screening methods by abandoning blanket coverage and focusing instead on obvious security threats and making greater use of technology. All this should shorten lineups and improve the travel experience. It may also be time to rethink Canada’s mysterious air marshals program, which places armed agents on Canadian flights. Based on outcomes, it appears wholly unnecessary and extremely costly. Even the security-obsessed United States is rethinking its air marshals.

By rail, the call is for “a more commercially grounded framework,” particularly within the politically sensitive grain business. Canada’s railways currently face a bizarre Maximum Revenue Entitlement—a cap on how much they can earn hauling grain. Not surprisingly, this leads to frequent conflicts with farmers. Emerson calls for a seven-year phase-out of this profit-limiting device, and the option for railways to offer “express” haulage for farmers willing to pay a premium for faster service. By road, Emerson highlights the promise of autonomous, self-driving cars and trucks and recommends the development of joint Canada-U.S. regulations to ensure a seamless and harmonized North American road system of the future. This too will require investment, co-ordination and foresight.

At first blush, Prime Minister Justin Trudeau’s election promise of $60 billion in new infrastructure spending appears to align with the overall thrust of Emerson’s demands. In truth, however, the amount allocated by the Liberals to trade-enhancing infrastructure is the same as was promised by Stephen Harper’s regime. And Trudeau has directed Amarjeet Sohi, his minister of infrastructure and communities, to abandon previous efforts to attract new private-sector investment through partnership efforts. The billions in additional Liberal infrastructure money is to be spent on public transit, green energy and social projects such as affordable housing—none of which will help speed Canadian goods to market.

With the federal deficit on the rise for reasons unrelated to necessary investments in improved trade logistics, the need to attract other forms of financing become even more acute. Thus Emerson’s intense focus on private-sector funding through share-capital arrangements, user-pay discipline and legislative changes to broaden participation by pension funds and other institutional investors. The money has to come from somewhere. If Canada’s 36 million people want to do business with the other seven billion inhabitants on Earth, we need the means to get there and back as quickly and efficiently as possible.