Why Canada should celebrate the Trans-Pacific Partnership

The editorial: Whatever the political ramifications, here's why the TPP deal is a win for Canadians 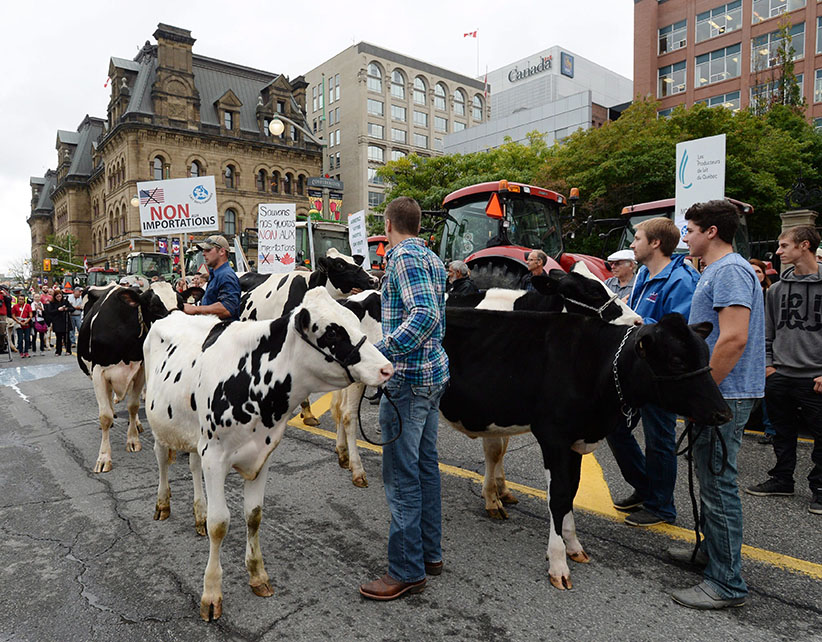 Regardless of our vast expanse, seemingly limitless resources and envy-inducing standard of living, Canada is not a large country, economically. We are a “small, open economy” in textbook parlance, crucially dependent on foreign markets to buy what we have to sell, and to provide Canadian consumers with a wider and cheaper variety of goods from abroad. And, as with most things, the best sort of trade is free: free from tariffs, restrictions and other government-imposed barriers. So whatever the political ramifications, this week’s Trans-Pacific Partnership (TPP) deal should be properly celebrated by all Canadians for putting our country at the forefront of international trade and helping to ensure our future prosperity.

The TTP involves a dozen Pacific Rim countries, including Canada, the United States, Mexico, Chile, Singapore, Australia, Japan and Malaysia. It will provide Canadians with largely tariff-free access to a market of 800 million consumers accounting for nearly $30 trillion in economic activity, plus deliver lower prices at home. Knitting together this community of fast-growing trading partners will also create a bulwark against the growing economic and military dominance of China. What is crucial, we will become the only G-7 country to have free-trade access to the U.S., South America, Europe and Asia-Pacific; the TPP thus offers Canada a unique position as pivot point for worldwide trade. “This is a big deal, and a great deal,” Conservative Leader Stephen Harper said in making the announcement. It is.

But with an election just around the corner, the TPP must be viewed from a political, as well as an economic, perspective. Once again, the results are significant and far-reaching.

So how should voters judge this deal, in light of the rest of Harper’s legacy?

The Conservative government has been widely chastized for many underhanded, divisive and regrettable political manoeuvres. Here we include such things as omnibus legislation, the current niqab debate, the worrisome erosion in the quality of the census, and foolish “tough on crime” policies in the face of falling crime rates. Criticism on these grounds is entirely deserved. And yet, when it comes to many of the biggest and most important aspects of running a country, Harper has demonstrated a satisfying ability to get things right. We refer here to the direction of taxes and government spending, the fact that Quebec nationalism is in abeyance, the relative peace in federal-provincial health-care funding, as well as Canada’s more purposeful and coherent presence on the world stage. But Harper’s commitment to trade, covering dozens of bilateral deals, last year’s European pact and, now, the TPP, stands as his signature achievement.

That even the obstreperous Dairy Farmers of Canada—whose members had the most to lose from open borders—have called the deal “fair” hints at Harper’s commitment to square the TPP circle. Of course, their acquiescence has been bought with $4.3 billion set aside to compensate farmers for loss of income and/or quota value over the next 15 years. While it would have been preferable to eliminate supply management in its entirety, and it’s lamentable that 12,000 dairy farmers could have held the country hostage on such an important matter, by 2030, it seems reasonable to assume we’ll finally be able to take the dairy, egg and poultry sectors off welfare support. A similar observation holds for the auto-parts sector, which has been promised an additional $1 billion over 10 years to win their silence. The price of achieving this deal is not unreasonable.

For Harper’s competitors, the deal presents a problem. NDP Leader Tom Mulcair’s claim that his party “will not consider itself bound to any [TPP] agreement” should be deeply troubling for all but the most die-hard isolationists within his ranks. Canada simply cannot afford to be left outside a deal that includes its biggest trading partners and the crucial opportunities of the Asia-Pacific region. Mulcair’s stance seems a throwback to the NDP’s bad old days of economic illiteracy and political irrelevancy. And Liberal Leader Justin Trudeau’s focus on the alleged “secrecy” of the deal can be dismissed as so much political bluster. Trade deals are never successfully negotiated in public. (Remember the disastrous World Trade Organization meetings in Seattle in 1999?)

Given the opportunities at stake—and the fact opponents such as dairy farmers and the auto sector have already accepted it—it’s virtually impossible to imagine a federal government turning down this deal, regardless of who wins the coming election. Canada is, and must remain, a trading nation. And so if Harper happens to be defeated on Oct.19, for whatever reason, the TPP may go down as the best and least selfish thing he ever did for his country.