In the news today: Dean Del Mastro is sentenced in Peterborough 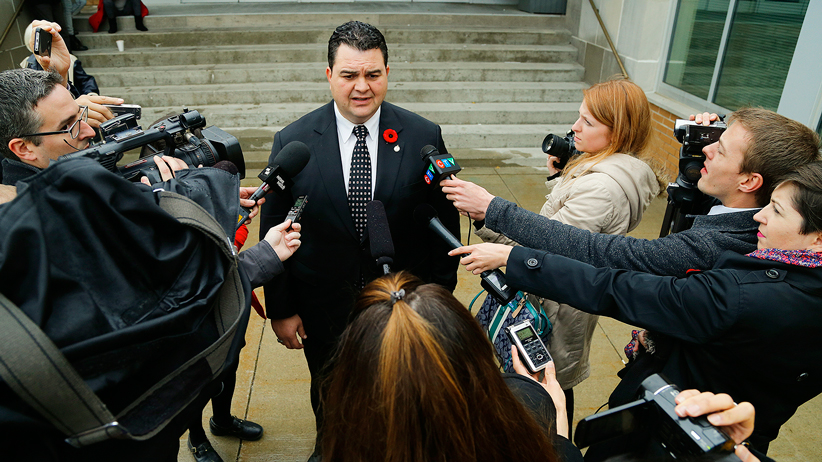 Disgraced former Conservative politician Dean Del Mastro finds out today in a Peterborough, Ont., court if he will have to go to jail. Del Mastro was found guilty last fall of violating the Canada Elections Act during the 2008 federal election. He faces up to one year in jail and a $2,000 fine for each of the three offences.

It’s been said the wheels of justice turn slowly, and a new look at Canada’s creaky access-to-information system appears to bear that out. According to data collected as part of a Liberal question in the House of Commons, Justice Canada has the longest-running active access-to-information request — six years.

The British Columbia Civil Liberties Association is applauding Vancouver city council for regulating medical marijuana dispensaries but is warning the new bylaws are too restrictive. Policy director Micheal Vonn says patients will see their right to edible pot — granted in a recent Supreme Court of Canada decision — disappear with the city’s ban on the sale of brownies and cookies from storefronts.

Saskatchewan Premier Brad Wall says the province will formally apologize for decades-old policies that saw aboriginal adoptees taken from their homes and placed with non-native families. But Wall says Saskatchewan will not offer cash to the victims of the so-called ’60s Scoop because the province feels it is not a “compensatory issue.”

Representatives from three levels of government gather today in Shoal Lake 40 for an event marking the quest to build an all-weather road, dubbed Freedom Road. The First Nation straddles the Ontario-Manitoba boundary and has been under a boil-water advisory for 17 years. Manitoba, Ontario and the City of Winnipeg are urging the federal government to chip in $10 million needed to connect Shoal Lake 40 First Nation with the outside world.

Prime Minister Stephen Harper is in Quebec City to make an unspecified announcement.

A verdict is expected in St. John’s, N.L., for Nelson Hart. He was charged with making threats and mischief after an incident at Her Majesty’s Penitentiary as he awaited an appeal of his murder conviction in the deaths of his twin daughters.

The Canadian Museum of Immigration at Pier 21 in Halifax unveils a permanent Canadian Immigration Story exhibition.