EKOS/CBC: Man, those voters are a volatile bunch, aren't they?

CPC 34.8/LIBS 32.6/NDP 14.3/BQ 9.0/GRN 9.3
Well, the latest CBC/EKOS numbers are out, and – as foreshadowed by last week’s results, it would seem to be bad news for the Liberals, who have fallen behind the Conservatives for the first time in months.

Here’s what EKOS pollologist-in-chief Frank Graves has to say: 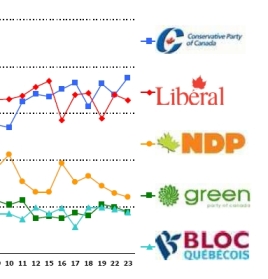 The Conservative Party has edged ahead of the Liberal Party after months of lagging behind, according to the latest EKOS poll, released exclusively to cbc.ca. The Liberal Party and its leader, Michael Ignatieff, appear to have paid a price for threatening to take the country to the polls this summer. EKOS’ daily tracking shows that they nose-dived after making the threat last week.

Although the Liberals may have recovered some of that ground once they made a deal with Prime Minister Harper to avoid an election after all, it has nonetheless been a bad week for them. At the same time, the Conservatives are benefitting from rising optimism about the economy among some Canadians – those affected more directly by the economic news or stock and real estate markets than by the labour market, which continues to deteriorate.

The Liberals may well recover from this short-term political setback,” said EKOS President Frank Graves. “At least that has been the pattern of the last six months when purely political events have rocked Canadians’ voting intentions.” “More hopeful for the Conservatives and worrisome for the Liberals is the rising optimism on the economy, which is clearly behind some of the movement back to the Conservatives from the Liberals in recent weeks. This might have the makings of a more enduring trend.” The principal movement in this most recent poll took place in Ontario. For several months the Liberals have enjoyed an advantage in the province, often reaching into the double-digits. Now, they are neck-and-neck with the Conservatives in Canada’s largest province.

Honestly, y’all, I just don’t know what to make of these numbers — I mean, yes, it does appear to back up the contention that Canadians were, to put it mildly, some ticked by Ignatieff’s brief but lively foray into electoral brinksmanship – but if that’s the case, why the extreme slumpage at the end of the week, when the danger had passed, and the Liberals — having backed down two days prior — were voting with the government to pass the last bits of the budget bill while counting down the minutes til the House would adjourn for the summer? As for the Conservatives, with the exception of that weird one-day plunge last Thursday, the determinedly upwards trendline has to be encouraging, but if – as Graves suggests – it’s mostly to do with the economy, doesn’t that mean any such gains could be wiped out in the future by a weeks’ worth of less-than-cheery headlines? And what’s behind the apparent flatlining by the NDP?

Over to you, commenters. Thoughts, theories, wild speculation?