How the province has dominated this federal election campaign, in ways both historic and unexpected 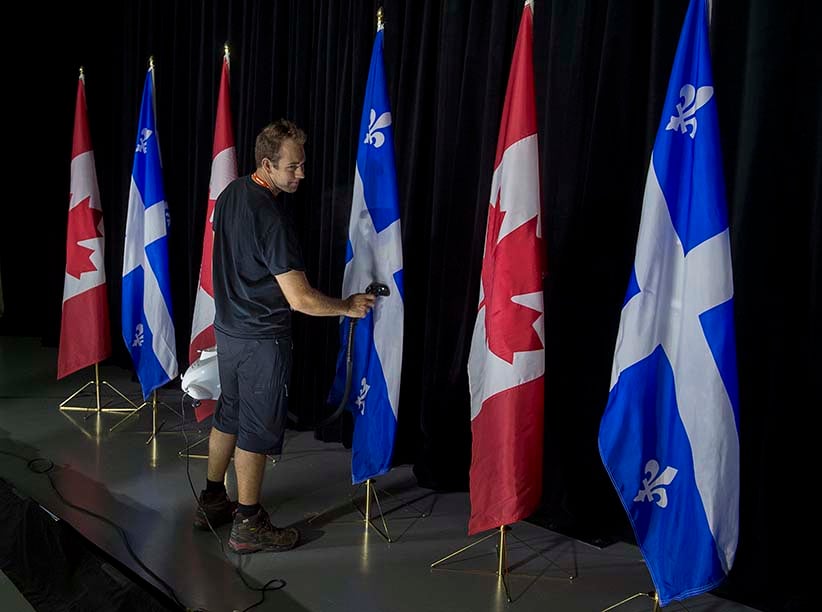 “You have to understand,” the federal strategist told me in the spring of 2013, “that this whole thing is a massive Quebec play.” Campaign 2015’s fundamental story is the re-emergence of the province’s issues and tendencies at the centre of Canadian politics. These primordial elements of our history have unleashed an epic rise-and-fall drama with three prohibitive front-runners in eight months, the comeback of a seemingly doomed national party and, just perhaps, a vintage Diefenbaker-’57-style, star-is-born moment for Justin Trudeau. Oh yeah, and a near-crisis in the country’s conception of itself.

For almost a quarter of a century since the eruption of the sovereignist Bloc Québécois, Quebec has held aloof from federal politics. This is most unusual. Since the country’s inception, the most reliable means of winning a national election had been to position leader and party as the bridge between Quebec’s cohesive francophone majority and enough of the country’s other constituencies to put together a national government. Mastering this play, the “Quebec bridge,” delivered long stays in office for both Conservatives and Liberals: under Macdonald, Laurier, King and St. Laurent, Pearson and Trudeau and, a little more briefly, Mulroney. But with Quebec, in the wake of the failure of the Meech Lake constitutional accord, withdrawing at its end, the bridge was out. A strange era in Ottawa resulted, where majority governments could be won with popular vote percentages in the 30s. Two generations of federal politics, essentially without Quebec.

That is, until 2011, when NDP leader Jack Layton’s astonishing late-campaign surge in La Belle Province engulfed the Bloc Québécois. The stage was set for a great campaign this year, in which Quebec’s return to the mainstream of national politics would come via the NDP. The shining bridge would soar over the linguistic chasm once again, with New Democrats first over the rainbow, likely dragging a few shrewd Liberals along with them into the sunlit uplands of a new two-party order.

It isn’t turning out that way. And the pivot on which the whole thing has swung was the opening exchange of the first French-language debate.
The roots of the moment run deep. For decades now, francophone Quebec’s transition from a pastoral, Catholic and anglo-dominated people to modernity—from the Abitibi strike to Expo ’67 in just 20 years—had been celebrated by Canada’s political class as a turn toward enlightenment. Quebec’s transformation also altered the province’s role in Confederation, with progressive Quebecers applying French power in Ottawa to effect nationwide transformations, such as the completion of the welfare state and the Charter of Rights and Freedoms.

At the same time, however, these changes, especially the growth and cosmopolitanism of urban Quebec, brought out other tendencies. One of these was a natural reaction of some to wonder whether the province they had won in becoming maîtres chez nous was still really theirs. Had it instead become the property of those unwilling to honour Quebec’s unique character and history?

This anxiety lies behind phrases such as “old-stock Quebecers,” “money and the ethnic vote,” and “pures laines.” These statements have often seemed at odds with English Canada’s growing civil religion of tolerance, multiculturalism and pluralistic inclusion, and discordant to the refined, cosmopolitan sensibilities of the country’s political class. It’s been tempting for some to think of these anxieties as purely Quebec phenomena.

And so it might have seemed when that very debate erupted on Sept. 24 at the Radio-Canada studio. Bloc leader Gilles Duceppe came ready to use as a local scalpel a proposed ban on wearing the traditional Muslim niqab at citizenship ceremonies. With this sharp blade, he sliced into NDP Leader Tom Mulcair’s Quebec-support bubble. The intention: Reverse nationalist Quebecers’ 2011 migration from the Bloc to the NDP.

Conservative Leader Stephen Harper came ready, too, but with national objectives in mind. Since his campaign had nearly foundered in August, he had retooled it into a brutally hard-edged, unabashedly politically incorrect offering: a Canada that would: not accept large numbers of Syrian refugees, not allow the niqab to be worn in citizenship ceremonies, strip certain convicts of citizenship and, as he said two weeks later, consider banning civil servants from wearing this traditional garb. And that was just what the PM said out loud; the refrain oozed out from his candidates at the riding level in even more lurid colours: “fight[ing] jihadi terrorists” in the Lower Mainland of B.C., and denouncing “the agenda . . . to try to move as many Muslims into some of these European countries to change these countries” in suburban Toronto.

Harper understood and embraced the fact that anxieties about a changing Canada and a changing world were not confined to Quebec, and that a market for this kind of politics exists through large swaths of English Canada. Harper took a classic “Quebec file” scalpel and fashioned it into a base-rallying, elite-denying broadaxe to be wielded across the country.

Alongside Harper taking these Quebec concerns to the national stage has been a parallel dynamic. Mulcair has striven to take Quebec’s support of the NDP and sell it to English Canada’s change-oriented voters as the reason to get behind him. For Trudeau, the sequence has been the opposite: First, get past the NDP outside of Quebec, then close the campaign by presenting to the province a national change constituency united behind the Liberals.

In either sequence, and even with Harper’s opposite-directed policy thrust, the goal of all three parties has been the same: Complete the re-entry begun in 2011, and walk across the restored Quebec bridge into power.

We can’t know who will win this grand national showdown. But something significant is clearly on the line. Since the 1970s, political elites have increasingly assumed that Canada as a whole was moving steadily toward some kind of multicultural, post-ethnic, urban-tinged light. This is now being challenged directly by a sitting Prime Minister leading a national party.

It’s a debate that divides. Whatever the result turns out to be, the country will be at odds with itself from Campaign 2015, with gaps defined by urban versus rural, educated versus less-so, connected versus insular, old versus young, and so on.

But the great change afoot is that this gap will cut across the linguistic divide, not run along it. Fifty years ago, Quebecers may have interpreted this kind of politics as an attack on la nation. Not so today.

Two solitudes will remain on Oct. 20, but they will be solitudes of outlook, not of blood and territory. To paraphrase our longest-serving Prime Minister, we’re at last getting past our overabundant geography, and starting to acquire some history—for good or for ill.

John Duffy is a political strategist in Toronto and author of Fights of Our Lives: Elections, Leadership and the Making of Canada.