Where each of the parties stand on Canada's place in a fraught global landscape—and what, among so many competing issues, are their priorities 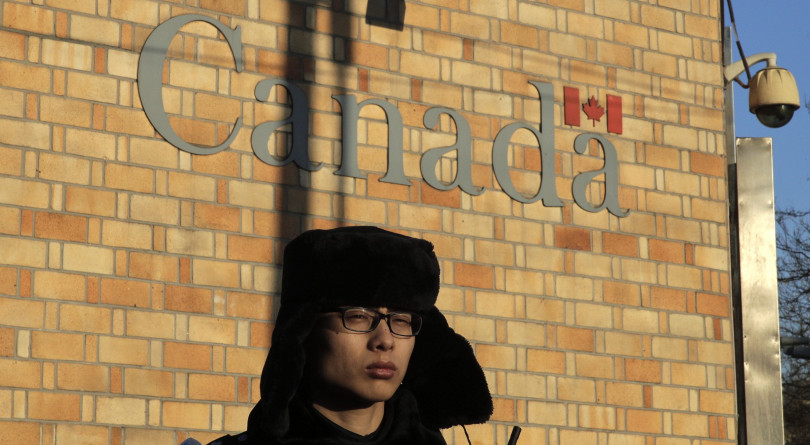 A police officer stands watch outside the Canadian Embassy in Beijing on Dec. 12, 2018 (AP Photo/Andy Wong)

The dawn of the Trudeau era on the world stage saw the newly elected Prime Minister receive a rock star’s welcome at his first gathering of world leaders—the G20 summit in Turkey. A few days after that, screaming crowds greeted the PM at the APEC summit in the Philippines. Trudeau’s first world tour was buttressed by his message to presidents, prime ministers and monarchs everywhere that Canada “was back” after a decade under Stephen Harper. The fawning response to Trudeau stepping off an airplane almost anywhere lasted for some time—a long honeymoon for the industrialized world’s newest liberal star.

Of course, Trudeau and his foreign ministers—first, Stephane Dion, and then Chrystia Freeland for most of the term—eventually found trouble, finding foes where there used to be allies and fighting fires that weren’t always under their control. As Canada gets ready to vote, Canadians can find fraught foreign files when they look north, south, east and west. Here are the big three that will factor in the campaign.

Every party leader, economist and political scientist, and the vast majority of businesspeople, would say Canada’s relationship with the United States is its most important by almost any measure. Trudeau got off on the right foot with former president Barack Obama—their famous “bromance” made endless headlines whenever they met—but the lion’s share of the PM’s first time saw him face off against President Donald Trump.

Trump’s aggressive renegotiation of the North American Free Trade Agreement would pose an almost existential threat to Canadian exporters. But the new deal, which he proudly renamed USMCA, has been widely considered a Team Trudeau victory.

Nevertheless, Conservative leader Andrew Scheer has said he would have done better, even as prominent Conservatives have praised the PM.

Other troubles loom: At the start of the 2019 election campaign, neither the Canadians nor Americans had ratified the new deal (which is called CUSMA in Canada). The Liberals refused to pass a law until the Americans dropped their tariffs. At the same time, Democrats in Washington wouldn’t endorse the deal. The old NAFTA is still the law of the land. The next PM isn’t finished with the file.

Halfway through his term, Trudeau aspired to launch free-trade talks with China. But then the PM dawdled through a series of international gaffes: a much-mocked trip to India, a bungling of last-minute change to the Trans-Pacific Partnership trade deal, and a trip to China that didn’t include any substantive progress on free trade.

Then, on Dec. 1, 2018, Canada-China relations soured and rapidly hit rock bottom after the RCMP detained Meng Wanzhou, the chief financial officer of Chinese telecom giant Huawei, as she transited through the Vancouver airport. China retaliated by detaining a consultant named Michael Spavor and a former diplomat named Michael Kovrig.

Trudeau has been criticized for not taking a hard enough stand against the increasingly aggressive authoritarian country, especially in light of his past efforts to form closer business ties there. But how to deal with China without putting Kovrig and Spavor at risk will be a major challenge for whoever wins the election.

The rise of populist nationalism

Trudeau’s election appeared to signal a new moment in global affairs—the emergence of a liberal democrat who called himself a feminist and waded into crowds of admirers. Trudeau’s win followed that of Matteo Renzi in Italy, and then Emmanuel Macron in France offered another jolt of the same energy in mid-2017. Since then, Renzi was swept from office and Macron’s popularity has plummeted. In their place, a new populist nationalism has swept the globe.

In mid-2016, Britain voted to leave the European Union, driven in part by anti-immigrant sentiment. A few months later, Trump’s election in November sent shockwaves around the world. In October 2018, Brazil elected the conservative nationalist Jair Bolsonaro. White supremacism is on the rise in the U.S. (and Canada), and populist nationalists who embrace anti-immigrant views could gain power in several European nations. As German Chancellor Angela Merkel approaches the end of her long run in office, for example, the far-right Alternative for Germany party is gaining prominence.

What can a middle power like Canada do? What should it do to promote liberal democratic values on the world stage?

Where the parties stand

We’re tracking every party’s election promises on a wide variety of portfolios. We’re updating the platform guide every time a party makes a promise. Click here for the full package.

No specific proposals yet. But we know they have appointed a business-friendly new ambassador in China—Dominic Barton, who has advised the Liberals for much of their time in office. So an attempt to make nice seems to be a possibility.

Andrew Scheer’s Conservatives have put several ideas on the table. Scheer has called for a “total reset” of Canada-China relations, including “a reduced reliance on trade with the country and new partnerships with others.” In other words, look for democratic trading partners in the Asia-Pacific region. Scheer also wants to move Canada’s embassy in Israel from Tel Aviv to Jerusalem (following the American decision to make the same move), launch talks to join the U.S. missile defence program, and label Iran’s Revolutionary Guard as a terrorist organization.

The NDP has called for an immediate ban on all arms sales to Saudi Arabia.

No specific proposals yet.