Election Issues 2015: A Maclean's primer on the TPP deal

Seven years ago, four countries on the other side of the globe started to negotiate an expanded trade deal they hoped would include the biggest Pacific Rim countries. The U.S. soon joined, followed by Australia and others, with Canada and Mexico invited in 2012, and Japan the year after that. Now covering countries worth 40 per cent of the world’s Gross Domestic Product and touching on everything from the auto sector to pharmaceuticals, the Trans-Pacific Partnership has a final agreement.

Most observers had been paying the closest attention to what Canada might have to give up regarding its supply-management protected dairy industry, which strictly limits dairy imports and controls the amount of milk produced in Canada to keep the prices high to provide higher incomes for farmers. So it came as a surprise when one of the items that kept the deal from being finalized over the summer was the auto sector. Any threat to either sector’s prosperity has big ramifications for the political parties, who have to tip-toe around them, especially in the middle of an election campaign.

Related: Questions and answers on the Trans-Pacific partnership deal

But the agreement includes much more than that: multiple food and agricultural sectors, financial services, forestry, pharmaceuticals and professional services like engineering are all covered under the TPP. It’s not clear right now whether Canadians will see the text of the agreement before they cast their ballots on Oct. 19; negotiators were finalizing it until 5 a.m. the day of the announcement, and it still has to be vetted by lawyers before it can be made public. The agreement has to be ratified by all 12 countries’ national legislatures before it is final.

Conservative: The Conservatives waited until the U.S. joined talks before getting involved. The government always maintained it wouldn’t sign an agreement unless it was in the best interests of Canada. Stephen Harper called the TPP “a tremendous deal” on Monday. He said that while opinion won’t be unanimous on such a broad agreement, it exceeded his best expectations.

NDP: Leader Tom Mulcair says an NDP government would not be bound by the TPP agreement. He says Harper “doesn’t have a mandate” to sign such a sweeping trade agreement with Canada two weeks from election day, and called on the Conservatives to immediately release the text of the agreement ahead of the election.

— “The NDP is going to stand up against this trade deal because it’s going to be hurting Canadian families,” Mulcair said Monday in Toronto.

Liberal: Leader Justin Trudeau told reporters before the deal was announced that he would have to evaluate it to make sure it was a good deal for Canadians. Trudeau criticized the Conservatives for negotiating the deal in secret, but said it’s important Canada be a part of a deal with so many large economies. He called on the Conservatives to immediately release the text of the agreement.

— The Liberals would hold “a full and open public debate in Parliament” regarding the TPP agreement.

Green: Last week, party leader Elizabeth May said the Greens oppose the TPP because she said it threatened supply management of the dairy sector and such Crown corporations as the CBC. She also said she was concerned it would include “provisions favourable to global pharmaceutical industries that will increase the price of prescription drugs.”

WHAT DOES THE DATA SAY? 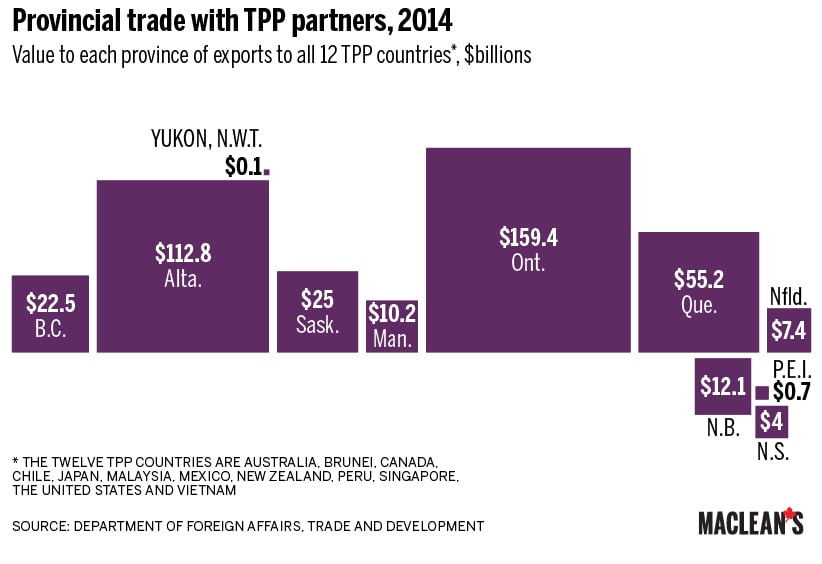