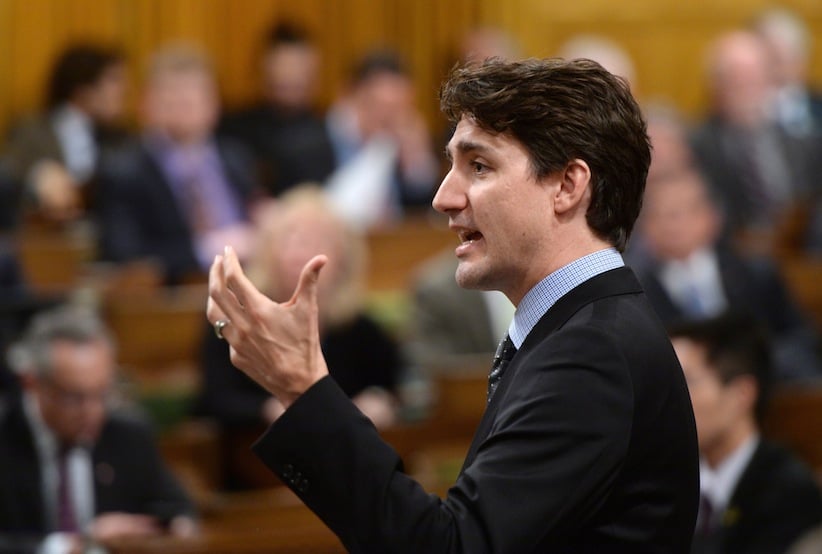 Prime Minister Justin Trudeau responds to a question during question period in the House of Commons on Parliament Hill in Ottawa on Tuesday, April 19, 2016. THE CANADIAN PRESS/Sean Kilpatrick

Electoral reform is the unloved dope amidst the feel-good clichés of the Trudeau government’s Sunny Ways. It lacks the immediate appeal of middle-class tax cuts or cabinet parity, and is about as sexy as infrastructure spending, without the nerdy zing of the long-form census. If “meaningful action on climate change” is the Michael Corleone of campaign promises, electoral reform is Fredo Corleone, Marlon Jackson and John Oates rolled into one.

That said, electoral reform was part and parcel of Justin Trudeau’s “real change” narrative that so compelled cameras and voters alike in the last election. Changing Canada’s first-past-the-post voting system, in which the winner reaps all the electoral booty no matter how slim a victory, was nothing short of the Liberal plan to “restore democracy,” as Trudeau put it last June.

This bit of hyperbole underscored Trudeau’s narrative: that prime minister Stephen Harper had cynically exploited the winner-take-all formula to usurp and maintain power. Harper did so, Liberals suggested, by favouring rural ridings over big cities and fostering a split of the progressive vote.

Though hardly as nefarious as the Liberals made it sound, the numbers seem to bear the theory out. In the 2011 federal election, it took an average of 35,134 votes to elect each Conservative member of Parliament. It took 43,771 for each NDPer. Meanwhile, the Liberals needed an average of nearly 82,000 votes to elect an MP—more than double that of the Conservatives. “We will make every vote count,” read the Liberals’ 2015 electoral platform. Translation: Harper hijacked the electoral system, and we’re taking it back.

And yet through a series of flubs and unforced errors, the issue has gone from breezy sell into a slow-motion legislative car crash. Trudeau’s now-famous elbow aside, the government’s handling of the file threatens to be the first bit of shade cast upon the Liberals’ Sunny Ways.

MORE: Everyone loses in the Thrilla on the Hilla—especially Trudeau

First, there was Minister of Democratic Institutions Maryam Monsef’s rebuffing of a (very legitimate) question from Conservative MP Jason Kenney: why not have a referendum on the issue? Flawed as it may be, after all, the current system of electing government has served the country decently enough for nearly 150 years, and is in use by some of the choicest democracies in the world.

Monsef responded by saying a referendum would exclude “those who do not traditionally engage in the democratic process, like young people, women, Indigenous persons, those with disabilities and exceptionalities, and living in remote and rural regions of this country.”

Apart from the preening political correctness oozing from this answer, the minister’s notion is demonstrably wrong. No non-coercive electoral system can ensure universal participation, yet referendums in this country generally strike a chord with the voting public. Seventy per cent of the population voted in this country’s plebiscite on conscription in 1942. Roughly the same percentage turned out 50 years later to vote in the referendum on the Charlottetown accord. Either the minister of democratic institutions isn’t aware of this, or chose to ignore it. Either way, it’s an astonishing oversight.

Still, the Liberals could have sicced a defter maw on the electoral reform file and it wouldn’t have done much to alleviate the party’s headache. Why? Canadians don’t much care about electoral reform. A bid to “restore democracy” sounds grand, yet when Abacus Data polled 3,100 people on their priorities for the next government last October, all of four said electoral reform was a priority. Those are Fredo Corleone numbers.

There is a final irony in all of this. The system that the Trudeau government is so eager to replace is itself responsible for the election of so many Liberals in last year’s election. As Andrew Coyne pointed out in January, it took an average of just 38,000 votes to elect a Liberal MP in the 2015 election—far fewer than the 57,000 Conservative votes and 79,000 NDPers.

The party was handed the keys to the country with just 39 per cent of the popular vote, and has since behaved with a wholly appropriate level of entitlement. The very committee tasked with changing the electoral system is stacked with Liberals—as it should be. The opposition has howled—as it should. To the victor go the spoils, and everyone else complains. It’s the Canadian way.

You needn’t change the system to rid the country of an allegedly hated political dynasty. All you need is a telegenic leader running an efficient campaign. Trudeau’s Sunny Ways, that ruthlessly cheerful moniker, is itself a product of our electoral status quo. Odd that he is so bent on changing it.