Elizabeth May, for the record: 'I have a smile on my face' 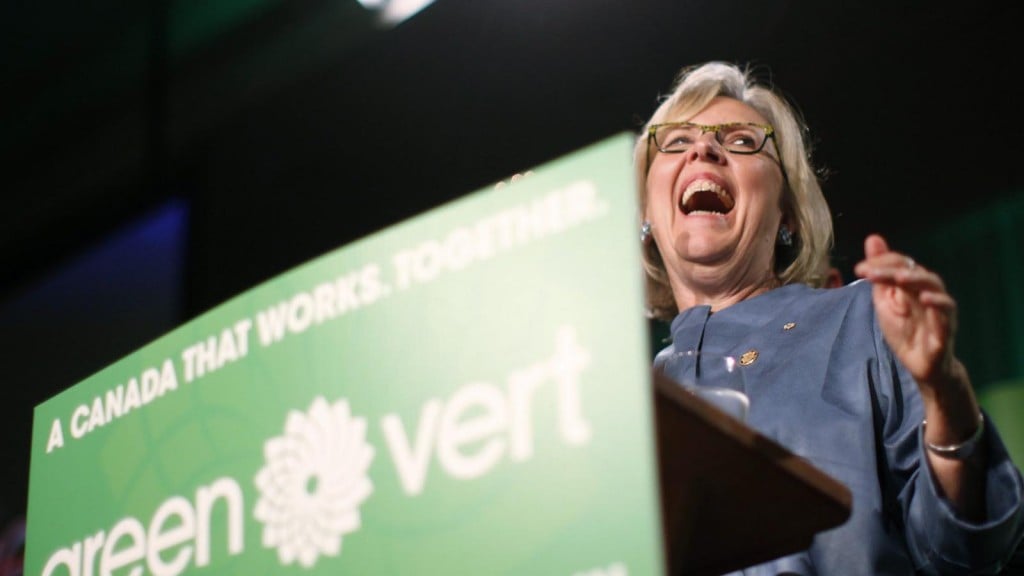 Elizabeth May: Jo-Ann, I have to say it really loud and really clear: I love you. I’m so proud to have had you run in Victoria as the Green Party’s candidate. We have had a spectacular campaign from coast to coast to coast in this country. Frances Litman’s here tonight. Fran Hunt-Jinnouchi in Cowichan—Malahat—Langford. Paul Manly, Brenda Sayers, Glenn Sollitt. Oh, my goodness, that’s just Vancouver Island. And then you look down to the North Shore, Claire Martin, Lynne Quarmby, Ken Melamed. Spectacular candidates. And going towards the east coast, Mary Lou Babineau in Fredericton. There’s been a lot – Bruce Hyer, my deputy leader in Thunder Bay–Superior North. And of course the extraordinary honour of having Gord Miller who was for 15 years the Environmental Commissioner for the province of Ontario running in Guelph. Spectacular candidates.

And we – we ran a good campaign. We ran a campaign that was positive. We never ran an attack ad. We didn’t slam other people. When I was in the leaders’ debates with abundant – you know, I wanted to be snarky. There were things I could have gone after Justin Trudeau and Tom Mulcair, but I’d made a promise to myself that the goal of Greens in the federal leaders’ debates was to be a reality check, to tell Canadians if Stephen Harper had an expanded, elastic version of his record. I could correct that. I could stand up and say Tom Mulcair has that right or Justin Trudeau has that right. I think, and as you – I think you all know how I feel about partisanship, that the level of partisanship that would say, okay, the ends justify the means, it’s okay to bring down a government that’s not very bad and allow Stephen Harper to become Prime Minister because eventually that will advantage us, that just not the people we are.

And this night. People say, “Well, you must be really sad.” Well, of course. I did not want to go back to Ottawa as the lone Green MP, I can tell you that. I had – I had really clear notions of exactly who was coming back with me, and it was a really good plan, a really good plan.

The other thing, of course, and Jo-Ann talked – we all know what occurred, particularly on Vancouver Island and in the Lower Mainland was the notion that people who wanted to vote Green shouldn’t, couldn’t, would be bad people if they did. That’s a hard thing to overcome because it comes from a good place. It comes from a place we share, which is knowing that it was simply not possible to imagine this country enduring a single second more of Stephen Harper’s policies. We knew that in our hearts. We knew that that was something we shared with the very people who are out there trying to tell their friends and neighbours that they mustn’t vote Green.

But the reality is we ran a great campaign in spite of these obstacles. And we raised the percentage of votes on – particularly on Vancouver Island and in B.C. enormously. We ran credible, strong campaigns with amazing candidates. And I believe that all those people who have told me over the last few weeks, some of them crying, they’re so sad that they’re letting me down, oh, they think the world of me apparently, they just don’t want to help me. There people out there who said, “I want to vote Green, but I can’t this time, but next time we will.” And that’s going to be something that will change the political map of Canada because that next time there won’t be the fear factor. Stephen Harper will not be Prime Minister. And – and in that next time, you know, Justin Trudeau has said that this was the last election held under first past the post. I plan to hold him to his word.

I just can’t thank everybody enough who worked so hard on these campaigns. I’m standing with my family. You know my daughter Cate. You may not know my other – my stepdaughter Nadya, my grandson Misha (ph) all helped me on the campaign and also help me in life. What can you – as Jo-Ann said, you know, your family has your back.

I also have to thank all the people who worked so hard on my local campaign. I don’t take for one minute the constituents of Saanich–Gulf Islands for granted. I didn’t take my reelection for granted.

I did receive very gracious calls tonight. First, I did hear from Tom Mulcair congratulating me on my winning my seat. I was the first leader to call Justin Trudeau to congratulate him on his enormous victory, but I also received nice calls from – from Robert Boyd, the Conservative candidate in Saanich–Gulf Islands and from Tim Kane, the Liberal candidate. It’s part of what you do in politics. There’s going to be people who win their seats and people who don’t. And I didn’t take for – the reelection in Saanich–Gulf Islands for granted.

And I’m enormously grateful to my co-campaign managers Jocelyn Gifford and Marilyn Redivo who worked so hard. To Thomas Toyvin (ph), my canvassing director. Thomas did an amazing job. All the people in the office — Laura and Mark and so many people. If I start thanking everyone, I’m bound to leave someone out, but the entire Saanich–Gulf Islands team was extraordinary.

But so, too, were Sonya (ph) and Stefan (ph) and everybody working in the Victoria campaign for Jo-Ann and all the – and Judith and all the great people working in Frances Litman’s campaign. We have had a brilliant set of campaigns with fun built into everything we did. And we will go forward from here to continue to build a Green Party that does things differently in politics.

I would share one last thought with you before I leave the stage. In 2011, when I gave my victory speech — and everyone might think that that was a happier day for me, a big breakthrough, yahoo, right? — I stood at this very same podium that my friend Ryan Macmillan (ph) has made for me — and it’s a beautiful podium. I stood at this very same podium struggling not to cry, struggling not to break down because the news that the rest of Canada knew before our polls had closed was that Stephen Harper had won a false majority, and I knew what that would mean for this country and I tried to imagine how I could as one MP going into a majority Conservative government make a difference. And I knew with – I mean I was sick at heart. Tonight is different. Tonight is different.

I don’t expect to be happy with everything a Liberal majority government does, but I don’t expect them to scare Canadians. I don’t expect them to move Canada backwards on climate action. I’m going to have to push awfully hard to get them to move far enough, fast enough, but I will push them hard. I will call them to account publicly. I will work constructively with the other parties in the opposition benches, but more than anything else, I want to have Parliament work respectfully, across party lines for the things that really matter to Canadians.

Together, we have accomplished an enormous amount in the last 11 weeks. We’ve had some really large obstacles and barriers put in our way, but what I now consider, through Bernie Sanders’ words to be a very good explanation of the obstacles in our way, it’s called the billionaire class. We know who they are and we know that there is such a thing as equality and justice, and we will not have equality and justice in this country until the wrongs committed to indigenous people, to First Nations and Métis and Inuit are reversed and addressed. We will not have justice in this country so long as any Canadian is poor, so long as any Canadian can’t afford to buy the prescription drugs their doctor wants them to have or any child goes to school hungry.

There is a cry for justice in Canada. There is a need for the conscience of the nation. We are now that party. We have that job. It is our job to tirelessly work for justice, for peace, for a planet that can survive with a human civilization that thrives. This is the challenge that we take on as Greens. We will accomplish the impossible because it’s simply not acceptable to allow ourselves to accept only those things that seem possible.

It is now time – it is now time to stop talking about – in terms of climate justice, it’s time to stop talking about what is possible and start doing what is necessary. And in this, the Green Party from coast to coast to coast and particularly here in our strongest base on Vancouver Island, we will work tirelessly to achieve those things that must be done.

Whether I’m one MP going back to Ottawa, or as I had hoped going back with reinforcements, my will is unchanged. My determination is as strong as ever, and I am so deeply grateful that in Saanich–Gulf Islands with four strong campaigns being run, even with that, the voters of Saanich–Gulf Islands have sent me back to Ottawa with more than 50 percent of the popular vote. I know I have the support – I know I have the support of the people who’ve employed me for the last four years. I plan to continue to work as hard as I can and never let anyone wrest from me that title of hardest working MP.

So let everyone go home with a smile on your face. Wake up tomorrow morning and say, “Oh, happy day, Stephen Harper is gone.” Oh, happy day.

Thank you, all. God bless you. Good night.

FILED UNDER: Elizabeth May Federal election 2015 green party of canada