Elizabeth May: The Chatelaine Interview 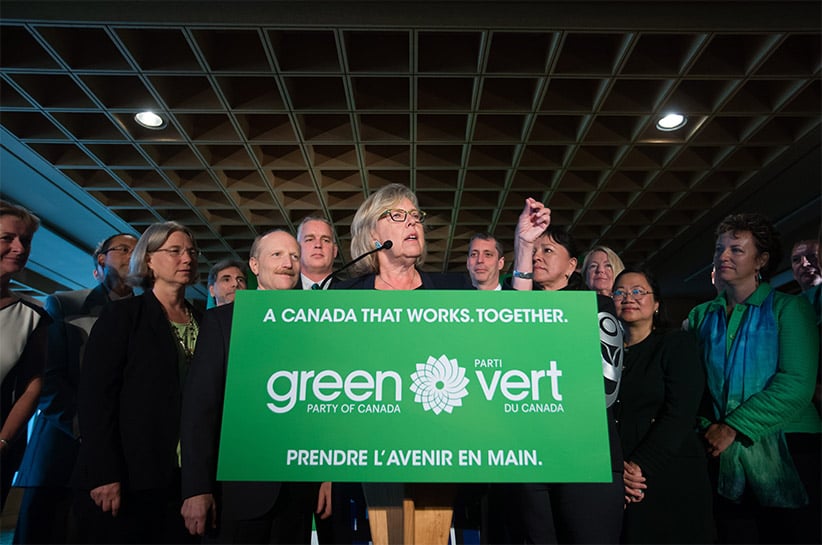 Green Party Leader Elizabeth May, centre, is flanked by local candidates while speaking during a campaign event in Vancouver, B.C., on Wednesday September 9, 2015. A federal election will be held October 19. (DARRYL DYCK/CP)

Up for Debate, a panel on gender justice and inequality set to take place on Monday, will not feature all the leaders; Stephen Harper declined to be interviewed for the event’s prerecorded Q&As. But in a series of one-on-one interviews, which first appeared at Chatelaine, Katrina Onstad and Rachel Giese spoke with four federal leaders—Stephen Harper, Thomas Mulcair, Justin Trudeau and Elizabeth May—to discuss women’s issues and beyond. Below, Elizabeth May discusses funding women’s groups, combatting toxic chemicals and moving child care into the workplace.

The eco-centric Green party isn’t quite the outlier it once was: Under leader Elizabeth May, it now has two seats where five years ago it had none, as well as record-breaking donations and the real possibility to be a player in a minority government. On September 8, May spoke to us from a ferry in her B.C. riding.

A section of your party platform was recently criticized as anti-feminist for, among other things, implying that divorce is harmful to women. It’s since been rewritten, but how did that get in there in the first place?

It was a matter of having some poorly chosen language in the way our policy was expressed. We believe too many people are bankrupted by extremely adversarial [divorce] processes. Reforms of the BC Family Act are giving people more access to mediated solutions that leave — where it’s possible — more of the family intact and certainly financially solvent in the end. It didn’t get expressed well but we revised it quickly. We’ve certainly always been a feminist party, with strong feminist principles.

Related: Why Elizabeth May is not going away

What constitutes a women’s issue?

Women care about a wide range of issues—climate change, social justice. What the Green Party tries to do is apply gender analysis to a whole lot of questions that people might not think of as women’s issues. For instance, women in developing countries are the most vulnerable to climate crisis. That’s something the UN has noted for years.

How does the Green Party address the connection between environmental issues and women’s health?

The movement across Canada to fight toxic chemicals is a women’s movement. It’s a concern about health; it’s very intimate. And of course the Green Party wants to remove carcinogens from our food, our cosmetics, our backyard pesticides.

The Conservatives have shut down 12 of 16 Status of Women offices and defunded many women’s organizations. Is the Green Party committed to restoring that funding?

Yes. Absolutely. We are sliding backwards. And part of that is due to the way Harper cut funding to women’s groups. They surgically removed government support from any organizations that were tracking and advocating for solutions that go to root causes, that advocate for safety of women, that advocate that we actually address violence against women.

The debate on women’s issues was cancelled after Stephen Harper and Thomas Mulcair refused to participate. What was the issue you most wanted to debate with them?

I really wanted to talk about the urgency of an inquiry into missing and murdered indigenous women. The problem is with politics being a man’s world. I don’t think [former NDP leaders] Alexa McDonough or Audrey McLaughlin would do what Tom Mulcair did — shut down a debate about women’s issues. The result is that the only woman leader of a political party does not get to talk about women’s issues in a debate.

We want to prioritize spaces created in workplaces. I like to think that our policy choices are holistic. One of the obstacles [to taking public transit] that I’ve heard for years from families is: Okay, it’s fine if I take the bus to work, but if I’m going to get my kid to child care in the opposite direction of where I go to work, I can’t get to work by bus or streetcar or subway. If your child-care space is located in your workspace, your commute to work is with your child.