Politics Insider for Sept. 11: The RCMP hits a federal wall in SNC obstruction probe, Singh's rebound strategy and all Maxed out in Beauce 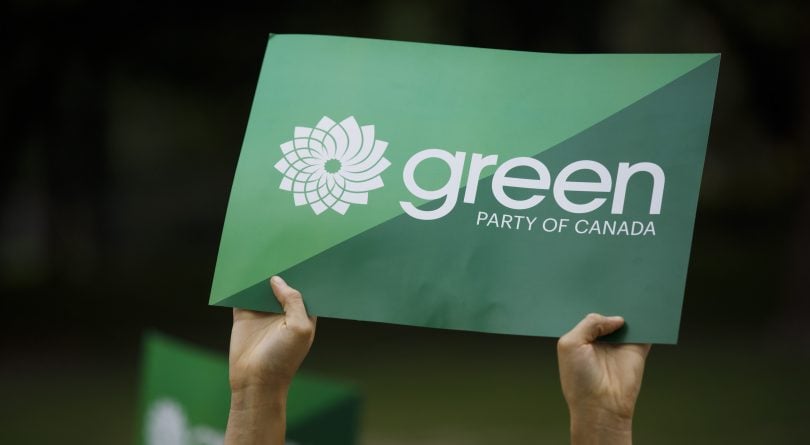 A supporter holds a sign for the Green Party of Canada as a group of candidates and supporters marched towards a discussion on climate with Green Party leader Elizabeth May in Toronto, Tuesday, Sept. 3, 2019. THE CANADIAN PRESS/Cole Burston

It’s official: After months of campaigning by all federal leaders, the mad dash to election day really gets underway today. At 10 a.m. Prime Minister Justin Trudeau will ask Governor General Julie Payette to dissolve parliament. The campaign starts with Trudeau gingerly holding a slight lead over Conservative leader Andrew Scheer. The outcome may come down to which party can best convince voters it can make their lives more affordable.

Nothing to SNC here: The race is as close as it is primarily because of the massive hit the Liberals took earlier this year over the SNC-Lavalin controversy, when Trudeau and others around him were accused of putting pressure on former attorney general Jody Wilson-Raybould to give the engineering company a way to avoid criminal charges. Now, as Trudeau sets out for reelection, the Globe and Mail is reporting the RCMP’s investigation into potential obstruction of justice has been blocked by the federal government’s refusal to lift cabinet confidentiality for all witnesses. The Globe also reports the RCMP will put their operation on hold because of the upcoming election. (Globe and Mail)

Lights, cameras: One leader in particular is hoping the campaign launch will bring a reset. With NDP leader Jagmeet Singh desperate to turn around his party’s dismal performance in the polls, John Geddes looks at the pressure Singh is under to perform:

For Singh, though, the problem is not that expectations are high; it’s that his need for an early bounce is so undeniably urgent. Even the most upbeat recent opinion surveys show the NDP two or three points below the popular vote share of 19.7 per cent it scored under Thomas Mulcair in 2015, a result the party viewed as disappointing enough to justify dumping Mulcair as leader.

And those are the polls New Democrats hope are right. Polling analyst Philippe J. Fournier writes in his latest 338Canada update that the NDP is averaging a mere 13.5 per cent across all national polls, far behind the 35 per cent level of both the Liberals and Conservatives, and not so far ahead of the Elizabeth May’s Greens at 10.4 per cent.

Singh’s first real chance to turn things around will come in the National Leaders Debate that Maclean’s and Citytv are hosting Thursday (starting at 8 p.m. EDT; 5 p.m. PDT). Trudeau is not taking part, which obviously changes the strategic calculations for Singh, Andrew Scheer and Elizabeth May. “The opportunity for Singh and for May up against Scheer is that they can be seen as the progressive champions when Trudeau, they can argue, didn’t have the guts to do it,” says David Coletto, CEO of the Ottawa-based polling firm Abacus Data. (Maclean’s)

Incidentally, Singh is so far alone in making use of the Parliamentary Budget Officer’s offer to cost party promises, providing him with useful headlines on which to campaign, like this: “Federal NDP’s proposed ‘super-wealth tax’ could raise $70B over 10 years, budget watchdog finds.” The Liberals, Conservatives, NDP and Greens have all said they would give their promises to the PBO to analyze ahead of time. As the party promises get rolled out, the PBO releases its reports. For those who like their PBO platform costings fresh, here’s where you’ll find them as they’re released: PBO Estimates.

Madly off in all directions: In many voters’ minds, Elizabeth May’s Green Party might seem singularly focused on cutting Canada’s greenhouse gas emissions to zero, but the past week has seen the party’s candidates tread well outside the climate sandbox. After May said she would not block Green MPs from reopening the abortion debate — followed quickly by a party statement that such a scenario would never arise — two Green candidates were shown to have made anti-abortion statements in the past, even if they now claim not to remember making them.

Then Pierre Nantel, a Montreal MP who was booted from the NDP last month only to join the Greens, declared himself a sovereignist and urged Quebec to separate from Canada. “Let’s separate as fast as possible. But as long as we are here, let’s defend Quebec in the Canadian context,” he said while defending Quebec’s Bill 21, which bans provincial civil servants from wearing religious symbols like turbans and hijabs. The Greens don’t seemed overly concerned with Nantel’s separatist leanings, telling the Toronto Star national unity is “not one of the party’s core values.” (Toronto Star)

Mad Max 2: Admit it. It’s been a very long time since anyone thought the satirical Rhinoceros Party was funny, let alone still a thing. But even the 22 Minutes of political parties has its moments, like now. Maxime Bernier, just not that Maxime Bernier, is running in the Quebec riding of Beauce, and it’s likely to cause headaches for Max the First. The Rhinoceros Party confirmed it is running a candidate with the same name as the leader of the Peoples Party in his home riding, and Elections Canada says that’s not breaking any rules. “There are many people who tell me: I want to vote for Maxime Bernier, and I want to vote Rhinoceros! And so, I’ve offered them an option so they can vote Rhino and Bernier!” the Rhino Party Leader Sébastien CoRhino Corriveau said in a release. (CTV News)

A successor to the original satirical party launched in Quebec in the 1960s, today’s Rhinos, like their forebears, pledge to keep only one promise — to break all their promises. Among their platform items: to privatize the Senate, replace teachers on leave with photos of famous scientists and to nationalize bacon. However, here’s one  Rhino promise both Berniers might get behind: “In order to fight global warming, we will force all citizens to leave their windows open in the summer and to operate the air conditioning to the maximum.” (Rhino party platform)

The dynasty ends: The soap opera otherwise known as the Liberal nomination contest for Don Valley North appears over. The party put the kibosh on Laura Huang bid to run in the upcoming election. Her husband Geng Tan, the first Mandarin-speaking immigrant from mainland China to hold a seat in Parliament, announced he wouldn’t run after a constituency assistant, Ying (Stella) Yu, claimed to have had Tan’s child. While he insisted he wanted to spend more time with his family, his wife Huang put her name in the hat to replace him. The Liberals aren’t saying why her nomination was rejected, but Han Dong, a former provincial Liberal politician has been green lit. (National Post)