Erin O'Toole and the search for a new Canadian centre

Paul Wells: The Conservatives need to remake their movement for a new era. Is their new leader the person to do it? 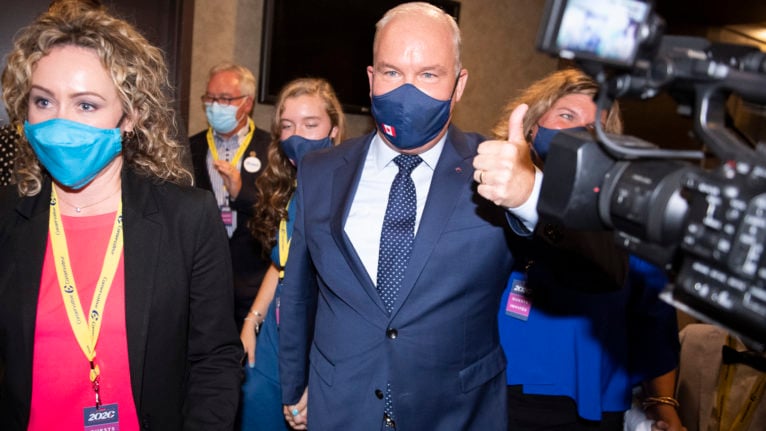 O'Toole walks to a broadcast studio after being announced as the new leader of the Conservative Party of Canada, in Ottawa, on Aug. 24, 2020 (CP/Justin Tang)

The 1996 Ontario Liberal leadership convention was an organizational fiasco. Sometime after 4 a.m. on the morning after voting began, Dalton McGuinty became the unknown new leader of a party that had lost the last two elections in a rout. He lost still another provincial election, in 1999, and won the one after that, ushering in a decade in power for his party. Nobody remembers terrible leadership-selection nights. That Erin O’Toole became the next Conservative leader after most of us lost consciousness is, in the end, a trivial problem.

Larger problems await. O’Toole is a pleasant fellow who dislikes provoking disagreement. He was Minister of Veterans Affairs for six months in 2015, and he had some success making peace with a constituency his terrible predecessor Julian Fantino had worked hard to rile. He ran, credibly but unsuccessfully, for the Conservative leadership as a nice guy in 2017, and again, successfully but not credibly, as a tough guy this year.

He wants to “Take Back Canada.” (Just as Justin Trudeau wanted Canada to be “back” in 2015. Politicians, like toddlers, struggle with object permanence: they are never sure an object or a country exists if they are not personally in charge of passing legislation for it.) He wants to stop cancel culture and is cross with anyone who wonders how he’d do that.  He would confront China systematically rather than hope forever, as Trudeau does, that its mood improves. He has forever dreamed of a common market with New Zealand, which I find weird but you may find more exciting. His plan on climate change may be a plan to do nothing at all, though his reference to “a national industrial regulatory and pricing regime” is surprising. It could mean anything. Maybe more of nothing. Maybe a robust cap-and-trade scheme.

Large parts of his platform are unremarkable. In betting on O’Toole—not wholeheartedly; Peter MacKay won more votes on every ballot but the last, and the previously unknown Leslyn Lewis won more than both of them on the second ballot—Conservatives seem to be hoping that small adjustments to the Andrew Scheer model of Conservatism will suffice to finish off the Trudeau Liberals. Scheer would not march in a pride parade. O’Toole hasn’t but plans to, depending. Scheer was pro-life but insisted he’d do nothing about it. O’Toole is said to be pro-choice, though the pro-life Campaign Life Coalition admits it was left to guess about that, and he spent part of the campaign insisting he’d give more latitude to anti-abortion cabinet ministers than Stephen Harper did.

Maybe the next election will be about threading a needle more adroitly than Scheer could: closer to the positions of other parties on abortion, less categorical on carbon pricing, willing to attend his first pride parade. Maybe Alberta and Saskatchewan Conservatives, who fired a shot across O’Toole’s bow by supporting Leslyn Lewis in greater number than they supported him, would stay motivated to vote for an O’Toole-led party. In that world, increasing fatigue with the Trudeau Liberals could put the Conservatives into minority-government territory.

This whole discussion is based on the assumption that O’Toole’s goal is to eke out a narrow win by playing defence better than Scheer did. If he’s aiming for more than that by changing the terms of political debate in Canada, there’s not much sign of that in the campaign he just ran. Elections in Canada are about the broad political centre. You either take the centre from your opponents or you define a new centre they can’t reach.

I think the cultural centre in Canada has moved since Stephen Harper essentially defined the Conservative Party in 2003-2006. Most of these changes are still dismissed by a lot of Conservatives as “political correctness.” But Stephen Harper’s apology in the Commons for Indigenous residential schools, which led to the Idle No More protests, and the commission of inquiry into missing and murdered Indigenous women and girls, change the context for any discussion of what Canada owes Indigenous Canadians. The Black Lives Matter movement called out real injustice which persists and is recognized by a growing majority of Canadians. In 2019 every conservative and Conservative head of government in Canada promised to campaign against Trudeau’s climate policy. That “resistance” basically lost the 2019 federal election in a rout: Trudeau was returned to power in a Parliament where he can be sure of NDP, Green and Bloc Québécois support on climate and energy issues.

Far from being secondary or accessory elements of Liberal electoral appeal, this bundle of issues put a hard floor under Liberal support among university-educated voters and those in big cities in Central Canada. And it made every other opposition party likelier to support the Liberals than the Conservatives, if forced by electoral math to choose. Does that guarantee eternal Liberal government? Hardly. But it helps explain why the semi-annual Trudeau scandals, messes and controversies—Aga Khan, tax treatment of small business, India, SNC, blackface, WE—never seem quite enough to endanger the party’s re-election chances. It’s because for a lot of voters, the Conservatives are different in kind from any other party. Too different to trust again with power. So Trudeau can still polarize an election in ways that line up every other party, all of their supporters, and most of Ontario and Quebec, out of the Conservatives’ reach.

All of this suggests Canada’s Conservatives don’t need to trim their offer at the edges so much as they need to remake their movement for a new era. As they did under Brian Mulroney in the early 1980s and under Stephen Harper in the 2000s. Is Erin O’Toole a philosopher and practitioner of politics on the level of Mulroney and Harper? I doubt it. But I’ve been wrong before, and now at least he gets to try.