Paul Wells: The Conservative leader dropped a brick of a platform document in an attempt to answer every question anyone will ever have about him and his party 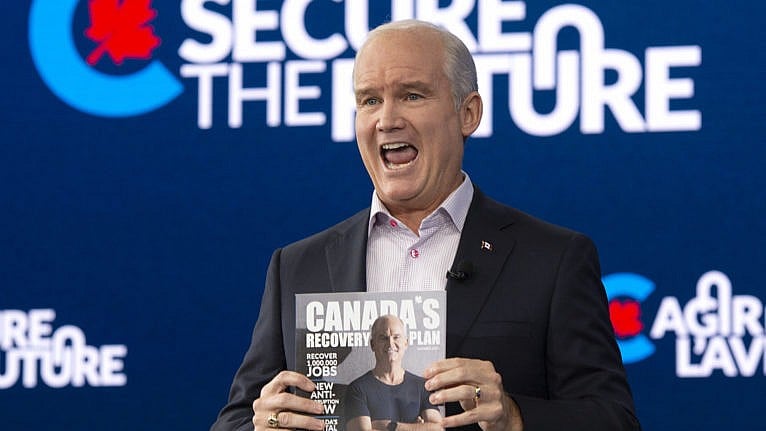 O'Toole reveals his party's recovery plan as he campaigns on Aug. 16, 2021 in Ottawa (Ryan Remiorz/CP)

They shackle entire governments, struggling with the unimaginable realities of life three years from now, to the best guesses a few campaign strategists were able to make last month. They crowd out the civil service’s policy-development function, because the first thing a new PM’s transition team says to the Privy Council Clerk who greets them is, “Shush. Do all of this.” They discourage agility amid changing circumstances because everyone’s busy ticking off stale boxes so they can run for re-election on “promise made, promise kept.” They practically guarantee fiscal trouble because who’d ever campaign on an appropriately pessimistic outlook for the economy?

Fie on the whole mess. The best way to run for high office would be to say, “You know me. Meet my team. Do we seem solid? Count on us to handle whatever comes our way.”

Of course I’m outvoted. Constantly. Whatever their worth as blueprints for government, thick platforms often work a charm in campaigns, especially if the goal is to rebut widespread worry that the leader in question is a lightweight or a nutbar. Modern campaign credibility-building was invented by Jean Chrétien’s Liberals in 1992 with Creating Opportunity: The Liberal Plan for Canada, instantly dubbed the Red Book. It transformed Chrétien from a yesterday’s man without a clue to a big thinker with an eye for detail. “It’s in there. Read it,” he’d say. Ontario’s provincial Conservatives under Mike Harris won power back in 1995, after a decade of Liberal and NDP governments, with the Common Sense Revolution pamphlet. And Justin Trudeau did a lot in 2015 to parry perceptions that he was a lightweight with Real Change: A New Plan For a Strong Middle Class (.pdf here). And even though each of those documents would have occasion to cause grief for its authors, they all worked, so they’ve spawned a hundred more or less successful imitators over the years.

This year the emerging novelty is a preference for early platform launches, a repudiation of the notion that you should dribble out your announcements for weeks on end, maintaining suspense and keeping campaign reporters from getting bored. Jagmeet Singh’s NDP went for a big bang last week with the release of the party’s entire platform, Ready For Better. And on Monday Erin O’Toole did the same, releasing the entire platform (Canada’s Recovery Plan) on the campaign’s first full day. Well, all of it except the costing: since it’s up to the Parliamentary Budget Office to check costing claims, and they couldn’t do that in a timely fashion because of the snap election, the costing will come later, Conservative campaign strategists told reporters on Monday. Meanwhile, apparently everything O’Toole is promising is free! I kid.

The problem O’Toole seeks to address is that, to borrow the language I used a few paragraphs ago, lots of people worry he’s a lightweight and a nutbar. A lightweight because a lot of his public pronouncements until now have been comically low on detail—Justin Trudeau got NAFTA wrong, we need a plan, the debate is over, whatever random combination of fridge magnets you want to assemble. A nutbar because he campaigned as a “True Blue” and then discovered his party doesn’t believe the Earth is round, or some such.

Canada’s Recovery Plan (rejected title: Erin O’Toole’s Hail Mary Pass) is an attempt to answer every question anyone will ever have about O’Toole and his party. Surely a doomed attempt—it’s always easy to come up with more questions, this week often featuring the words “nasal swabs”—but ambitious in the trying nonetheless. It starts out a little pre-school (Actual quote from the first page of text: “What is Canada’s Recovery Plan? It’s a plan. A very detailed plan.” Gee thanks, Einstein). But before it’s done it sprawls across nearly twice as many pages as Trudeau’s 2015 platform. The word “detail” and its derivatives appears 54 times, often in chapter titles that read like so much grim found poetry: “A Detailed Plan to Lift Up Working Canadians/ A Detailed Plan to Support Working Families/ A Detailed Plan to Lower Prices/ A Detailed Plan to Tackle Home Prices,” and on and frickin’ on.

Another word frequently spotted in the thing is “support,” also a favourite of the Trudeau government, especially since COVID-19. In Trudeauspeak, “support” means “give money to,” and I suspect O’Toole swiped it to convey the impression this year’s Conservatives are more spendy than previous generations. “Support” and its derivatives appear 190 times in the CPC platform, including a record 23 appearances over the four pages from 108-111. What’s the beneficiary of this four-page burst of support? I was surprised to discover it’s the rest of the world, for it’s in his platform’s foreign-policy section that O’Toole feels most, um, uplifting.

Among the very many things he wants to support: “Taiwan’s participation in multilateral fora”; “a climate-conscious, clean alternative to the Belt and Road Initiative;” “regional security” across “Pakistan, Bangladesh, Nepal, Sri Lanka and beyond;” “Israel’s existence as a sovereign democratic Jewish state” and “the aspirations of the Palestinian people and a two-state solution leading to a Palestinian state;” and “East Africa with data and infrastructure development.”

So the gauntlet is thrown. If you don’t vote Conservative this year, I guess you just don’t want a digital East Africa. It’ll be interesting to see whether this brick dominates O’Toole’s campaign or whether, having dropped it, he never mentions it again. I’ve seen both happen in various campaigns. It’s a drag that the Parliamentary Budget Officer hasn’t checked the Conservatives’ math, though they swear they’ll fix that in future editions, once the PBO reports. It’s close to a sure thing that amid all these words, there’ll be something to upset Conservatives’ opponents and probably also some supporters. Whatever happens next, at least, O’Toole can tell himself he left everything on the field, and indeed that he put it out there early.