Erin O'Toole is also a candidate for the Tory leadership

Politics Insider for Jan. 28: The anti-MacKay enters the race, the real MacKay can't speak much French and the CBSA should write screenplays 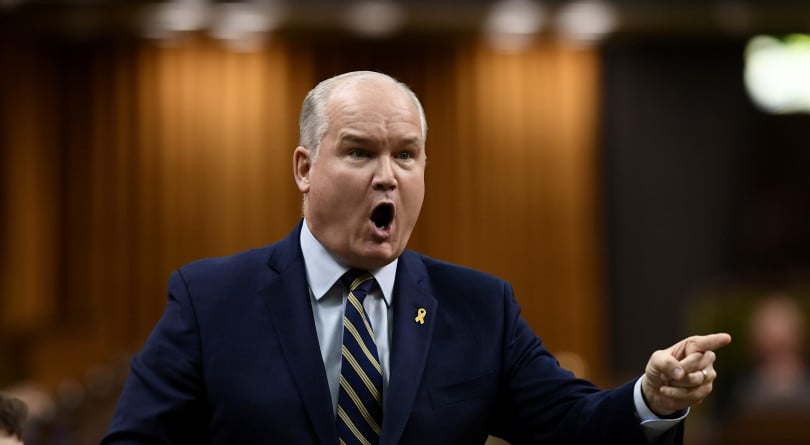 Conservative MP Erin O'Toole asks a question during Question Period in the House of Commons on Parliament Hill in Ottawa on April 5, 2019. (Justin Tang/CP)

They’re back: The bright lights of West Block shone down on the House of Commons yesterday as outgoing Conservative leader Andrew Scheer pelted Prime Minister Justin Trudeau with his first questions of 2020. First, in French and then English, Scheer implored Trudeau to admit the new NAFTA, which the Liberals hope to speedily pass into law, is weaker than the old NAFTA. They also disagreed about the state of the economy and Canada-China relations. Just like old times. Watch the full five-minute exchange.

Erin O’Toole joined the Tory leadership race yesterday, hot on the heels of fellow moderate Peter MacKay‘s own announcement. O’Toole’s first campaign video—since 2017, when he last ran for the job—set himself up as a champion of workers (including auto workers in his own GTA riding), an opponent of “cancel culture and the radical left” (featuring dramatic b-roll of a dismantled Sir John A statue), and the opposite of a career politician (expect many reminders from the O’Toole camp that he served in the Air Force for a dozen years).

Yesterday, hundreds of you expressed a keen interest in MacKay’s campaign logo. It’s only fair to offer you a glimpse of O’Toole’s logo and slogan—True Blue Leadership—that artfully links two shades of blue. Unity, mmm’kay?

Why can’t Peter MacKay speak French? The presumed frontrunner to the Tory crown spent 18 years in Ottawa, where he served stints as a major party leader and, later, a senior cabinet minister. Stephen Maher writes in Maclean’s that MacKay had access to free French lessons for years—but bilingual he is not, as his weekend performance proved.

After he left politics, when he went to Toronto, MacKay did not go to one of the “seven sisters,” the big Bay Street firms where high-profile former ministers usually end up, which seems odd to people who live in that world. Before Conservatives select him as their champion, it would be good to know what kept him so busy that he didn’t have time to study French.

How is O’Toole’s French? You be the judge.

This morning, a pair of Conservative MPs will talk about an opposition day motion. Luc Berthold and Matt Jeneroux want the House to ask the Auditor General to audit the government’s $186.7-billion infrastructure spending plan. They point to a Parliamentary Budget Office report way back in March 2018 that says changes were made to that plan, but when the PBO requested a new plan it found it apparently “does not exist.” This may not end well for the Liberals. Read the full text of the Tory motion.

Iranian Canadian Legal Professionals is teaming up with Pro Bono Ontario to work on behalf of the families of Flight 752‘s victims. The ICLP will “facilitate the recruitment of Farsi-speaking lawyers to provide legal assistance to victims’ families on a pro bono basis.” That initiative will draw on two-year federal funding for victims’ assistance that amounts to $218,029.

This morning, Trudeau and his cabinet will meet for the first time since their retreat last week. Ministers who have things to say will talk to reporters at around noon. Only flies on the wall know what the cabmins say behind closed doors, but presumably they’ll have to confront the payment of Harry and Meghan‘s security costs at some point.

Behavioural economists know all about how to dangle incentives in front of consumers to convince them to change their habits. They’re likely not surprised that a federal rebate worth up to $5,000 for taxpayers who buy electric vehicles hoovered up nearly half of its three-year, $300-million budget in about eight months. That scoop comes from the Canadian Press Ottawa bureau, which routinely ATIPs the briefing books dumped on ministers at the start of parliamentary sessions.

The Canada Border Services Agency announced the seizure earlier this month of 20 kg of cocaine—worth about $2.5 million—at Toronto’s Pearson Airport. In a duffle bag. With “15 brick-shaped objects.” From the Caribbean island of St. Maarten. Were the smugglers trying to be cliché?