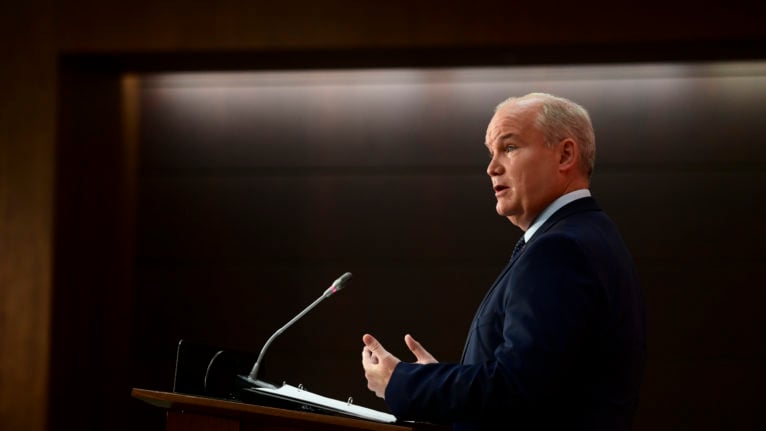 Two weeks ago, Erin O’Toole unveiled his top staffers. Last week, O’Toole named his senior caucus team. And yesterday, the new Tory leader released his shadow cabinet—42 MPs who will face off against Liberal ministers when the House of Commons comes back on Sept. 23. The new team is a bit of an overhaul. O’Toole dropped 23 MPs from Andrew Scheer‘s last shadow cabinet. He gave himself domain over Mona Fortier‘s middle-class prosperity portfolio. The new leader has a new line for a new era: “It’s time to take another look at the Conservative Party.” It’s certainly a softer approach than Take Back Canada.

Cosmic math: 42.98 per cent of MPs earned a gig on either the senior team or shadow cabinet—almost precisely Peter MacKay‘s final-ballot vote share.

Rent relief relief: It took until a week after the first of the month, when struggling commercial tenants owed their landlords their monthly due, for Finance Minister Chrystia Freeland and Small Biz Minister Mary Ng to extend federal-provincial rent relief another month. Advocates say the program hasn’t seen nearly the take-up required, in part because qualifying took way too much paperwork. But the feds say 106,000 businesses representing a combined 994,000 employees—they’re holding out for the one-million mark—benefited from $1.32 billion in forgivable loans (a little over half what was budgeted).

Foreign Minister François-Philippe Champagne has abandoned diplomatic language in the aftermath of Russia’s “hideous poisoning” of opposition leader Alexei Navalny. Champagne and G7 allies condemned the attack on Navalny “in the strongest possible terms” and called the poisoning, which German toxicologists confirmed was carried out using a chemical nerve-agent developed by Russia, “another grave blow against democracy” in that country.

A former budget and policy director for Bill Morneau says Canada needs a new “fiscal anchor” to guide its budget-making and prevent dreaded market uncertainty. Robert Asselin, a key advisor for the first two years of the Liberal government, is now a senior vice-president of the Business Council of Canada. He wrote in a LinkedIn post that emergency pandemic spending obliterated a declining debt-to-GDP ratio—which the Liberals had embraced as a path to fiscal responsibility—and the feds desperately need a new fiscal north star. Asselin suggests spending as a percentage of GDP may be more “realistic and useful.”

The GOP after Trump: Michael Fraiman, writing in Maclean’s, takes stock of what’s happened—and what might happen next—to a Republican Party now defined by the current president’s agenda. Whoever succeeds Trump in 2024 “must pick up the pieces of his chaotic mandate and forge them into policy, setting a course for the party in the 21st century.” Writes Fraiman: “The battle for the soul of the GOP has just begun.”

Free-market capitalism created 20th-century America. Today, combative Republican factions are yanking at their party in a national game of tug-of-war to decide the direction of a post-Trump GOP. After decades of stagnation, his explosive presidency has created an opportunity for different types of Republicans to engage with the electorate and make their voices heard.

Ian Shugart, the influential clerk of the Privy Council who oversees the federal bureaucracy, has a new deputy this morning. After a shuffle among the deputy minister set, Christyne Tremblay is also the DM for intergovernmental affairs. For the last four years, Tremblay served as DM at Natural Resources Canada, where she was shepherding Canada’s transition to renewables (and was heavily lobbied by the energy sector). Jean-François Tremblay will move to NRCan from Indigenous Services and Christiane Fox will move from intergovernmental affairs to Indigenous Services.

A new high: After federal Tories signed up a record-high number of members this year—nearly 270,000 during the leadership campaign—the Green Party has set its own record, also on the eve of a leadership vote, with 35,000 members—about 13 per cent of the Tory total.

When Sylvie Parent, the mayor of Longueuil, Que., tested positive for COVID-19, the result was a cascading series of voluntary isolation announcements that led to the Montreal mayor’s office. Valerie Plante met with Chantal Rouleau, the provincial minister for the Montreal area, who’d met with Parent alongside a gaggle of Quebec cabmins. They’re all in isolation. Plante will await the results of Rouleau’s test.