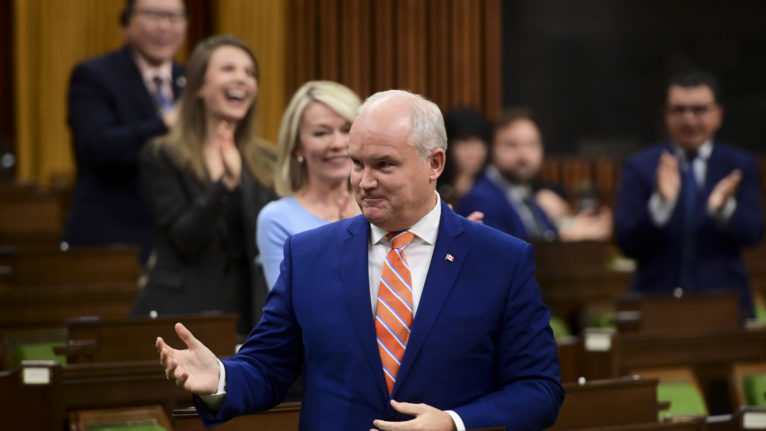 Conservative leader Erin O'Toole stands during question period in the House of Commons on Parliament Hill in Ottawa on Wednesday, Sept. 30, 2020. (Sean Kilpatrick/CP)

Erin O’Toole delivered his first major speech in the Commons yesterday as he articulated the Official Opposition’s opposition to last week’s Speech from the Throne. O’Toole was clad in a bold blue suit and an orange tie that recognized Orange Shirt Day, an effort to raise awareness about the horrible impact of residential schools on Indigenous people. He slammed the Trudeau team as entitled, unwilling to learn lessons and all too willing to reward Liberal friends with plum contracts. Much of the speech echoed themes typical of former leader Andrew Scheer‘s parliamentary pronouncements.

But O’Toole also jabbed at New Democrats sitting in the far corner. After celebrating service clubs—O’Toole is a member of the Royal Canadian Legion and a Rotarian—he recalled his roots as the son of a GM employee. “Organized labour helps build strong communities,” he said, celebrating unions as forces for good that lets workers know “someone has their back.” GM’s union, Unifor, declared electoral war on O’Toole’s predecessor. The gauntlet is, apparently, thrown.

Thank you: These are technically challenging times for MPs. Tory health critic Michelle Rempel Garner name-checked an IT magician, Joshua Lind, who “repeatedly saved my life through various forms of electronic ensorcellement.” God willing, we all have a Joshua in our lives.

V-ish recovery: Yesterday, Statistics Canada published a tranche of summertime GDP growth data. Every sector of the economy grew in July, led by accommodation and food services, which grew by 20.1 per cent. The overall GDP graph resembled an incomplete V. By August, preliminary estimates say real GDP growth slowed to just 1 per cent—and both retail trade and public administration “pulled back marginally.” But more conclusive data is a month away.

Small businesses employ more than eight million Canadians. By September, a federal-provincial rent-relief program had helped 106,000 companies (representing 994,000 employees) with fixed costs to the tune of $1.32 billion. As a second wave of COVID-19 sets in across major cities in Canada, the federal wage subsidy remains—but rent relief has expired. The feds confirmed yesterday they have no plan yet to help small businesses with fixed costs, beyond a Throne Speech commitment to expand access to existing loan programs—in other words, more debt for the little guy.

Canada’s embassy in Beijing is due for an upgrade, the Globe and Mail reports. A request for proposals published by the feds is on the hunt for a firm that can develop a new master plan for Canada’s compound. The plan should incorporate “design elements that will appeal to investors, stewards, environmentalists, employees, visitors and the host country alike.” The design should balance “bold and creative ideas” and “affordable and practical solutions.” A section on the “geopolitical context” emphasizes myriad social and economic ties—but makes no mention of a nearly two-year diplomatic chill.

A mari usque ad mare: Andrew King, an Ottawa writer and artist who digs up all manner of local kitsch, tweeted a photo of a hefty Royal Coat of Arms of Canada available for purchase at Mike’s Office Surplus, a furniture and electronics supply shop tucked in an industrial park just east of the Science and Tech museum. Mike’s tells Maclean’s there are actually two coats of arms in stock. The cast aluminum relics of a local office building each weigh 70-80 pounds. They’re yours for as low as $5,000 apiece, but that price might spike. The shop claims to have sold another coat of arms to a B.C. collector a few years back for $20,000. The manufacturer appears to be Alloy Foundry in nearby Merrickville, which claims to be Canada’s oldest.

Paw patrol: After a Royal Canadian Air Force crew landed their CH-149 Cormorant in remote Saglek, a radar outpost in northern Labrador, an overnight visitor welcomed the aircraft to the area. No military personnel was able to bear witness to the event, but photographic evidence proved a certain four-legged creature wreaked minor havoc by pawing at the Cormorant. The surprise attack resulted in only “superficial damage.”