Politics Insider for Sept. 18: The Tory leader's family eventually took tests reserved for MPs and their kin, another TV host wants to be a Liberal MP and is CSIS all about Broadway? 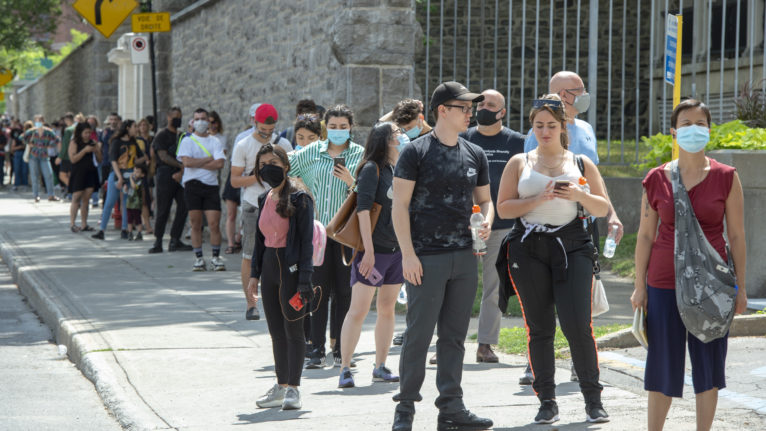 Erin O’Toole’s family appears to have endured the same COVID-19 testing tribulations as so many Ottawa families. The O’Tooles waited yesterday at a local assessment centre for hours before being told it was at capacity. Ottawa Public Health offered an appointment today, but the opposition leader’s family opted for a test reserved for MPs and their kin across the river in Gatineau. O’Toole blamed the Trudeau Liberals, who “created this mess by refusing to approve other testing methods—despite all our allies having, for months, multiple tests including much faster and less invasive methods.”

The Liberals scored a household name as a candidate in a future Toronto Centre by-election. CTV News personality Marci Ien, co-host of The Social, said she’s taking a leave from the broadcaster to seek the party’s nomination in Bill Morneau’s former digs. Later in the day, the party confirmed her candidacy. If she wins the riding, Ien would join Natural Resources Minister Seamus O’Regan as the second Canada AM host to sit in the House of Commons. Ien replaced O’Regan on the show in 2011.

This week, CBC News reported an American billionaire shipping supplies magnate found her way into Canada for a visit to her company’s plant—and skipped the 14-day quarantine rule. Liz Uihlein and a pair of senior execs visited Uline’s facility in Milton, Ont., and the company said the Americans were “granted formal exemptions.” But no department would admit to giving the green light. Yesterday, Public Safety Minister Bill Blair clarified that no special exemptions were approved by any minister. “A decision was made by officers based on the information provided,” he tweeted. “Entry should not have been permitted.”

Lessons from Throne Speeches past: Don’t believe the hype, writes Tom Parkin in Maclean’s. Parkin, who worked for NDP governments in Ontario and Saskatchewan, takes a harsh view of Justin Trudeau’s throne-speech track record. In 2015, the government promised to end first-past-the-post voting. In 2019, the government promised to empower cities to enact handgun bans. Neither has happened. But Parkin’s political advice for the opposition is to ignore the lofty rhetoric and get down to governing.

Opposition parties may want to consider that if Canadians have lost confidence in Trudeau, it’s not because of a lack of good words. Opposition parties that want to earn the trust of Canadians might be right to let the words pass—then use this minority parliament to press hard to ensure that this time the rubber does indeed hit the road.

Calgary’s pandas need a flight home: For several months, the Calgary Zoo has insisted that Da Mao and Er Shun, the two lovable giant pandas who spent five years in Toronto and the last two on the Prairies, would be healthier back home in China. Pandemic-challenged supply chains have meant the zoo is sourcing its bamboo domestically—the supplier’s identity is a mystery—but the voracious eaters are running out of the stuff. The zoo clammed up about its quest, citing “emerging government sensitivities,” but that comment left Ottawa guessing.

Two senior federal sources, speaking on condition of anonymity because they weren’t authorized to comment publicly, were baffled by the zoo’s characterization and denied any sensitivity on their government’s side. Earlier this year, Environment Canada granted, and then renewed, permits to send the pandas home. When Calgary couldn’t secure them safe passage from Chinese authorities, one of the sources says, the feds even offered to help find another zoo in Canada for Da Mao and Er Shun. The zoo refused, the source says.

This morning, four premiers will hold a press conference at the Chateau Laurier. François Legault is taking over the chairmanship of the Council of the Federation from Saskatchewan’s Scott Moe (who will soon join Blaine Higgs in facing his province’s electorate). Legault will be joined in Ottawa by Ontario’s Doug Ford, Manitoba’s Brian Pallister and Alberta’s Jason Kenney. Seems like time for a new photo-op.

Is this CSIS tweet a play on Rent? The tweet’s cadence is reminiscent not only of the catchy “Seasons of Love,” but specifically the modified lyrics of a parody on the episode of The Office that bid adieu to boss Michael Scott. If there’s a Broadway bias over at spook central, we’ll sniff it out. The relevant access-to-information request has been filed.