Shannon Proudfoot: The Tory leader's big speech had a promising message about broadening his party's tent. Missing was how he plans to do it. 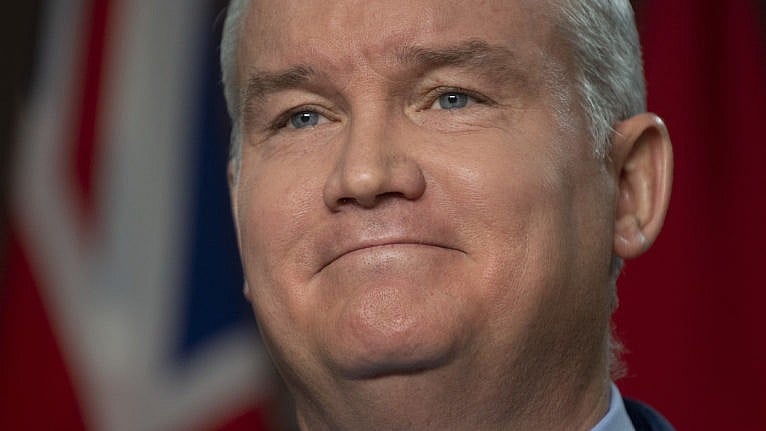 O'Toole listens to a question during a news conference on Parliament Hill in Ottawa on Feb. 4, 2021 (CP/Adrian Wyld)

“Show, don’t tell” is a familiar exhortation to anyone who’s attended journalism school or spent time in a newsroom. The idea is that it’s dull and unconvincing to declare to a reader that a certain person is witty or a house shabby; instead, you quote a clever bon mot that person dropped in conversation or describe the sagging porch and rheumy windows of the building you see in front of you. If you’re specific enough, you don’t have to announce the thing you’re trying to arrive at.

On Friday evening, Erin O’Toole delivered a well-crafted and by turns compelling speech to his party’s virtual policy convention. It was a high-stakes opportunity to present his vision to his own party and to the country at large, given that a federal election seems a near-certainty as the minority parliament approaches its second birthday in the fall. The Conservatives have been persistently lagging in the polls behind the governing Liberals, and if the smattering of unflattering stories about O’Toole that broke just as the convention opened is any indication, an internal sales pitch might be as crucial for O’Toole as one aimed at the Canadian electorate at large.

The theme that opened and then wound throughout his remarks was that the Conservative Party of Canada must show the same courage that everyone else has in living through this year that absolutely no one wanted, and gird itself to change and learn if it wants to grow. “The Conservative Party must show that we too have the courage to meet this extraordinary moment, and change,” he said. “We have lost two elections in five-and-a-half years. In that time, we have had four leaders. We must present new ideas, not make the same arguments hoping that maybe this time more Canadians will come around to our position.”

It’s an astute point and a promising political launchpad. The only problem is that O’Toole undercut his own diagnosis by telling instead of showing.

The speech was distinctly short on specifics that would flesh out “Canada’s Recovery Plan” or the party’s efforts to grow. Restoring every pandemic-ravaged job within a year, beefing up conflict-of-interest and lobbying laws, crafting a mental health action plan, ensuring Canada can produce its own vaccines and personal protective equipment so it’s not relying on China in the next mass health crisis and balancing the federal budget within the decade were the bullet-points, but they were almost entirely that. One intriguing and possibly useful idea—a national three-digit suicide hotline—seemed almost oddly specific floating in a soup of generalities.

On climate change, O’Toole first chuckled at people who had speculated that he might have something dramatic to say, warning, “I’m afraid you’ll be disappointed.” Then he drew two lines in the sand that had the effect of confusing anyone trying to figure out where he stands and what he wants to do.  First, he declared stoutly, “We cannot ignore the reality of climate change. The debate is over.” But then he said, “As important as climate change is, getting our economy back on track is more important,” adding, “Canadian voters should have no doubt” that his first priority is jobs and rebuilding the ravaged economy.

A party founded on farmers, hunters and anglers would have a “comprehensive” and “serious” plan for climate change, O’Toole said—but Friday evening contained no hints about what that might be.

Back in October, when he was a newer-still party leader, O’Toole delivered another big speech to the Canadian Club. That address was pure populism, condemning rising inequality, the worry and resentment it bred and the opportunistic elites and heartless corporate entities that have fattened themselves at the expense of the hard-working left-behinds.

“Justin Trudeau likes to say we are all in this together, but are we really? Under the Trudeau Liberals, the country is more divided than ever, divided between the winners and losers in the global economy,” he said at the time. “We can renew Canadian solidarity, but it will not be easy. Powerful forces continue to defend the status quo. Many of the rich, well-connected and well-educated have been largely insulated from the enormous economic upheavals of the last decade.”

That speech was a pointed attempt to grow in a specific direction, toward what a Tory strategist described as the “low voter”: low income, low education, low diversity and low voter turnout. The strategy was to carve out a larger slice of the next federal vote by effectively enlarging the pie, drawing in and capturing what the party believed to be a new and unclaimed bloc of working-class voters.  During the 2019 federal election there were days on which you could have stripped the names from the transcripts and swapped many of NDP Leader Jagmeet Singh’s talking points for those of erstwhile Conservative Leader Andrew Scheer.

But in front of his virtual convention audience on Friday night, O’Toole was making a different sort of appeal to broadening his party’s tent, one that is more in line with polling that shows woo-able voters are younger, more diverse and more supportive of immigration than the current base.

O’Toole listed off the core values of his party—self-determination, hard work, respect—that had built the country once and would now be crucial to rebuilding it from the pandemic ashes. “These ideals will ensure more Canadians see a Conservative when they look in the mirror, and feel good about voting for a party that will get this country moving again,” he said. “I want all Canadians to feel welcome in the Conservative Party of Canada.”

He touched on differences of skin colour, sexuality and faith, telling everyone, “You are welcome in this party—in fact, we need your help.”

O’Tool adroitly diagnosed some of the major problems facing him and his party at the moment, their potential solutions and what a weary, stressed and frightened country may be hungry to hear from an alternative to the governing party. So there’s the tell; it’s just a shame the rest of his remarks didn’t show how he would follow through on that.