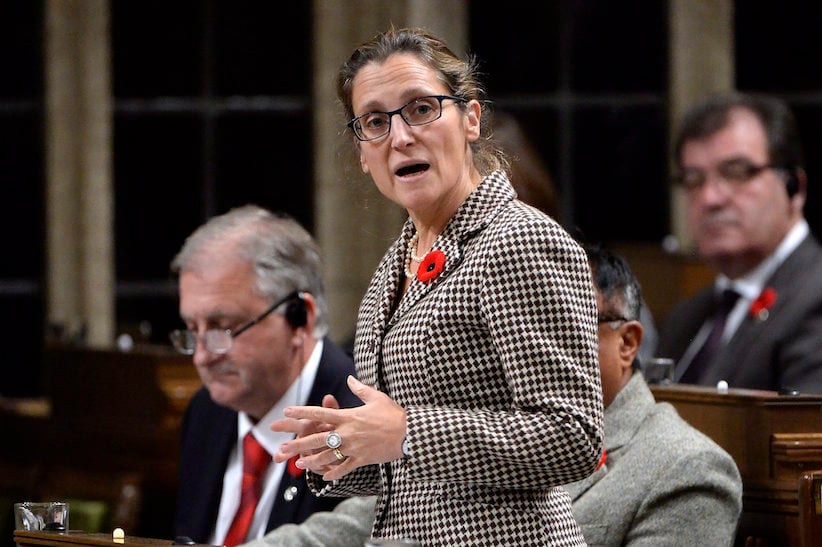 Trade Minister Chrystia Freeland speaks during question period in the House of Commons on Parliament Hill, in Ottawa on Friday, November 4, 2016. THE CANADIAN PRESS/Adrian Wyld

OTTAWA – The European Union’s envoy to Canada says International Trade Minister Chrystia Freeland’s controversial decision to walk out of talks last month to save the transatlantic free trade deal was the right thing to do.

Ambassador Marie-Anne Coninsx praised Freeland’s efforts in helping to overcome the opposition of the Belgian region of Wallonia, which threatened to derail the signing of the Comprehensive Economic and Trade Agreement, or CETA.

Prime Minister Justin Trudeau made a whirlwind trip to Brussels this past Sunday to sign the agreement — and also praised his trade minister’s efforts — after EU officials struck a deal that satisfied the Walloons.

But Conservative critic Gerry Ritz criticized Freeland in the House of Commons after she staged an emotional walk out on the talks with Wallonia two weeks ago and questioned whether the EU was actually capable of signing a major trade deal.

Ritz said Freeland had a “meltdown” and needed “adult supervision” because of her behaviour — remarks that sparked accusations of sexism, especially on social media, which Freeland herself later rebutted.

Coninsx said she would have no comment on that specific domestic political controversy, but praised Freeland’s skill at finally getting the deal done.

“Everything she has been doing has been extremely helpful for finding a solution, and this was a natural reaction,” Coninsx said Friday in an interview at the EU mission in Ottawa.

“It’s difficult to judge for any outsider, who has not been there, on the spot.”

Coninsx noted that Freeland met with Martin Schulz, the president of the European Parliament, the day after her walkout, before she left Belgium altogether.

Freeland also helped lay the groundwork for the successful resolution of the talks with the Walloons because she previously addressed similar concerns in other European countries, notably Germany, she said.

Coninsx said Freeland deserves credit for attending the political convention of Germany’s Social Democratic Party, which had raised concerns about the investor protection provisions of the agreement.

Freeland and the party’s leader, Sigmar Gabriel, eventually worked together to rework the investment protection chapter in an attempt to address criticism that it was too favourable to the interests of big business.

“Freeland has been praised by everybody, not only for her contribution of talking to the Belgians but also before when it started in Germany,” Coninsx said.

Schulz said that the European Parliament is expected to ratify CETA in December, which means it could come into force under what is known as provisional application next year.

That, along with Canadian ratification, would bring 98 per cent of the deal into force, Trudeau has said — a figure Coninsx did not dispute.

It could take several years for each of the EU 28 member countries, as well as many regional parliaments to formally ratify the deal. But by that time, Coninsx said CETA will have proven its value to EU citizens.

The EU’s free trade deal with South Korea went ahead on a provisional basis five years ago, she said, and saw a 30 per cent increase in trade in the first year.

“As soon as people feel the benefits, that will help enormously in the national discussions.”

Coninsx said EU politicians will have to directly address the rising anti-trade and anti-globalization movement that is vocal in parts of Europe.

“People fear the negative effects of globalization, its uncertainty. It’s our task to address them and to demonstrate that free trade is exactly the solution that you need.”