Canada's new government has raised expectations by simply not being the Conservatives. With these high stakes, will Justin Trudeau deliver real action? 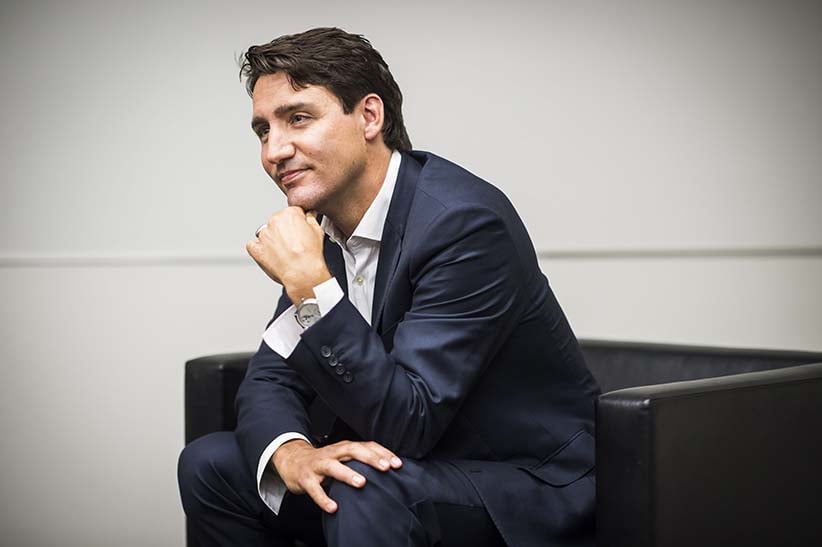 Justin Trudeau in Edmonton June 4, 2015 during an interview with the Globe and Mail’s Ian Brown. (John Lehmann/CPl)

Prime Minister Justin Trudeau has tried to set low expectations for his trip to the Paris climate conference next week, promising no plan to cut Canada’s greenhouse gas emissions until 90 days later. But the international pressure on Canada could be greater than the domestic expectations.

Observers say there’s a sense that the Paris conference is the last chance for the world to come together to stem rising temperatures, which scientists say will result in catastrophic climate change. That sense is amplified by the fact 150 countries have already committed to targets—or intended nationally determined contributions (INDCs)—ahead of the conference, and that major emitters like China and the U.S. have already reached bilateral agreements. The conditions feel right for an agreement, says John Drexhage, senior advisor to Coop Carbone, a Quebec group that advocates for green technology to cut emissions.

“Everyone’s on the train and the train has begun to leave the station,” Drexhage told Maclean’s. “There’s that kind of sense of a potentially much more constructive global engagement through this INDC process than what we’ve seen [before].”

That feeling of now-or-never could drive attention to Canada’s contributions, for which environmentalists have high hopes: the World Resources Institute, an environmental NGO, this month pointed to Prime Minister Justin Trudeau’s government as one of the stories to watch in Paris, referring to it as “new Canada.” That’s opposed to the Conservative government, who lost the Oct. 19 election to the Liberals, and who angered many by pulling out of the Kyoto Protocol when it became clear Canada would miss its targets by a long shot.

Related: At the first ministers summit, the meeting was the message

That’s a narrative the Liberals have encouraged. Environment Minister Catherine McKenna went as far as to announce “Canada is back” at a pre-conference meeting earlier this month. But she and Trudeau head to the conference with the old government’s much-maligned targets for lowering emissions. It might not be enough to promise that, unlike the Conservatives and the Chrétien Liberals before them, this time Canada has a plan to reach those goals.

Trudeau and the other leaders will kick off the climate talks on Monday before leaving the negotiating to officials, but there’s some room for him to make an announcement in his speech that day. McKenna has repeatedly said the last government’s targets are the lowest Canada will go. And while the Liberals won’t promise a plan to get to those targets until they meet with the premiers 90 days after the Paris talks, May hopes they commit to new goals. The risk for the Liberals is the fact that some experts argue the current Canadian targets are plenty ambitious enough, given the lack of the aforementioned plan to hit them.

“What I think they need to do when they’re in Paris is be clear that they are going to take significant action,” said Paul Boothe, former deputy minister at Environment Canada and professor at Western’s Ivey School of Business. “The thing that we’re short of is credibility, not ambition.”

Still, May says she’d like to see Canada start fresh. “The key thing is going to be whether Justin Trudeau actually announces new targets when he’s in Paris,” she said. “His speech could actually set in motion a successful negotiation or it might not… If he says that [he’s waiting 90 more days] I think it’s going to flatten a lot of expectations.”

That’s a lot of pressure for a government that was sworn in less than a month ago.