Maclean's didn't give Justin Trudeau much time to answer these questions, so here are his responses with a little context from us

In preparation for the Maclean’s Town Hall, Prime Minister Justin Trudeau accepted our 60-second challenge and answered a series of (non-political) rapid-fire questions. In no time, people around the world were watching and discussing the video, from the U.K. to Estonia. Here’s everything you need to know about the town hall.

Here’s our attempt to provide some context to each of his answers.

Prior to the election debate in Calgary, Trudeau’s team released a photo of him paddling a red canoe along the Bow River—at sunrise, of course. 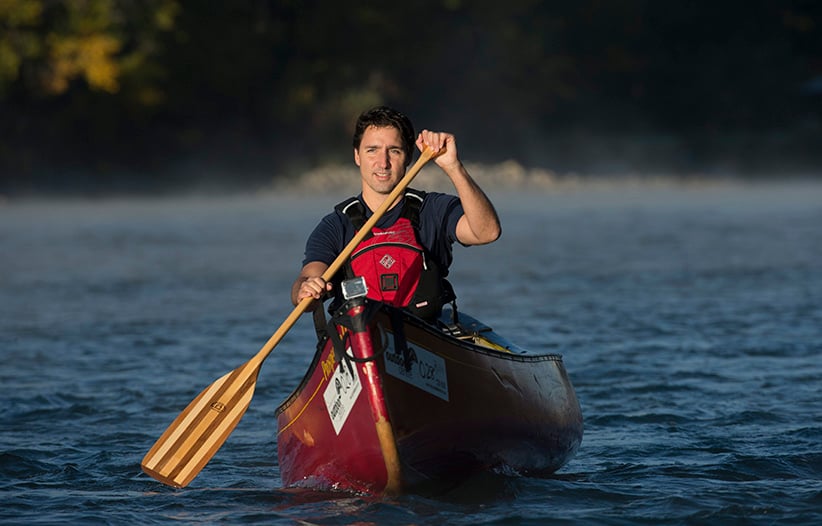 Q: First line of poetry that comes to mind.

Pierre Trudeau was a great fan of poetry, a passion he instilled in his children from a young age. Justin Trudeau closed the eulogy for his father by quoting Robert Frost’s famous poem “Stopping by Woods on a Snowy Evening.”

The line Trudeau recites in the 60-second video, however, is from Cyrano de Bergerac’s “Non, merci!” soliloquy, in which the romantic hero reaffirms his principles as opposed to alternatives like, “Dine each day upon a toad? Have my stomach worn out from slithering down the road?… No, thank  you.”

Here are the lines Trudeau began to recite:

No, thank you! No, thank you!! No, thank you! But… to sing,
To dream, to laugh, to move on, to be free, on my own
To have a keen eye and a voice of strong tone,
Wear my hat awry as I prefer,
For no reason at all engage in combat or pen a verse!

Is there any other reason Trudeau chose Cyrano de Bergerac? Well, it could be a love of his facial hair. 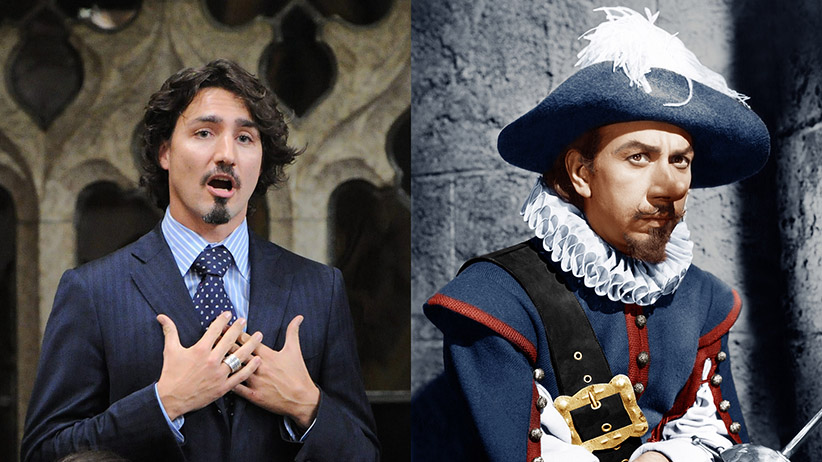 Q: Best gift you’ve ever given.

A: I gave Xavier the Millennium Falcon Lego when he was too young so I got to build it.

In 1983, an 11-year-old Justin got to see a sneak preview of Return of the Jedi with his dad. “It was better than The Empire Strikes Back and Star Wars—at least I think so,” the young boy told reporters afterwards. Decades later, the Force is still strong with this one. In October, for his first Halloween as Prime Minister, Trudeau dressed up as Han Solo and his wife, Sophie, wore a Princess Leia costume.

But the Liberal leader may have gotten ahead of himself by buying young Xavier the Lego set. The Lego Star Wars Millennium Falcon is 1,254 pieces—and recommended for ages 9-14. 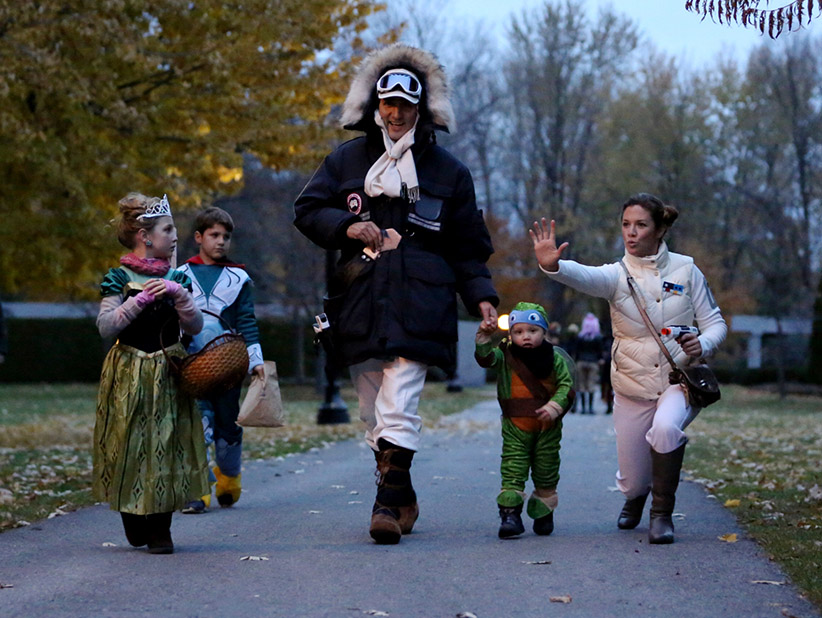 Prime Minister-designate Justin Trudeau, dressed as Han Solo from The Empire Strikes Back, walks with his children Hadrien (second from right), Ella-Grace and Xavier, as his wife Sophie Gregoire-Trudeau, dressed as Princess Leia, jokes with onlookers as the family prepares to go trick-or-treating on Halloween in Ottawa on Saturday, Oct. 31, 2015. Justin Tang/CP

Q: Language you wish you could speak.

A: Sophie speaks great Spanish. I do not. I wish I could keep up with her.

The Trudeaus speak in French at home to their three kids, but if the Prime Minister did speak Spanish, he would have seen after his election that the Spanish paper El Mundo called him Canada’s “pretty boy.”

A: Yeah, not a chance I’m answering that.

He may not pick a province, but the Prime Minister likely has a closer personal attachment to the West Coast after studying at UBC and later teaching at several schools, not to mention ski resorts, in the province. Then again, he has a political reason to be fond of Nova Scotia, where all 11 federal seats in the province went to the Liberal Party. 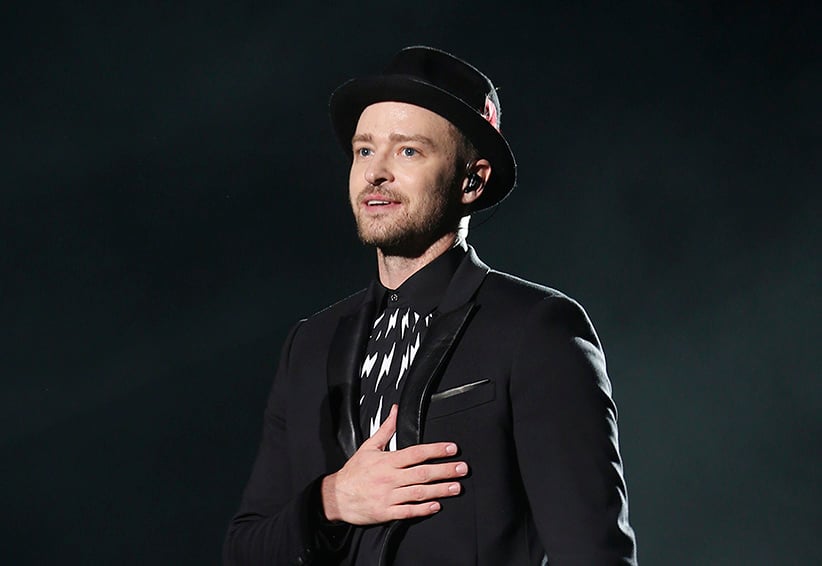 The Baltic nations include Estonia, Latvia and Lithuania, all of whom are NATO allies. 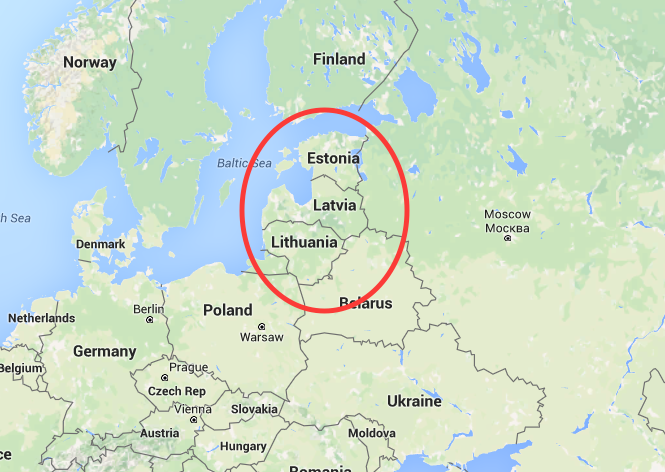 Canada was the first G7 country to recognize Latvia’s re-independence in 1991, though Canada had never actually recognized the annexation of any of the three Baltic countries by Russia during the Second World War.

They noticed Trudeau’s apparent gaffe, too. After watching his 60-second challenge, Estonian newspaper Äripäev wrote: “It remains unclear whether he doesn’t consider the Baltic countries as important or if he just does not know what they are.”

Q: Last thing you cooked on the stove.

While cooking on the Morning Show in June, Trudeau made fried eggs with guacamole (using cilantro) for breakfast. “I have go-to meals and one of them is scrambled eggs,” he said. “But scrambled eggs is boring on TV.”

A: How does he like the Canada he helped create? 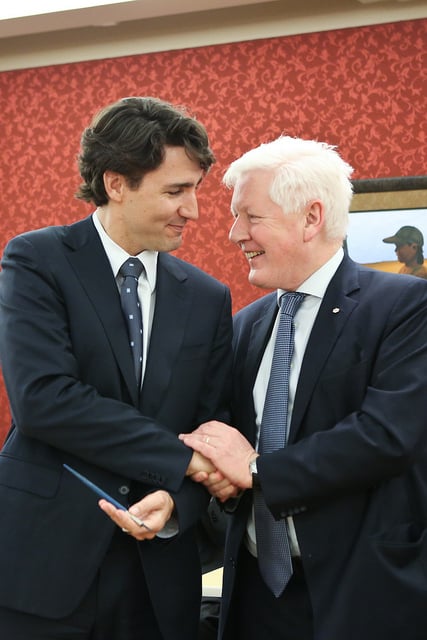 French for Jerusalem artichoke, it is not from the Middle East, nor is it a type of artichoke. Rather, it is part of the sunflower family. 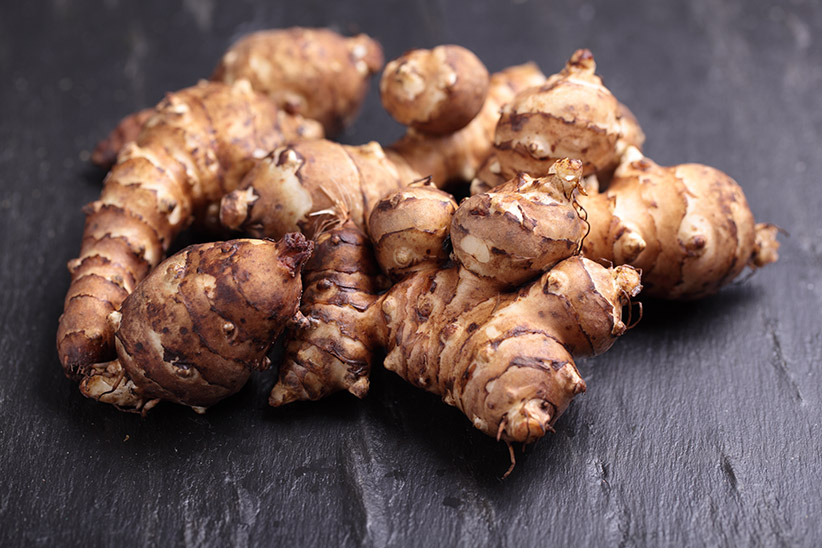 Q: Name of your first pet.
A: Smokey. And we lived on Sussex.

Smokey Sussex has not starred in any movies—in case you were wondering.

On their wedding day, Justin and Sophie drove off in a Mercedes Benz 300SL, which he inherited from his dad. His first car as a grown up, however, was a Volkswagen Jetta. 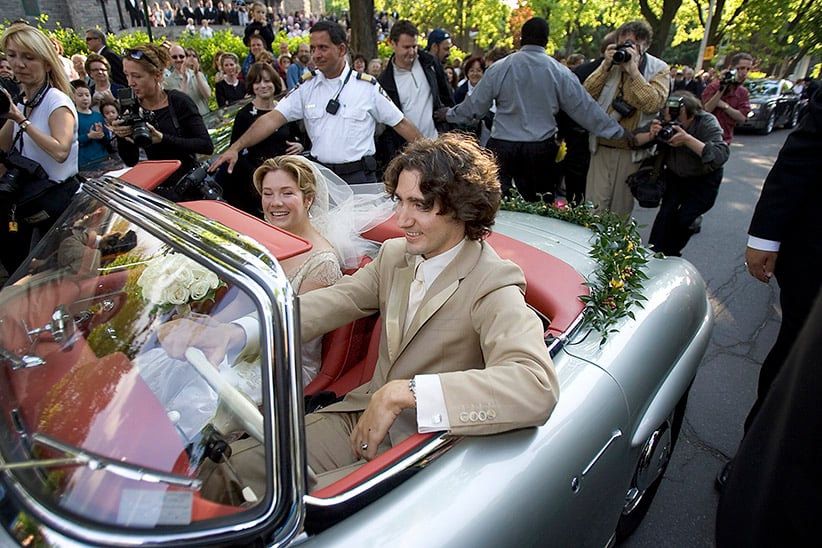 A: I geek out way too easily.

In October 2012, he got pretty excited for an interactive stick-figure web comic. Trudeau tweeted: “No doubt have something more important to be doing, but I just found the whale in xkcd’s Click and Drag, and it made me smile. #geek”

He even showed off the whale in a subsequent tweet.