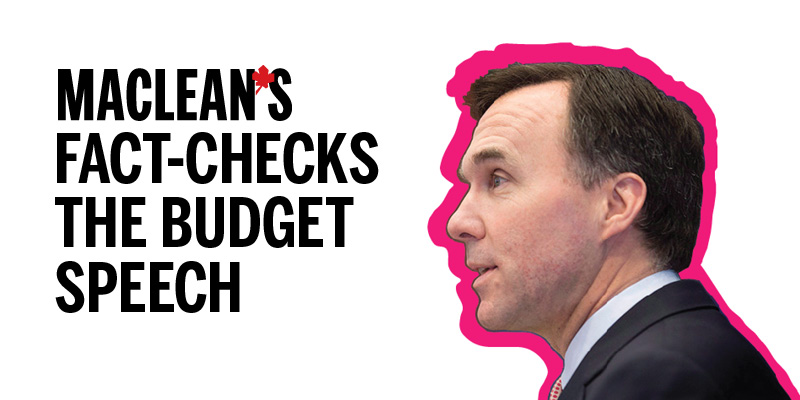 Tuesday’s federal budget announcement was Justin Trudeau’s first opportunity to shed some light on his many, many, many campaign promises.

The Liberals had no shortage of investments to announce, from an Innovation Agenda to infrastructure to helping Indigenous peoples. We took a closer look at the 2016 budget speech, finding where Morneau’s words could be a bit misleading.

1. What he said: “Our plan is reasonable and affordable. By the end of our first mandate, Canada’s debt-to-GDP ratio will be lower than it is today.”

On the other hand: Despite running a $29.4 billion deficit this year, and another forecasted $29 billion shortfall next year, the Liberals insist the debt-to-GDP ratio will drop from 31.2 to 30.9 by 2021. However a  recent report from TD Economics projected annual budget deficits of approximately $30 billion a year throughout the Liberals entire mandate, adding $150 billion to the federal debt. If that happens, Canada’s debt-to-GDP could rise to 36.1 per cent by 2021.

2. What he said: “Economic growth has slowed. Wages haven’t grown significantly since the 1970s.”

On the other hand: True, wages haven’t grown, if you insist on going all the way back to the 1970s as your base. However, Over the last ten years median real weekly earnings have actually grown from approximately $725 to $800, says Université Laval economics professor Stephen Gordon. “Times were bad in the 80s and 90s, but if you want to talk about the last 10 years, that’s a different story,” he says.

3. What he said: “We know that newcomers are vital to the Canadian economy, and so our government will welcome 300,000 new permanent residents in 2016.”

On the other hand: Morneau’s suggestion that boosting the number of immigrants to 300,000 would boost growth misses the point of how big a demographic gap Canada faces. To reach 300,000 newcomers , the Liberals would only need to welcome an additional 37,900 immigrants compared to 2014, the last full year of the Harper government. This chart shows how small that increase is relative to Canada’s overall population. 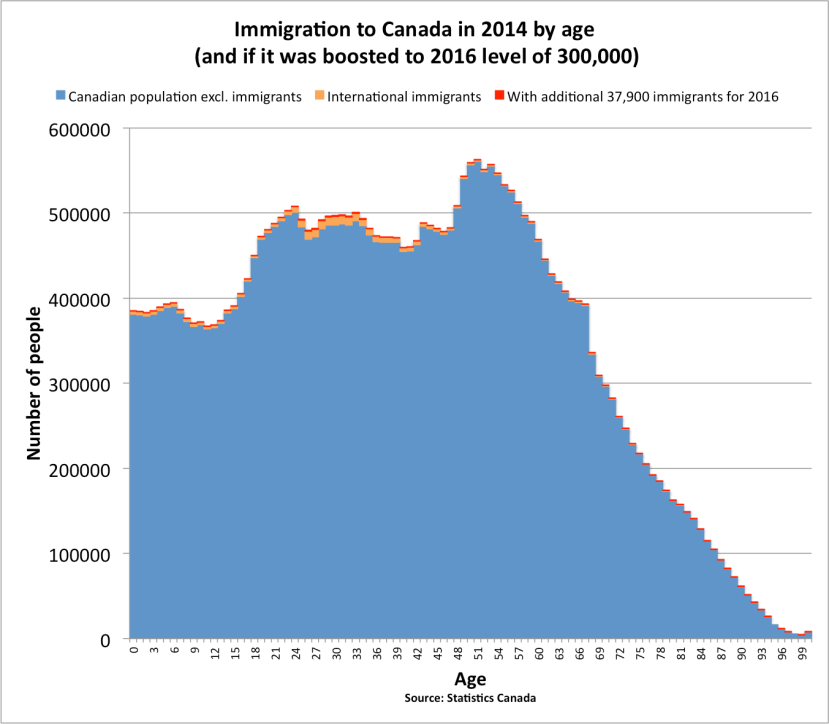 4. What he said: “The Canada Child Benefit is the most significant social policy innovation in a generation.”

On the other hand: “Spending money doesn’t mean innovation,” says Carleton University economics professor Jennifer Robson. “If you have plumbing in your house and open the taps more, does that make you more innovative?”

5. What he said: “The government is committed to renewing the major equipment of the Canadian Armed Forces, including Canada’s aging fleets of CF-18 fighter aircraft and maritime warships. To ensure that funding is available when key capital acquisitions will be made, we will reallocate funding for large-scale capital projects from the 2015–16 to 2020–21 period to future years. This funding is being shifted into future years to align with the timing of major equipment acquisitions.”

On the other hand: In the budget, the Liberals maintain “this is not a reduction in the National Defence’s budget.” However in 2017-18 the government will cut $1.3 billion out of previously committed spending on defence hardware. How is that not a reduction?

6. What he said: “We will put an end to the unconscionable crisis of boil-water advisories on reserves. Our government will invest nearly $2 billion in water and wastewater infrastructure and drinking water monitoring over five years so that every Canadian child has access to clean drinking water, no matter where they live.”

On the other hand: A 2011 government-funded study found it would require $4.7 billion over a ten-year span for drinking water and wastewater systems servicing in First Nations, plus an additional annual operating and maintenance budget of $419 million. Will $2 billion be enough?