Stephen Harper: 'I think the choice before Canadians is a serious choice of two very different directions' 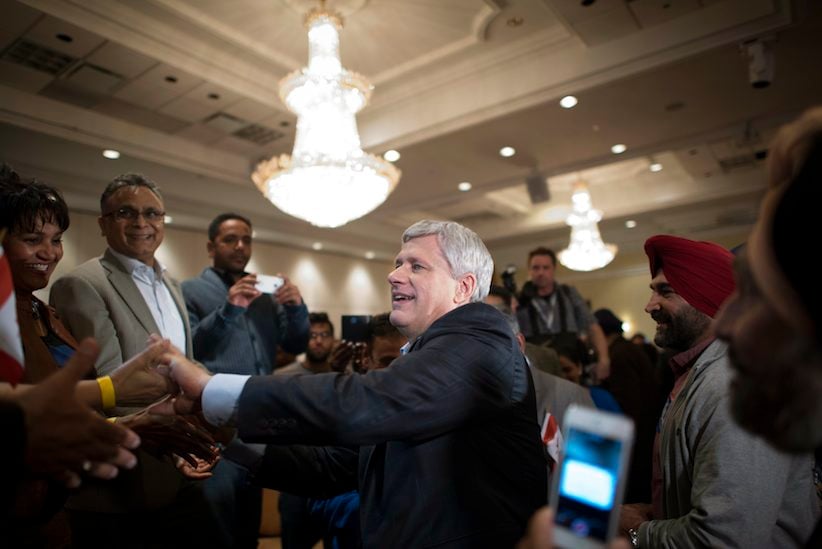 Conservative leader Stephen Harper greets supporters as he arrives for a campaign event in Brampton, Ontario on Wednesday, Oct. 14, 2015. THE CANADIAN PRESS/Jonathan Hayward

BRANTFORD, Ont. — His opponents call it fear mongering, but Stephen Harper says what he’s trying to do in drawing attention to his interpretation of the Liberals’ election platform is present Canadians with the facts.

From a series of ads in the ethnic media saying Justin Trudeau will put brothels in neighbourhoods to a repeated statement they’d cancel pension income splitting for seniors, the Conservatives have come under fire from their opponents this week from engaging in stunts designed to detract from their own record.

Both the ads and Wednesday’s event, highlighting the potential influence of a Liberal government on the pocketbooks of a senior couple, are what Canadians need to know about what’s at stake come Monday, Harper said at a campaign event in Brantford, Ont.

“I think the choice before Canadians is a serious choice of two very different directions for the country,” he said.

“The other guys will claim it’s fear when all we are trying to do is draw attention to facts, facts that they are actually not willing to talk about. You know, they run a campaign on three or four slogans. I think it’s time that Canadians, as we approach election day, look at the platforms.”

The Liberals accuse the Conservatives of playing with those facts. Nowhere in their platform is there a pledge to create brothels, nor as Harper claimed Wednesday, will the Liberals definitely cancel pension income splitting for seniors.

The Conservatives base the brothel assertion on the fact the Liberals voted against the Conservatives’ law that criminalizes the buying of sex, a law passed in response to a Supreme Court ruling that prior anti-prostitution laws violated the Charter of Rights and Freedoms.

The Conservatives say that because doing nothing in response to that ruling would have legalized prostitution, and because Trudeau did not propose a law of his own, he de facto supports legalizing prostitution.

On pension income splitting, Trudeau has repeatedly said that’s not on the table amidst all the other potential repeals a Liberal government may do of previous Conservative policies.

The Conservatives argue that statement is based in part on the Liberals 2007 vote against pension income splitting, which was a policy buried in an omnibus budget bill the Liberals voted down, and that they’re going to have to find the money for their promises from somewhere.

“Stephen Harper is desperate to change the channel from his 10 failed years,” the Liberal campaign said in a statement.

“It’s the only reason he’s playing the politics of fear and spreading falsehoods about the Liberal plan.”

Among the other issues Harper is pushing is that the Liberals would allow marijuana to be sold in corner stores; while that party has said it wants to legalize the drug, the specifics have not been determined.

The Conservatives are vehemently opposed to legalizing marijuana, so some eyebrows were raised Wednesday when Doug Ford, the former Toronto city councillor who has admitted smoking marijuana, let it be known he was going to be organizing a rally for Harper later this week.

It follows comments from Ford at an event in west-end Toronto that he could easily rally thousands of people for Harper. Ford’s brother Rob admitted to smoking crack cocaine while he served as Toronto’s mayor.

Harper didn’t address the seeming juxtaposition of his campaign getting support from two admitted drug users.

“I think our position on these issues is very well-known and the support we’ve had from those individuals for our party is long-standing,” he said.

At least one attendee at the event wasn’t fazed by the Conservative association with the Fords, noting they’d both come clean about their drug use and what mattered was a politician’s fiscal approach.

“I don’t care if anyone has sex with a sheep, as long as you work for the people and increase the livelihood of the people you represent,” said a man who only gave his first name as Richard.

Harper was campaigning in the heart of southwestern Ontario, where the Conservatives are still considered front-runners in some of the more rural ridings despite a concerted push by the NDP and the Liberals.

Later Wednesday he returned to the Toronto area for a rally in Brampton, Ont., a city with a large South Asian population.

Punjabi papers in that community have also been the recipient of Conservative party ads about Trudeau’s policies on drugs, prostitution and safe injection sites.

The Conservatives position the issues as value questions, an effort to keep some in ethnic communities from going back to casting a ballot for the Liberals like many did for decades before the Conservatives stepped up their ethnic outreach game.

“New Canadians from India, from South Asia, have also found this Conservative government respects your values,” Harper said Wednesday night at an event organized by the Canada India Friendship Group, before going on to repeat his government’s promise not to legalize marijuana or permit safe injection sites in neighbourhoods

“And while they may support it, our Conservative party will not support the legalization of prostitution,” he said, to applause.

Harper leaves the Toronto area Thursday morning for a rally in Quebec.