As the building closes for renovations, Paul Wells looks back at what there is to love about the place and the events that left their mark on it 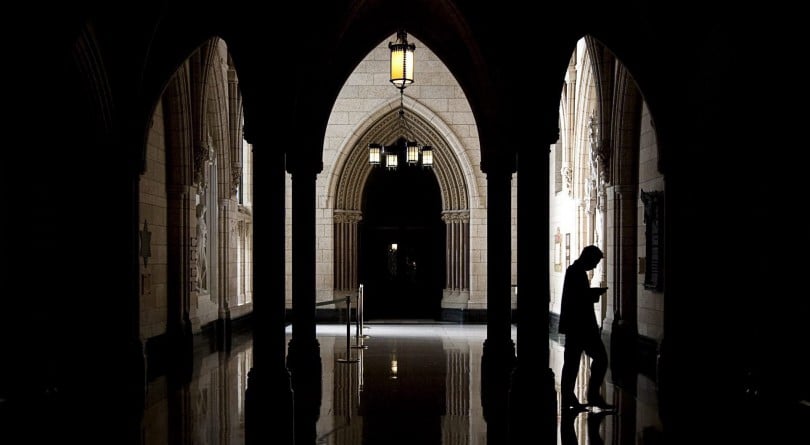 A person walks through the halls of the centre block on Parliament Hill in Ottawa on Wednesday Sept. 22, 2010. (THE CANADIAN PRESS/Sean Kilpatrick)

Sometime in the next few days the Centre Block of Parliament will close for renovations, and by the time it reopens I will probably be retired. Like thousands of Parliament Hill denizens and tens of thousands more across the country, I am left with memories. Here are a few.

When I got to Ottawa in 1994, with one suit and two ties, I was shown the intricacies of Parliament’s Centre Block by Terrance Wills, my bureau chief at what was then the Montreal Gazette’s three-man bureau. Terry had first been posted to Ottawa in 1968, in Lester Pearson’s last days as prime minister, and he seemed to me to have been carved from the same Tyndall limestone from which the the Centre Block itself is made, although I see now that he was only four years older then than I am today.

Terry showed me the intricacies of the Centre Block. It actually does not have many intricacies. Its carvings and ornaments are beautiful. They make a building that, for the most part, is not yet even a century old seem much older. But in layout it is a plain building whose public business takes place, for the most part, in only a few venues: the House of Commons; the foyer outside, where scrums take place after Question Period; the plush and crimson-plumed Senate; two big committee rooms on either side of the vault-roofed and breathtaking Hall of Honour. The important hallways, staircases and back passages connecting these venues could be learned, for the most part, in a day. Terry took great pleasure walking me through the trade routes.

Learning to navigate them for purposes of journalism took longer. In my first week Terry sent me to the scrums after Question Period to get a quote from Michel Dupuy, who was Jean Chrétien’s Minister of Canadian Heritage, and who already wore the haunted look of a man who had figured out that whatever he was meant to do in this world, politics wasn’t it.

Dupuy had spoken to the CRTC on behalf of a constituent, which was a no-no, and the opposition was trying to have his head. A career diplomat and novelist, he was too gentle a soul for the mess he’d gotten himself into. So, on this day, was I: I have never been gifted at shouting over colleagues in a scrum, and I returned to the Gazette bureau without a quote from the minister. Terry made it clear that this was not the right answer. “If we need a quote, you need to get a quote,” he told me. I worked hard to develop thicker skin fast. Dupuy didn’t bother. He did not run for re-election in 1997. I see he published a new novel only this spring. He’s 88.

In those days the Commons was more loosely choreographed by party leaders’ offices than today. MPs were normally sent into debate with only their wits to accompany them. The upstart Reform Party would fill hours of debating time by sending Ken Epp, a gentle and gregarious college math instructor from Edmonton, to talk himself hoarse. Epp was normally delighted to do this, speaking on any topic with minimal preparation and vast patience.

On Dec. 13, 1994, to pick a representative example at random, Epp rose to speak on his own amendment to a routine housekeeping bill in the Public Works portfolio. He could as easily have been addressing war in Asia or the threat of pest infestations in crops. “Mr. Speaker, I have some statements which are relevant to the amendment,” he said. “I do not know if you noticed, but I think I was very close to being on topic speaking about the four points of my amendment one by one. I was very careful to do that.”

Some time later he said, “With respect to the amendment to my motion that says ‘where possible’, I do not know how to say this in such a way that it does not come out wrong. I am going to try very hard to do that.” And then, some considerable time after that, he said, “In the spirit of Christmas, if I may quote the hon. member for St. Boniface, in the spirit of gentleness let us get together on this and let us vote in favour of the motion but let us leave those words in so that the Liberals can feel comfortable voting for it.” I know he said this because since very shortly after Confederation, diligent stenographic teams have written and published every word spoken in the Commons, without regard to their importance.

On some days, Epp would be in tears by the time he sat down after one of these speeches. It would not always be clear why he felt so strongly. But on balance it’s better to be driven to tears by the affairs of the nation than to be indifferent to them, and usually when I think of Ken Epp, I miss him.

It’s common to decry the pedestrian nature of much parliamentary debate, but there were enough days when the women and men who worked there seemed determined to rise to the challenge of the place. Some came packing unfair advantage. Allan Rock, a blue-chip Toronto trial lawyer who came to Ottawa as one of Chrétien’s star recruits, was often so eloquent he seemed hardly to be from the same country as the rest of us galoots. When he was justice minister he would improvise long sentences that put a listener on the edge of his seat, wondering how this elaborate rhetorical construct could possibly end, yet also knowing the subject would lead to the predicate as inexorably as the Upper Jurassic had given way to the Lower Cretaceous.

Rock also knew his limits. Once after a caucus meeting I buttonholed him and asked some obscure question about his portfolio at the time, health, on a topic that could only interest my readers in Montreal. Rock paused to pry open the rings in a black loose-leaf binder he was carrying. He pulled out two pages of text and handed them to me. “Here’s what it says in my briefing book on that,” he said. “This is what I’m supposed to think. I can’t make head or tail of it. If you can figure out what it means, you’re welcome to it.”

A distant successor of Rock’s in the health portfolio is Jane Philpott, who was health minister for the first year and a half of her still-brief parliamentary career. Like Rock and unlike Dupuy, she seems to have been made ready for this life by the life she led before politics. In a committee meeting in the cavernous Railway Committee Room, to the right off the Hall of Honour, I watched her parry questions from a politely antagonistic MP with a grace and patience that few of us bring to anything we try to do in life. Being good at politics is no guarantee of being right, and less assurance of winning, but it is not entirely unrelated to being good more generally, and it is always a pleasure to watch.

The hallway leading from the Senate to the House of Commons is decorated, at the Commons end, with portraits of the prime ministers who’ve served during the lifetime of most Canadians now living. Diefenbaker, towering and granitic. Pearson, ostentatiously modest in an armchair. Pierre Trudeau in a borrowed cloak. Joe Clark, who took a while to get his portrait done because, I have always believed, he hoped he would be prime minister again but who finally presided over the unveiling of a graceful portrait that showed him boyish and eager in the place he loved most: on his feet in the House of Commons, making a point in debate.

From minute to minute it has not always been clear what there is to love about the place. Its proceedings are almost always mulishly routine. Too many of its occupants seem diminished, not inspired, by their awesome surroundings. But the great and terrible events of a century have left their mark on this building, and everyone whose life took them through its doors has paused this week to share a thought: It’s an honour to have been there.