Rex Tillerson's firing as U.S. secretary of state is a heavy blow for Canada's foreign minister, who worked in step with him on North Korea and Russia 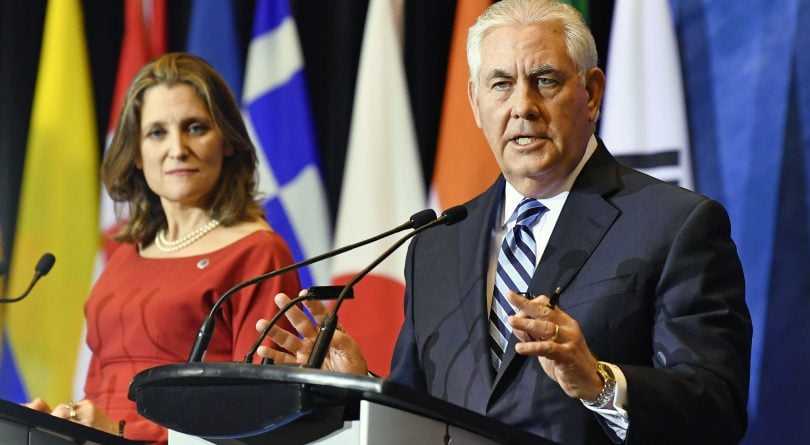 Foreign Minister Chrystia Freeland and U.S. Secretary of State Rex Tillerson hold a joint press conference after their talks in Vancouver on Jan. 16, 2018. (Photo by Kyodo News via Getty Images)

Everything is flux and adaptation. Nothing is forever. As Harry Truman is thought to have said, “If you want a friend in Washington, get a dog.” (He probably never said it, because he wasn’t fond of dogs.)

So there’s every reason to believe Chrystia Freeland, Canada’s resourceful foreign minister, will find other ways to advance Canada’s interests now that Rex Tillerson has been discarded as Donald Trump’s secretary of state. But it’s a heavy blow, because Freeland leaned heavily on her working relationship with Tillerson to get things done.

Consider two cases, one as high-profile as they get, the other less often reported. The less prominent story is the continuing attempt by the U.S., Canada and other allies, including Sweden, to prepare for an international peacekeeping force along the border between Russia and Ukraine. In researching a story about that diplomatic long shot, I was told that whenever Tillerson and Freeland crossed paths, they generally spent a half hour talking about Russia’s continuing invasion of Ukraine.

Ukraine is an example of the policy autonomy that Freeland enjoys and Tillerson, well, seemed to enjoy until today. Trump’s relationship with Russia, and his former campaign chair Paul Manafort’s relationship with the pro-Moscow regime of former Ukrainian president Viktor Yanukovych, are at the centre of special counsel Robert Mueller’s investigation into Trump.

To say the least, Trump’s eagerness to contain Russian aggression is intermittent. Tillerson’s wasn’t, and his handpicked envoy to the region, Kurt Volker, has delivered a consistent carrot-and-stick message to Vladimir Putin’s government: sanctions will continue until the Russian invasion of Eastern Ukraine is rolled back, but a multinational peacekeeping presence along the international border is available as a face-saving measure anytime Putin wants to abandon his Ukraine adventure. Like I said, a long shot, but the message has been consistent from, ahem, Tillerson’s level on down.

The higher-profile file Tillerson and Freeland worked closely on has been, of course, the attempts to contain a nuclear and belligerent North Korea. In a dramatic mid-afternoon address to State Department staff on Tuesday, after Trump fired him, Tillerson mentioned his “maximum pressure” campaign against North Korea as the work that made him proudest during his year and change at Foggy Bottom.

A key moment in that campaign came two months ago in Vancouver, when Tillerson and Freeland played co-hosts to an international summit on the threat from North Korea. Here again, Tillerson was acting on his own more than as Trump’s emissary, and here again, Freeland was acting with almost unparalleled autonomy within the Trudeau government. (It is instructive, for instance, to try to imagine Freeland’s predecessor Stéphane Dion organizing such a conference. For all his qualities, I can’t.)

Tillerson was often characterized as the North Korea softie in the Trump administration. Usually the guy characterizing him that way was Trump. And it’s clear that Tillerson was much more interested in talking his way out of the nuclear-tipped threat from Pyongyang than Trump was. But Tillerson was hardly a peace-in-our-time capitulator.

The goal of the Vancouver summit was to ratchet up pressure against Kim Jong-un, through harsher sanctions and clear statements, from the foreign ministers of 20 nations, to the effect that the upcoming Winter Olympics would not be an opportunity for an unearned thaw in relations between Pyongyang and the rest of the world. That’s why Freeland was so visibly pleased when South Korea’s foreign minister, Kang Kyung-Wha, took the same tough line as her counterparts from the U.S., Japan and Great Britain.

But sometimes maximum pressure is best achieved by adding a tantalizing promise of a way out. This was the “four nos” first enumerated by South Korean president Moon Jae-in during a Washington visit last June. Tillerson repeated the guarantees a month later, and at the Vancouver summit’s closing communiqué repeated them again.

I have no idea what’s led to Kim’s reported request for a talk with Trump, but on paper the four nos seem damned clever. They amount to a renunciation of any hidden agenda behind the West’s demand for a nuclear-free North Korea. As Tillerson put it last August, “We do not seek a regime change, we do not seek a collapse of the regime, we do not seek an accelerated reunification of the peninsula, we do not seek an excuse to send our military north of the 38th Parallel.”

It’s natural for dictators to assume weakness would be exploited by a meddling United States seeking regime change. That’s been true often enough in the past. (George W. Bush’s second inaugural address, delivered when it was still possible to be giddily optimistic about progress in Iraq, mentioned “freedom” 27 times.) Maybe it should always be true. But it’s sometimes not helpful, because it leads a dictator to react the way people sometimes do when cornered.

Tillerson’s “maximum pressure campaign,” paired with Moon and Tillerson’s four nos, were designed to make denuclearization seem the least risky choice for Kim. “We are trying to convey to the North Koreans: ‘We are not your enemy, we are not your threat,’ ” Tillerson said last year, in words he and Freeland would echo in Vancouver. “‘But you are presenting an unacceptable threat to us, and we have to respond.’ ”

Of course political calculation, beyond mere personal affinity, has driven the Freeland-Tillerson relationship. Having a personable Canadian by his side has helped Tillerson launder his actions in ways that might make them more palatable with audiences around the world that were already allergic to U.S. unilateralism even before Donald Trump became its face. And having a gruff Texas oilman backing her up gave Freeland a massive force amplifier. Nor is Tillerson anyone’s hero: the State Department has been chronically understaffed since he became its principal tenant, and his positions on a range of issues have been hard to reconcile with even those of a relative hawk like Freeland.

She will get along without him, partly because she must, but partly also because she is a networker by nature. The minister is in Washington for two days this week, meeting U.S. Trade Representative Robert Lighthizer, Commerce Secretary Wilbur Ross, House Ways and Means Committee Chair Kevin Brady, and Senate Finance Committee Chair Orrin Hatch. This minister tends to get her calls returned. But her relationship with Lighthizer is tense, and nobody on her appointment list this week, or anyone else in Washington, has the kind of close and consistent working relationship she had with Tillerson. This loss will hurt.