Paul Wells: At some point Trudeau abandoned his China ambitions. The former ambassador—and many others—seemed unaware that times have changed. 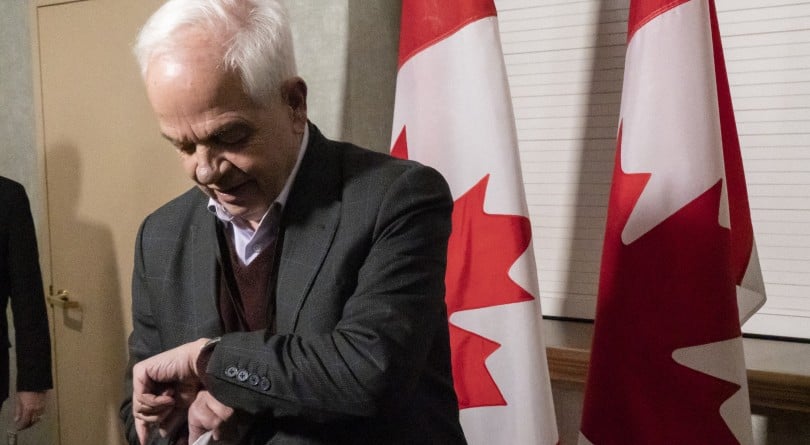 McCallum checks his watch as he arrives for a cabinet meeting in Sherbrooke, Que., Wednesday, Jan. 16, 2019. (THE CANADIAN PRESS/Paul Chiasson)

So, funny thing. On Jan. 9 I spotted John McCallum’s distinctive mug in a photo posted on an Ottawa-based social media account. There being a lot happening on the China front, I sent him an email: “You in town? Wanna have coffee?”

He replied the next morning. “You’re right. I’m in town for a bit more, but much as I generally like talking to journalists in general and you in particular, I’m afraid I can’t do so now.”

He may now wish he had stuck to that policy. On Saturday Prime Minister Justin Trudeau announced he had sought and received McCallum’s resignation as Canada’s ambassador to the court of Xi Jinping. In characteristic fashion, Trudeau offered no public explanation for the call, loading up his news release with a greatest-hits reminiscence of McCallum’s (genuinely impressive) past accomplishments. I honestly think that on most days it doesn’t occur to this Prime Minister that one of his options is to explain to Canadians what’s going on. The assumption appears to be that they can call Gerry.

Did McCallum say the wrong thing? Did he say the right thing too clearly? Was he way off message? What should the proper message have been? We can guess, and guessing is fun, but it leads to some unflattering surmises.

McCallum’s first step was to summon Chinese-language journalists on Tuesday to explain all the reasons Huawei executive Meng Wanzhou should be able to beat the extradition warrant that has kicked off the worst month in Chinese-Canadian relations since the aftermath of the Tiananmen Square massacre.

Two days later, on Thursday, after his comments made their way to English-speaking news organizations and tremendous uproar ensued, McCallum put out a statement claiming he “misspoke” at, er, epic length. Then on Friday he apparently misspoke again, telling a reporter with a recording device it would be “great for Canada” if the U.S. dropped the extradition request.

And so McCallum, a shy and gentle man whose wife and three daughters-in-law are all Chinese, finally ran out of misspeaking room. He will, one assumes, be moving home to retire. The exact nature of his gaffes will have to await his memoirs.

They sure look like they could be Kinsley gaffes, named for the former New Republic editor Michael Kinsley who once wrote, “a gaffe is when a politician tells the truth.” It’s absolutely true that Meng might get her extradition thrown out of court, for the reasons McCallum enumerated; and at least plausible that if the U.S. simply stopped asking for her to be sent there, China’s wrath against Canada might be appeased. Although lately that last one seems like more of a long shot.

But both statements match poorly with the Trudeau government’s stubborn insistence that no part of the Meng arrest and eventual extradition is driven by politics, that Canada is a rule-of-law country and that police and courts do their thing here without back-seat driving by politicians.

So, again, was McCallum freelancing—or did he get caught delivering what was supposed to be an official but sub rosa countermelody to the official line?

Look, it beats me. And to some extent, if this government can’t begin to make its thinking remotely clear on the crisis that has swiftly replaced whither-NAFTA as the biggest international headache on its table, I’m not inclined to help it do the explaining.

Certainly, as I’ve noted here recently, the Trudeau crew has been receiving all kinds of blue-chip external advice to the effect that the Meng affair should have been avoided and can’t go away soon enough. This was the long-standing way of things in Canada: an unspoken equivalent of the semi-official New Zealand “no surprises” policy, which held that China was so crucial to New Zealand’s economic future that nobody associated with the New Zealand government must say or do anything that might offend Beijing. I thought, and still hope, that the Trudeau government has at last instituted a clean break from that craven policy, understanding that the benefits of such institutionalized pre-emptive surrender are too tenuous, the moral and democratic costs too heavy.

If I’m right that Trudeau and his refreshingly old-fashioned foreign minister Chrystia Freeland have decided that buying peace isn’t always worth the cost, then McCallum really has been misspeaking. If so, it’s not so much that he’s been using the wrong verb tense or adjectival clause, but the wrong year. McCallum went to Beijing at the beginning of 2017. By the end of 2017, many of Trudeau’s fondest hopes about China were no longer tenable, if they ever were.

“My slogan is more, more, more,” McCallum told the Toronto Star upon his arrival as the new ambassador two years ago. “We want to do more trade, more investment, more tourists.” Soon teams of Canadian and Chinese negotiators would start meeting, by turns in Beijing and Ottawa, to scope out a trade deal. The problem was that the Chinese wanted to deliver an off-the-rack deal that would give China all the advantage. The Canadians had no mandate to accept such a deal, the Chinese no mandate to offer better.

Justin Trudeau ended 2017 by flying to Beijing in chinos to see whether he could do better. Honestly, I still like that he tried. He got absolutely nowhere. As Jonathan Manthorpe points out in his superb new book about Canada-China relations, Claws of the Panda, Canada was China’s fourth-largest trading partner in 1970 and its 21st-largest partner by 2016. Beijing is one of many places in the world where Canadians impress mostly themselves.

At some point, Trudeau abandoned his dream of making China the motor of Canadian economic renewal, although characteristically, he has never said when that happened. McCallum remained a castaway on the island of early 2017’s assumptions, unaware that times had changed. He has plenty of company.

Two final thoughts, on McCallum and then on Trudeau. In the aftermath of the Meech Lake constitutional deal’s collapse in 1990, I spent two years as a cub reporter covering weekend conferences in a succession of Montreal hotels on Canada’s constitutional future. John McCallum, then an academic (not yet a bank economist as I wrote here first) and always a man who took national unity seriously, was at just about all of those conferences, along with Claude Ryan, Hugh Segal, Bob Rae—the unity tribes. McCallum has wanted the best for this country since long before he ran for office, and there’s basically nobody in Canadian public life who doesn’t like him. His contributions far outweigh his indelicacies.

Of the Prime Minister, perhaps it is enough to say this: somehow this Huawei arrest and extradition has turned into a hostage crisis, and it’s fair that those circumstances constrain what Trudeau and his government can say in public. A speedy resolution is what everyone wants. But at some point, the crisis will pass and the questions will remain. Maybe one day the government could get around to answering a few.

What are Canada’s trade ambitions with China? If those ambitions have changed since the 2015 election, when did they change and why? Does the government of Canada believe there is such a thing as Chinese private enterprise? Does it believe trade with China liberalizes China, or that it corrupts Canada?

It will soon be two years since Freeland gave a speech to the House of Commons on Canada’s foreign-policy priorities. Does anyone believe she would have less to talk about, if she gave another such speech today?