Paul Wells: Liberals are coming to terms with the realization that COVID-19 didn't cancel gravity, and that 'building back better' will, in fact, be hard work 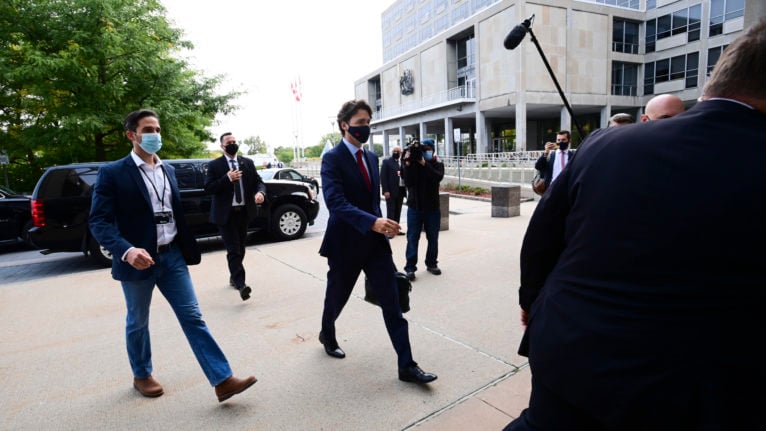 Trudeau arrives on the second day of the Liberal cabinet retreat in Ottawa on Sept. 15, 2020 (CP/Sean Kilpatrick)

I’m grateful to the excellent Toronto Star columnist Heather Scoffield for noticing some fascinating comments Gerald Butts made on Monday.

Butts, of course, resigned in 2019 as Justin Trudeau’s principal secretary and has been working since then as a consultant, climate-policy opinion leader and Twitter scold. He was a member of the Task Force for a Resilient Recovery, which spent the summer pushing hard on the “build back better” rhetoric that imagined the coronavirus pandemic as the dawn of a bold new green-energy future.

To say the least, excitement about a pandemic is counterintuitive. I started writing about the contradictions in June, when nameless Liberals were telling reporters, “It’ll be a good time to be a progressive government… There are a lot of us who are dreaming big.” I came back to the theme in August, when the PMO was setting Bill Morneau up as some kind of obstacle to their plans to “build back better.” And I wrote last week about the unsettling spectacle of Trudeau greeting Morneau’s departure as, essentially, the end of history: “We can choose to embrace bold new solutions to the challenges we face and refuse to be held back by old ways of thinking. As much as this pandemic is an unexpected challenge, it is also an unprecedented opportunity.”

It was already clear last week that some of these considerations were starting to weigh, perhaps belatedly, on the Prime Minister and his advisors. “There’s a sensitivity to being perceived to hijack the moment for a green recovery,” a senior Liberal source told the CBC’s David Cochrane. Boy, I sure hope there is.

Along comes Butts, who on Monday was addressing something called the Recovery Summit, an ambitious online virtual conference organized by some of the usual suspects, including the (Trudeauist) Canada2020 think tank in Ottawa and the (Clintonist) Center for American Progress in Washington.

Butts kicked off the proceedings by pouring industrial quantities of cold water on everyone.

It’s important to “understand and appreciate the level of anxiety that people are going through right now,” he said. Conferences like this one were made by and for members of the “progressive movement,” he said. But in a clear warning to people who consider themselves members of that movement, he added, “We depend on the support of the broad middle class and regular people. When we keep that support we form governments. And when we don’t, we lose governments.”

In an even clearer warning against the weird self-celebratory tone of some of the rhetoric from the government over the summer, he added: “It’s really important to emphasize what we’re doing and whom we’re doing it for—rather than celebrate the fact that we are doing it.”

I haven’t spoken to Butts since a few months before the SNC-Lavalin controversy wrecked his career in government, and I doubt he minds at all. So it was odd to hear him sounding warnings that resembled things I’ve been writing for months. It’s pure coincidence. It simply reflects the fact that to anyone with any distance from the government echo chamber, the Trudeau circle’s weirdly giddy triumphalism of recent months has got to sound jarring.

“To put it diplomatically, I think that in any crisis situation, people will repurpose their pet projects as urgent and necessary responses to the crisis at hand,” Butts said. “And it’s vitally important that, when people are feeling as anxious as they’re feeling right now, we start the solutions from where they are and build up from there. And not arrive in the middle of their anxiety with a pre-existing solution that was developed and determined before the crisis that’s arisen.”

I know there’s a widespread assumption that Butts never really left the Trudeau circle, that he remains the PM’s puppeteer. I think that’s farcical. Butts probably has an easier time getting Ben Chin to return a call than some of my colleagues do, but for the most part he’s basically a sympathetic outsider who’s watching the work of friends from a distance. His remarks amplify and consolidate things Dave Cochrane was already hearing from senior Liberals last week. Liberals are coming to terms with the realization that COVID-19 didn’t cancel gravity or smite the foes of progress, as they define progress, from the earth. When Parliament returns next week, it will still be a venue of measurable personal risk for its occupants, like any large room for the foreseeable future. It will still contain more MPs who aren’t Liberals than MPs who are. It will be watched by a population that is worried, defensive, and incapable of ignoring risk for the sake of a resounding slogan. It speaks well of the Liberals that they have spent the summer working some goofy rhetoric out of their systems before returning to the real world.

This doesn’t mean the government shouldn’t pursue reductions in carbon emissions. They ran on promises to do so. They set ambitious targets, having spectacularly missed easier targets in the past. They faced concerted opposition and won. Working to reduce carbon emissions is necessary work with broad public support.

But it will be work. The clear implication of the “dreaming big” and “unprecedented opportunity” talk was that Liberals, including the Prime Minister, were talking themselves into believing school was out. That a global calamity would somehow transform hard work into a party, disarm the political opposition and, once again—this is a particularly sturdy fantasy of life in Trudeau-land, as Jane Philpott and Bill Morneau could tell you—delegitimize internal dissent.

It isn’t so. Meeting the Liberals’ own climate goals will be hard work that will feel like hard work, if they care to take it up. The necessary changes will impose costs that will feel like costs before they provide benefits that feel like benefits. The very nature of this crisis will make “building back better” anything but a cakewalk.

First, because 2020 hasn’t wiped out the former world. “Building back better” became a slogan a decade ago after earthquakes in New Zealand erased a lot of existing infrastructure. COVID-19 has been more like a neutron bomb, interrupting livelihoods but leaving neighbourhoods intact. If I had to build a new rail link from scratch between Toronto and Montreal, I might build something fancy. But the old one is still there. That makes a difference.

Second, because there’s little likelihood of a sustained, long-term recovery like the one that characterized Canada’s economy for 30 years after World War II, a comparison that was briefly fashionable a few months ago with the build-back-better set. The recovery’s likely to be pretty quick, to pick up steam only after a vaccine or effective treatment becomes widespread, and to last only about as long as it takes to return to the status quo ante. It’s fantasy to imagine miracle growth lasting the rest of everyone’s lifetime will take away costs and tradeoffs.

So the Trudeau government’s duty to meet its climate targets remains, and so does just about all the difficulty of meeting them. Which means a central question about this Prime Minister—does he rise to challenges, ever? — also remains.