Deficits won't be as deep as feds predict: budget watchdog 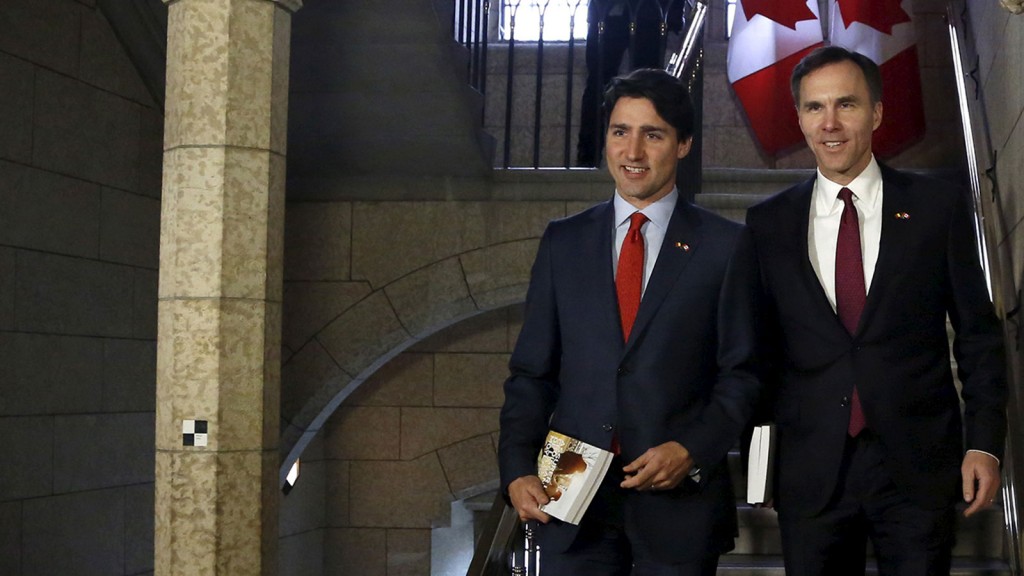 OTTAWA – Canada’s budget watchdog released fiscal predictions Tuesday that suggest the federal government has been overly prudent in its projections.

A new report by the parliamentary budget office said the federal books are on track to add a total of $90.8 billion to the public debt over the next half-decade — lower than the federal government’s projection of $113.2 billion over the same period.

The analysis also challenges the Liberal government’s estimate of a shortfall for 2015-16, saying Ottawa will instead have a $700-million surplus in 2015-16, rather than the projected $5.4-billion deficit.

Critics say the Liberals have deliberately lowered their fiscal outlook by including larger-than-usual risk adjustments of $6 billion per year in order to help the government beat expectations down the road.

Earlier this month, the parliamentary budget office called the Liberals’ adjustment “excessive” and said it eroded the independence of government’s traditional practice of basing its projections on an average of private-sector economic forecasts.

On Tuesday, the PBO again questioned the need for the government to use such a big cushion in its predictions.

“PBO’s forecast of the budgetary balance is $4.5 billion higher than budget 2016, on average, over the outlook,” the document said.

“The average difference is roughly in line with the budget 2016 planning adjustment.”

For example, the budget office is expecting Ottawa to show a $20.5-billion deficit this year, $8.9 billion smaller than the Liberal government’s $29.4-billion prediction.

Conservative interim leader Rona Ambrose crowed about the report during question period, citing it as evidence that Liberal claims of an inherited Conservative deficit are little more than political fiction.

“Today, (the parliamentary budget officer) confirmed two more things: first, the Liberal budget does not add up, and second, good news — Conservatives did leave a surplus,” Ambrose said as the Tory benches hollered their approval.

Finance Minister Bill Morneau defended his budgetary prudence as a necessary hedge against forecasters, who have been known to be wrong in recent years.

“We want to make sure that Canadians understand that we’re being prudent as we come up with estimates of how the economy will do — that’s the starting point,” Morneau said Tuesday when asked about the criticism.

“We were pleased that the parliamentary budget officer concluded that our investments are going to make a difference in growth to the economy.”

The report also estimated the cost of a Liberal commitment to cancel a Conservative policy that, starting in 2023, would have gradually increased the eligibility age for old age security to 67 from 65.

In introducing the change, the Tories argued the system was unsustainable; the Liberals promised during the campaign to reverse the move.

The PBO says the Liberal reversal will cost the public treasury $11.2 billion in 2029-30 — the first full year after the Tory plan would have been completely phased in.

“Had the age of eligibility change not been reversed, federal debt would be eliminated by 2057-58 — seven years earlier than under the current policy,” said the report, which predicted the debt to be completely paid off by 2064-65.

The budget office said the federal fiscal structure is sustainable over the long term and the debt-to-GDP ratio expected to begin falling in 2017-18.

By comparison, the federal budget predicted real GDP to grow 1.4 per cent in 2016 and 2.2 per cent in 2017 — numbers based on an average of private-sector forecasts.

Last week, the Bank of Canada projected real GDP to expand by 1.7 per cent in 2016, up from its January expectation of 1.4 per cent. The central bank said the rosier prediction was due in part to billions of dollars in fiscal measures announced by Ottawa for projects like infrastructure.