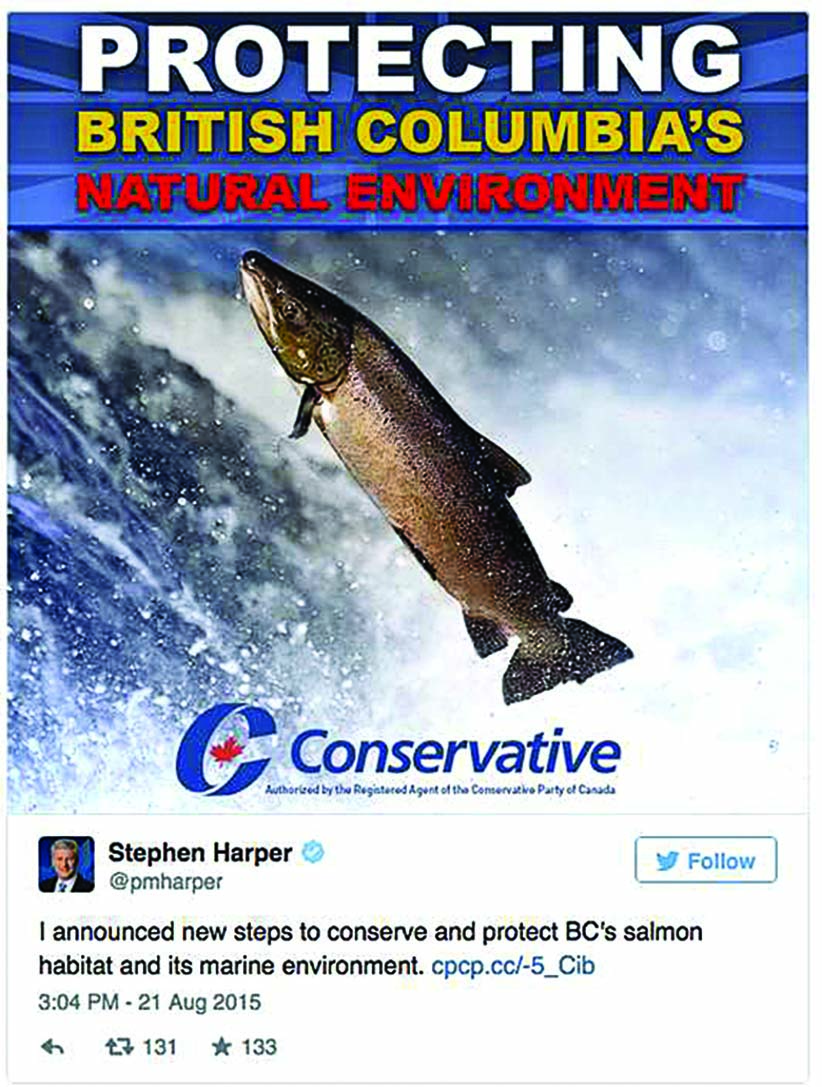 The Conservative party, seeking to burnish its credentials as guardians of the West Coast environment, recently tweeted Prime Minister Stephen Harper’s $15-million pledge to protect the coastal salmon habitat. The tweet included a stirring photo of a leaping salmon under the caption “Protecting British Columbia’s natural environment.” Trouble is, the photo was of an Atlantic salmon, the kind found in B.C. waters only when they escape the fish farms that wild-salmon advocates see as a threat to native species. A correct photo was quickly substituted after the faux pas was spotted with great glee by the Green party, among others, but it reinforced the impression that the Conservatives are more oil than water when it comes to fishing for votes.

In announcing the campaign pledge in Campbell River, a fishing mecca on Vancouver Island, Harper claimed, “Our conservation record shows that you can protect our cherished natural environment while still growing the economy.” On the face of it, Harper would seem to have struck the right balance with his endorsement of such initiatives as the proposed Northern Gateway pipeline that would carry Alberta oil-sands bitumen to the northern B.C. coast. A province-wide survey by Vancouver-based research and polling firm Insights West found just four per cent of respondents ranked energy and pipelines as the most important issue Canada faces. The broader issue of the environment was key for 12 per cent, still 21 points below the top priority of “jobs and the economy,” which Harper claims as high ground. But things are decidedly less secure for Conservatives in coastal ridings where pipelines end and tankers roam.

An Insights West poll in late August showed a significant rise in Green support on Vancouver Island, where party leader Elizabeth May handily won Saanich–Gulf Islands in the last election. While the Greens sit at 12 per cent support across B.C., they’ve risen in three months to 32 per cent from 20 per cent on the island, where concerns about pipeline expansion and resulting increased tanker traffic rank high. The New Democrats lead on the island with 39 per cent, while the Liberals and Conservatives trail with 15 per cent each. “Looking at the numbers on the island, you start to see the trend of it almost becoming its own republic. The two parties who have governed the country for all our lives [Conservatives and Liberals] are where the NDP was 20 years ago,” says Mario Canseco, vice-president of public affairs for Insights.

While the Green vote traditionally fades at the ballot box, its strong island showing presents a conundrum for strategic voters, says Canseco. “Do you vote for the NDP in the hopes of getting a government that is going to be more environmentally friendly? Or do you give your vote to the Greens, and see if a couple of more people on the plane with Elizabeth May from Victoria to Ottawa every couple of weeks will get things going?”

The environment and such concerns as Bill C-51, the Conservatives’ expansive anti-terror law, are triggers that have turned B.C. into a potential hotbed of strategic voting. Two left-leading grassroots organizations, the national group Leadnow and the B.C.-focused Dogwood Initiative, have hired pollsters to drill into voting intentions in battleground ridings between now and election day. The intention of these “non-partisan” groups is to identify candidates with the best chance of beating Conservatives, including those in Vancouver-area ridings lining Burrard Inlet, site of a proposed expansion of the Kinder Morgan petroleum pipeline and tanker terminal.

Tory stalwart Stockwell Day has condemned Dogwood as “an extreme activist group attempting to influence the results of the election.” Dogwood, which campaigns against pipeline expansion and tanker traffic, is indeed trying to influence the vote, says its spokesman, Kai Nagata. The aim is “to increase voter turnout and elect MPs that are actually responsive to, and accountable to, their constituents, whatever colour jersey they are wearing,” he says. “If that’s extreme, then guilty as charged.”