Federal election 2015: When left is right, and the middle is left 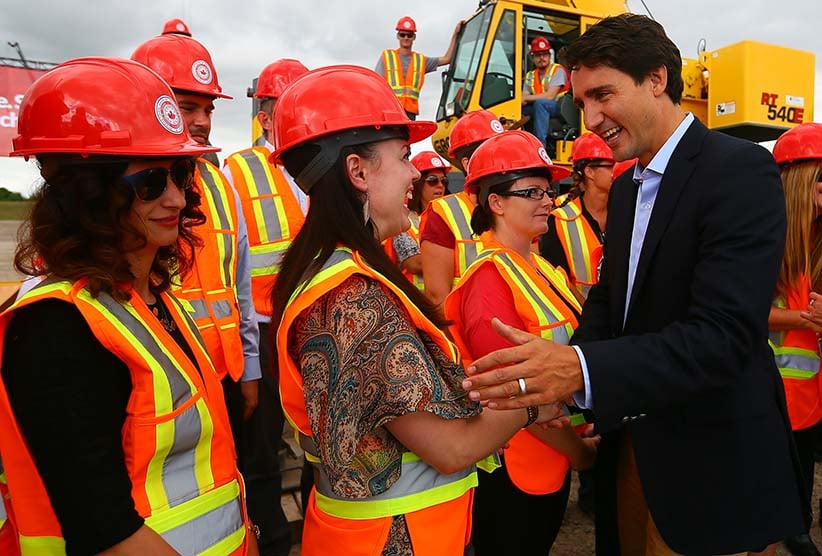 Campaign backdrops don’t often mean much. Coffee shops are where party leaders pretend to be ordinary folks. Suburban backyards are where they signal their solidarity with the coveted middle-class voter. But it was worth taking note of exactly where Justin Trudeau chose to make the most surprising pledge of the 2015 race to date, his announcement last week that a Liberal government would post three years of deficits to pay for a doubling of federal spending on infrastructure such as transit, seniors’ centres and water treatment plants.

Trudeau made his unexpected vow to spill red ink at the headquarters of Local 793 of the International Union of Operating Engineers, located in Oakville, Ont., which bargains for thousands of heavy-equipment operators in the province’s construction industry. And the Liberal leader wasn’t there just to pose for the cameras at the controls of a Manitowoc crawler crane. By staging his campaign-disrupting announcement at a labour-run training facility, Trudeau left no doubt that he means to challenge the traditionally union-allied NDP on its left flank.

Trudeau is trying to jolt Canadian voters out of their deeply ingrained habit of seeing the political spectrum as a simple equation: NDP-Liberal-Conservative equals left-centre-right. He is defying the conventional wisdom that voters identify balanced budgets with good government. NDP Leader Thomas Mulcair’s remarkable climb in the polls since last spring clearly forced the Liberals to make this gamble. Faced with the prospect of fighting a two-front war against Harper on their right and Mulcair on their left, Liberal strategists want to reconfigure the battlefield, pushing their opponents together. “The choice in this election is clear,” Trudeau says. “It’s between jobs and growth or austerity and cuts, and Tom Mulcair just made the wrong choice.”

Trudeau’s charge is that Mulcair has thrown in with Harper by pledging to balance the books. Not surprisingly, the Conservative leader isn’t welcoming Mulcair into the fiscal-restraint camp. “What these guys will do,” Harper said, referring to both Mulcair and Trudeau, “what they will do with spending they cannot finance [is] inevitably raise taxes that will hurt Canadians and kill jobs.”

Pity the undecided voter left to try to sort out such wildly conflicting claims. Would Mulcair be dangerously free-spending, as Harper warns, or heartlessly tight-fisted, as Trudeau charges? No definitive answer is yet possible. With more than six weeks of campaigning left before the Oct. 19 election, Mulcair—like Harper and Trudeau—has plenty of policy left to announce.

Related: Try our Policy Face-Off Machine to see which party you align with

Still, Peter DeVries, a former top federal finance official, now a consultant analyzing fiscal policy, says the promises Mulcair has made so far add up to small surpluses in the first two years of an NDP government, but mounting deficits in later years. “It’s too early in the campaign to say if they are out of line or not out of line,” DeVries says. He’s watching for expected NDP commitments that haven’t yet been announced, on issues such as social housing and Aboriginal programs, to see if their cost makes Mulcair’s pledge to balance the books look plausible.

Brad Lavigne, a top NDP strategist, says any doubt will be erased when the party releases a fully costed platform detailing how it would pay for all its promises, sometime closer to voting day. Already, Lavigne says, a balanced approach should be evident, with NDP spending pledges, such as billions for daycare spaces and infrastructure, offset by billions in tax gains from measures such as cancelling income-splitting for parents with kids and boosting the tax rate on big companies. “The programs Canadians have come to rely on, that they cherish, are put at risk if governments are going to set themselves up for perpetual deficits,” he says.

Lavigne’s message fits with what Abacus Data pollster David Coletto says must be the NDP’s prime objective: reassuring voters uneasy about the prospect of electing a party that has never held national power. In contrast, Trudeau might be betting that memories of the Liberals’ deficit-busting record from the 1990s insulate him from worries about runaway spending. As well, Coletto points out, Trudeau’s strategists may be “taking a play from Kathleen Wynne,” Ontario’s Liberal premier, who won the province’s election last year by running to the NDP’s left. But he offers no pat answers for party strategists wondering which way federal voters are leaning on the issue: Abacus’s most recent poll found 38 per cent of Canadians against deficits, even if the economy is weak, but a virtually equal 37 per cent for deficits if they help stimulate the economy.

If deficit claims and counterclaims remain a defining flashpoint through the rest of the campaign, more pressing issues could be marginalized. After all, most economists shrug at the difference between modest deficits and small surpluses, given that Canada’s accumulated federal debt burden is easily manageable by international standards. Arguably far more important is how well all the new spending plans promised by the parties stand up to expert, independent scrutiny. 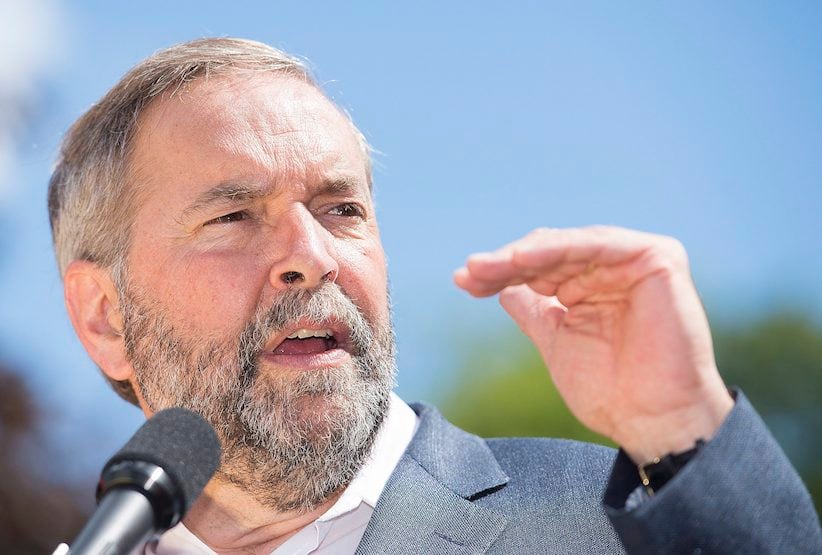 Not much detailed analysis is reaching voters so far. Even Mulcair’s signature child care plan, a centrepiece of his platform, hasn’t yet drawn sustained attention. He pledges to create 370,000 daycare spaces across Canada by 2018-19, at a cost of nearly $1.9 billion a year. But the NDP proposal assumes the provinces will sign on to partner with Ottawa in paying for those spaces. Some provinces, notably Ontario and B.C., have already balked at the notion that they might have to boost their spending to qualify for a share of new federal money.

As well, Mulcair’s plan calls for $15-a-day spaces, inspired by Quebec’s famous $7-a-day model. Yet even Quebec has recently abandoned that flat-price concept. “They’ve moved to a sliding scale based on family income,” says Sunil Johal, policy director of the Mowat Centre think tank at the University of Toronto. “That may be the best of both worlds: Government creates spaces, but if somebody is making $150,000 or $200,000, they should pay more for the service than somebody making $40,000 or $60,000.” Mulcair says he would be flexible in hammering out deals with the premiers. But if the amount of matching provincial funding is far from certain, and the basic fee structure is open to negotiation, then the NDP commitment begins to look like something less than a firm promise.

Just as open to critical analysis are various party pledges to spur economic growth. Harper and Mulcair both promise, for instance, to shave the tax rate on small businesses to nine per cent from 11 per cent. Some leading experts, though, don’t view that as a smart way to spur innovation or job creation. “The main beneficiaries from low taxes for small firms are lawyers, accountants and economic consultants,” says Paul Boothe, director of Western University’s Lawrence National Centre for Policy and Management. Bill Currie, vice-chairman and Americas managing director at the professional services giant Deloitte, says any new federal tax relief for business should reward companies for growing fast, not for merely being small.

Devising simple policies to boost competitiveness that also satisfy economists is no easy matter. A lot has already been tried. Currie says extensive research by Deloitte into Canada’s lagging productivity growth, especially compared with the U.S., has found that Canadian tax rates are already attractive, and direct government support for innovation is generous. “Government isn’t perfect, but it’s working pretty hard at all levels to solve the problem,” he says. “It appears the biggest problem we have is business itself.”

But a politician running for office can hardly stand at a podium and pin the blame for Canada’s economic problems where Currie does: on timid business owners who fail to invest enough in machinery and equipment, research and development. The parties tend to focus on what government can readily do. In the 2015 campaign, that means competing to pledge the most for infrastructure.

Trudeau upped the ante in that race by promising to almost double Ottawa’s infrastructure spending to nearly $125 billion, over 10 years, from about $65 billion, at the pace the Tories have set. Harper defended his record by saying his government has already locked in long-term infrastructure spending at record levels. The NDP, not to be left behind, pledges to boost transfers to municipalities from the gas tax by $1.5 billion a year and spend $1.3 billion a year to support public transit. 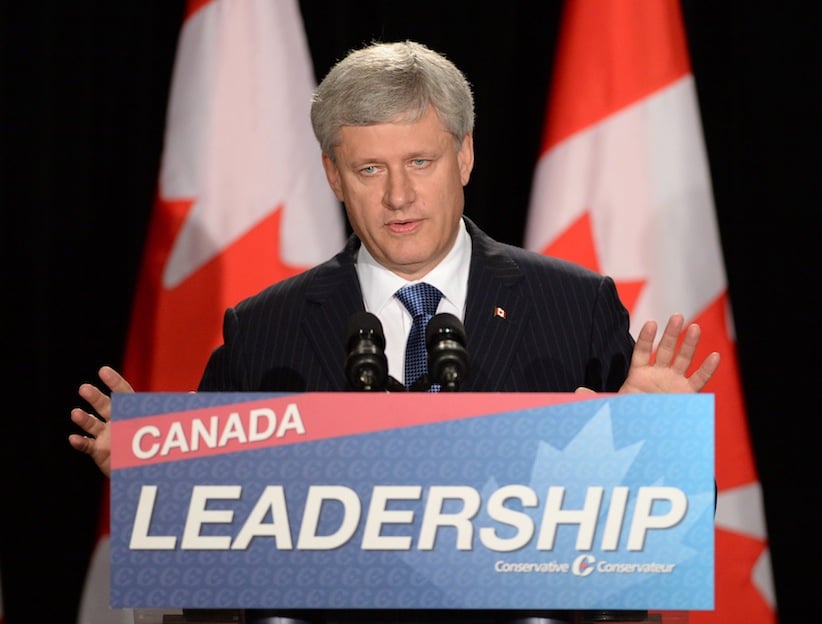 Conservative Leader Stephen Harper makes a campaign stop in Ottawa on Sunday, August 9, 2015. Canadian’s will head to the polls on October 19, 2015. THE CANADIAN PRESS/Sean Kilpatrick

So none of the parties can fairly be accused of ignoring the need to keep construction cranes—such as the one Trudeau tried out last week at Local 793—busy building stuff. When it comes to infrastructure, they’re sparring, not over the priority itself, but how much is enough and what sorts of projects to favour. It will be hard for voters to sort out all the nuances.

Some may be more swayed, ultimately, by policies that directly benefit not industry, but households. Among the big-ticket promises for individuals made so far are: Harper’s home-renovation tax credit, worth $1.5 billion a year; Mulcair’s pledge to increase the Guaranteed Income Supplement for low-income seniors by $400 million; and Trudeau’s cut in the income tax rate on earnings between $44,700 and $89,401, a $3-billion Liberal policy pillar that would be paid for by hiking the tax rate on Canadians earning more than $200,000.

Any conscientious, undecided voter faces a challenge when deciding which policy suite to pick—and there’s much more to come. With even the handy left-, right- and centre-ordering of the parties now tossed out the campaign bus window, this tight three-way race is demanding closer attention than ever from Canadians struggling to settle on a choice.