Federal election 2021: On health care, the song remains the same 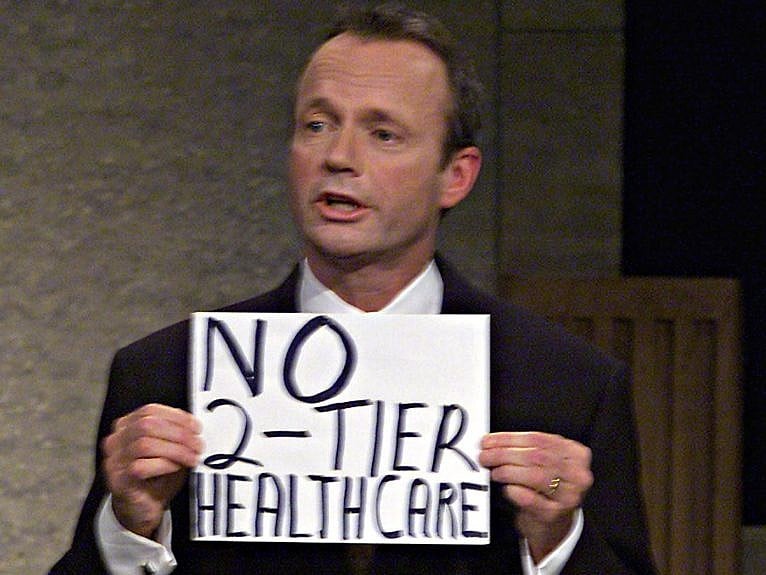 Canadian Alliance Leader Stockwell Day holds up a sign to make a point on national health care during the English leaders' debate on Nov. 9, 2000 (Tom Hanson/CP)

In my dream the faces change but the words never do. I’ve been watching politicians bicker over health-care models for as long as I’ve been covering politics. They do it because it works. It’s one of the oldest stories in the book— “my opponent wants to destroy the health-care system; only I will save it.” Every British election ends this way, and most Canadian elections. Even the odd U.S. election, and especially the very odd ones.

Chrystia Freeland tweeted edited video of Erin O’Toole saying he supports increased private-sector participation within a public health system. Twitter put a “manipulated media” label on the tweet. A “twitter fiasco,” colleagues called it. Surely the worst kind of fiasco. But there was Justin Trudeau in Halifax a day later, doubling down on the accusations. And on every day since. Why does he keep on like that? It’s unseemly. It’s dishonest.

Oh, but on the third day, Nik Nanos rolled away his stone and found the Liberals rebounding nicely, thanks to the NDP in their recurring role as the party whose supporters can reliably be stampeded to the Liberals. (“NDP Voters: We Have the Courage Of Our Convictions, But Feel Free to Borrow Some.”)

Spend enough time covering politics and you eventually deal with weapons-grade déjà vu. I was traveling on the media bus for the short-lived Canadian Alliance party’s campaign during the 2000 election. Stockwell Day was the fledgling party’s leader, trying to to appeal simultaneously to gettable centrists and the party’s rock-ribbed conservative base. Some things never change. One Tuesday morning the Globe and Mail came out, with Shawn McCarthy’s story across the top of Page A1: “Alliance supports two-tier health care.”

It seems Day’s campaign co-chair, a fellow by the name of Jason Kenney, had given the Globe an interview about increased private-sector participation within a public health system. “I don’t think the federal government should dictate what options the provinces have.,” Kenney said. “The federal government should dictate that every Canadian must have access to quality, comprehensive care that is publicly funded and costs nothing to the patient . . . And if the provinces want to experiment with other forms of financing health care, they should be given the flexibility to do so.” This is, nearly verbatim, what Erin O’Toole has been saying all week.

Allan Rock, a smart guy who was the Liberal health minister, knew what to do: rend his garments. This Day-Kenney scheme would be “fatal to our national system of public health care,” Rock intoned. If Ottawa let the provinces run health care, “You are going to lose the national character of this program . . . it will be a patchwork system that is no longer a national enterprise.”

Of course this was claptrap. Then as now, the private-sector participation in the system that Liberals warned against was already happening, and not a little bit of it but a lot, while Liberals governed. None of it contravened the Canada Health Act or compromised care. But the controversy over Day’s words dogged him. Kenney wrote to the Globe to complain bitterly. In the campaign’s only English-language debate, Day held up a hand-lettered NO 2-TIER HEALTH CARE sign (at 2:40 in this video). And while he had never really threatened Jean Chrétien’s lead, that foolish and surreal move in the debate sunk him.

Safely re-elected, the Liberals went back to… celebrating increased private-sector participation within a public health system. “Does corporate structure necessarily matter in terms of a hospital, as long as when I take my Alberta health card, they take that card and my stay in that hospital and the treatment therein is covered by a publicly funded, publicly administered health-care plan?” Excellent question, 2002-era federal Liberal Health Minister Anne McLellan! “I don’t believe the Canada Health Act should be etched in stone,” she added.

Good point! Who believes in etching health acts in stone? Unless there’s an election looming, of course, in which case, start etching. By 2004 Paul Martin was the prime minister, Anne McLellan had been elevated to the position of Deputy Prime Minister, and poor Pierre Pettigrew, her successor in the health portfolio, was foolishly assuming her zestful spirit of innovation and openness to private enterprise was still the preferred attitude. Off he went to testify to the Commons health committee, three weeks before Martin wound up calling an election, apparently still believing he lived in a world of facts and truth.

“If some provinces want to experiment with the private-delivery option, my view is that as long as they respect the single-payer, public payer, we should be examining those efforts,” Pettigrew said cheerfully. Provinces as motors of progress! What could be grander? “If it doesn’t work, they’ll stop it. But if it works, we’ll all learn something.”

The headlines were something else. “Ottawa opens up medicare,” one said.

I’ll let Globe columnist Jane Taber, who was getting updates on insider goings-on from about half the Liberal caucus in those days, tell what happened next. “It was a furious Paul Martin at this week’s caucus meeting,” she wrote. “His face was red; he was gesticulating angrily; and some say he was shouting.”

Pettigrew made himself small, to no avail. “Mr. Martin told his caucus that he had watched his father, Paul Sr., work hard to bring in medicare and wasn’t prepared to stand by and watch it unravel.” Apparently nobody was on hand to tell Martin some obvious things, such as (1) he’d been standing by; and (2) it wasn’t unravelling. Pettigrew was made to march out of the caucus room in the middle of the caucus meeting and tell waiting reporters that he hadn’t said what he had obviously said, or meant what he had obviously meant.

So that’s two decades of Liberals warning, in effect, that only Liberals can be trusted to deliver the kind of health system Conservatives keep promising. It’s sometimes said that only Nixon could go to China. When it comes to health care, the preferred Liberal model is one in which Nixon never leaves China.

Trudeau came to power believing he could turn the page on the old-fashioned politics of fear and division, and I’m pretty sure he believes he has. But the thing about that particular page is, once you turn it, you see that the next page says FEAR AND DIVISION. Four more weeks to go.