Mulcair and Trudeau blamed Harper for the economic mess, as the Tory leader repeated his message that his government is the best bet 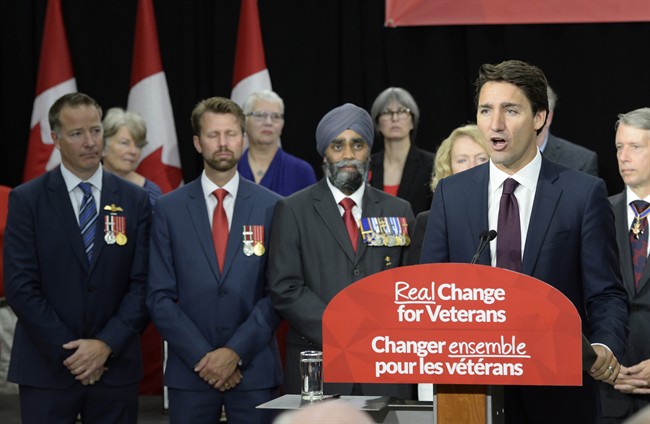 OTTAWA – A precipitous drop in North American stock markets sparked fresh debate on the federal campaign trail Monday about which leader would be the best choice to manage Canada’s finances.

Toronto Stock Exchange dropped more than 700 points shortly after markets opened, before recovering as the day went on. The dollar, meanwhile, was down half a cent.

For Stephen Harper, the plunging economy — fallout from China’s worst market performance in eight years — provided a welcome diversion from the relentless revelations of the Mike Duffy trial that have kept the Conservative campaign off balance for close to two weeks.

NDP Leader Tom Mulcair and Liberal Leader Justin Trudeau blamed Harper for the economic mess, and said they could do a better job of running the country’s finances.

Harper repeated his message that his government is the best bet in uncertain economic times.

That’s a message that the Conservative leader has been struggling to deliver as he fends off questions about how much his current chief of staff, Ray Novak, knew about Nigel Wright’s controversial $90,000 payout to Duffy in February 2013.

Harper said Monday the “unstable global economy” is the most important issue facing Canadians, and urged them to stick with his party.

“Given the challenges around us, we need to stick with a long-term plan that has been working and will work,” Harper said in Drummondville, Que.

Harper, meanwhile, said his political opponents were offering proposals that would damage the economy.

“What the other guys are proposing, at a time of enormous market instability, is that they would embark on large-scale, permanent spending increases,” he said. “They would finance that through deficits and through big tax increases, including tax increases on workers and on job-creating businesses.”

The New Democrats and Liberals punched back, blaming Harper for the current downturn.

Mulcair said an NDP government would invest in infrastructure, transit and housing. The New Democrat leader touted economic promises aimed at seniors and families with young children in need of daycare, while pledging to be a champion of Canada’s struggling manufacturing sector.

Mulcair said Harper “put all his eggs in one basket” by focusing the Canadian economy on the oil and gas sector, which has been rocked by a downward price spiral.

Mulcair also chided Harper has being the only Canadian prime minister to have presided over two recessions.

He was referring to the recession of 2008 and the fact that economists have suggested the economy likely contracted in the second quarter of the current fiscal year after also pulling back in the first quarter — a technical recession.

Asked about falling oil prices and the effect on the budget, Trudeau said a full Liberal platform would be released soon.

“We have to recognize that Stephen Harper has put us into deficit right now,” Trudeau said in Belleville, Ont.

He also slammed Harper for not being able to deliver “the kind of growth” the economy needs.

“Right now, with the instability on global markets, there are an awful lot of Canadians worried about their retirements, looking with anxiety at the coming years,” Trudeau said.

“That’s where Mr. Harper’s plan to give benefits and advantages to the wealthiest Canadians has failed to create the kind of growth that we need.”