Feschuk: Do you love your dad? Vote Harper! 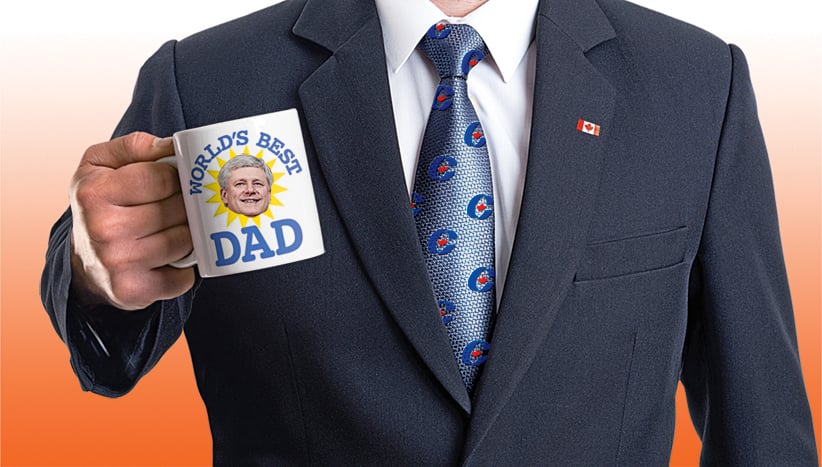 This past Sunday, the Prime Minister’s Office issued a statement to “pay tribute and show our gratitude to all fathers and grandfathers from coast to coast to coast, and celebrate their commitment to the well-being of their families.”

This kind of standard puffery defines a whole genre of government communications: Put out a statement that no sane person will ever read, that argues a position with which no awake person could ever disagree. That treaty sure is important. That religious holiday sure is nice. That dead person sure was great.

During my time in government, I was once called in to crank out a last-minute Canada Day statement. Always the visionary, I boldly advanced the thesis that one particular country is, in fact, the very best country in the world. I won’t spoil its identity for you—you’ll have to wait for the TV adaptation of Liberal Government Statements 2004-06, starring William Shatner and Kiefer Sutherland as the lead characters, Thoughts and Prayers.

The Conservatives’ June 21 release initially seemed every bit as anodyne. For three paragraphs, it argued the case that good fathers are terrific, and super, and also important. But it didn’t end there. The statement went on to list an array of Harper government programs designed to “support fathers . . .  and allow families to spend more quality time together while keeping more money in their pockets.”

Go back and read that last bit again. Do you see what happened? Stephen Harper found a way to politicize Father’s Day. Vote Harper or you’re on your own, Pops!

This opens up a whole new arena of partisan conflict. The ensuing rhetorical slap fights are going to be glorious. Conservatives using Christmas to assail the Liberals for threatening to bankrupt Santa’s workshop with a carbon tax. Justin Trudeau using Valentine’s Day to accuse Tom Mulcair of being soft on back hair. The NDP using Arbor Day to compare Joe Oliver’s personality to a tree.

Surely Harper’s best people are already crafting a statement for Oct. 12, which, crucially, falls just a week before the election. Expect something along the lines of: “Thanksgiving is a time for family, reflection and gratitude. For instance, your family can reflect on how grateful you are to live in a country in which the government allows employed tradespeople to write off up to $500 worth of new tools each year! Also, if Thomas Mulcair is elected, the NDP will legislate forced veganism, and millions of uneaten turkeys will roam the hills and streets of our country, feasting on the ankle flesh of fearful children. Happy Thanksgiving, everyone!”

Or perhaps it’s optimistic to assume Conservative staffers have had time to think about future holidays. They’ve been swamped with having to deal with the many government members who’ve been announcing they won’t be seeking re-election. Each of these political exits demands a statement of tribute from the Prime Minister.

In an effort to lighten their load, here is a simple template the PMO can use to comment on each future departure:

OTTAWA—Prime Minister Stephen Harper announced today that he has been (check one):

Over the course of many years in Ottawa, the member was personally responsible for a number of notable accomplishments, including (check all that apply):

Like many who have served in the Conservative caucus in this 41st Parliament, he/she will leave behind a legacy of (check both):

The Prime Minister said: “Let the record show that, whenever it came time to make a tough decision on behalf of the people of Canada, the member could always be relied upon to (check one):