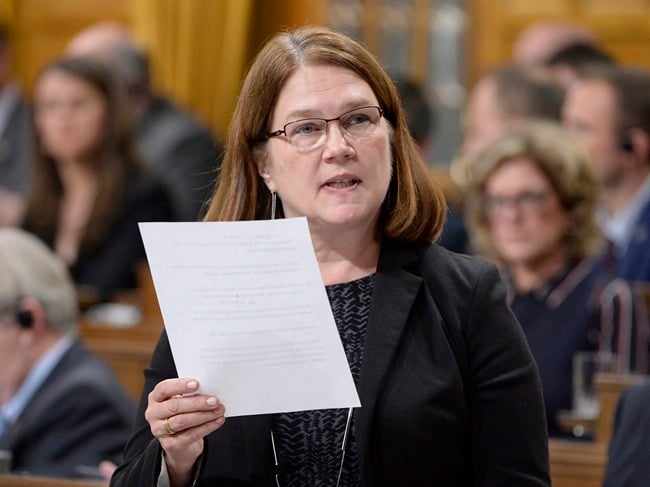 Health Minister Jane Philpott answers a question during question period in the House of Commons on Parliament Hill in Ottawa on Wednesday, November 16, 2016. (Adrian Wyld/CP)

The federal government was able to invest $270 million in the last budget for health facility infrastructure, Philpott said, but she acknowledged programs and facilities are a far cry from what they should be.

“It is going to take time and we are going to, frankly, need more resources to be able to do better,” she said.

At the rate adopted by previous governments, expansion plans for health facilities would have taken “hundreds of years,” with just one or two nursing stations being handled each year, Philpott added.

“In many communities there are nursing stations or health centres — they have had very little done in the way of improving the facilities and expanding them as needed,” she said. “We said that’s unacceptable.”

Health Canada has health facilities in 366 reserves, not including British Columbia.

Money isn’t the only problem, Philpott added. Colonialism, racism and intergenerational trauma are all connected to health challenges for First Nations people.

Following Wednesday’s committee testimony, Philpott also acknowledged the problem of child sexual abuse in aboriginal communities — the focus of a recent investigation by The Canadian Press.

“It is something that has to be discussed,” she said in an interview.

During Wednesday’s hearings, NDP Indigenous affairs critic Charlie Angus pressed Philpott about the fact Health Canada does not track the number of First Nations children denied mental health services, despite the fact they are at higher risk of suicide.

“How can you tell us you are actually looking after these children if you don’t bother to track?” Angus said, describing the situation as “a form of systemic negligence.”

Philpott referred the question to Health Department official Sony Perron, who said denials are not tracked because the service is coming from private providers.

“We confirm that we will be covering the cost,” Perron said.